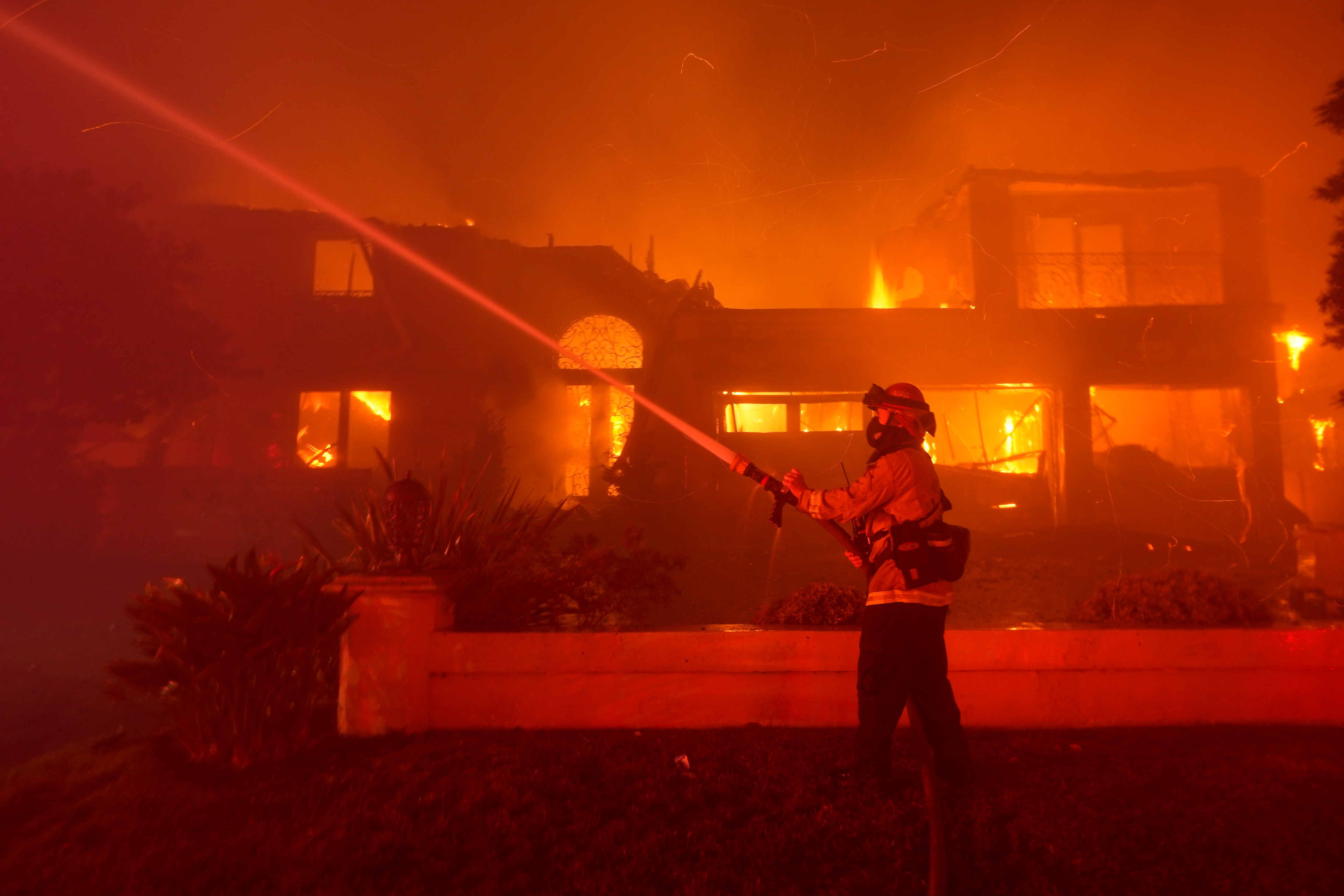 The largest wildfire in the US spread to mountain resorts in northern New Mexico, prompting officials to issue more warnings for more people to be evacuated.

Meanwhile, a wildfire that broke out along the Southern California coast Wednesday afternoon sped through coastal bluffs containing multimillion-dollar mansions and burned at least 20 homes, firefighters said. The blazes were fanned by gusty sea winds but died out on Wednesday night. No injuries were reported, but several streets were evacuated.

The fire that occurred at Laguna Niguel was relatively small at about 200 acres (81 hectares), but the wind drove embers into palm trees, attics and dense, dry scrub on hillsides and steep ravines that had not burned in decades, Orange County Fire Authority chief Brian Fennessy said at an evening news conference.

Fennessy said climate change has caused even small fires that previously would have been easily contained to extreme threats to life and property across the West.

As night fell, New Mexico fire department officials said the fastest-moving blazes continued northeast along the eastern front of the Sangre de Cristo range at the southern end of the Rocky Mountains — away from the region’s largest population center in Taos, a well-known Tourist enclave 40 miles (64 km) south of the Colorado Line.

“No issues in the Taos area at this time,” Fire Chief Todd Abel said. “The fire wants to move a little to the north and east. But we will still be careful.”

Some aircraft were able to fly despite wind gusts in excess of 45 mph (72 km/h) to drop retarding agents on the fire. And some evacuation orders have been relaxed along the south flank of the fire near Las Vegas, New Mexico — more than 50 miles south of the blaze on the north edge.

Additional crews have been deployed to join the more than 1,800 staff battling the blaze, and forecasters said conditions should be more favorable through the weekend, if crews can hold their own through another red flag warning stretch through Thursday night.

On Wednesday, the most active part of the wind-fueled fire north-east of Mora threw hot embers further into unburned area, giving the fire an even greater foothold in the bone-dry landscape.

“Another hot, dry, windy day. There are no surprises there,” fire meteorologist Makoto Moore said at the briefing in Las Vegas Wednesday night.

The towering plume of smoke created by the raging wildfire could be seen hundreds of kilometers away on Wednesday afternoon, but it left Taos residents more nervous.

“I think everyone’s a little nervous,” Karina Armijo, a city spokeswoman, said Wednesday, adding that she’s busy taking calls from people wondering if it’s still safe to visit. “It’s hard to say what’s going to happen in a week or three weeks – or even tomorrow.”

In winter, the challenging ski slopes north of the city attract people from all over the world. Just last month, the Taos Ski Valley hosted the World Pro Ski Tour championship races. Art galleries, adobe churches and a rich history of Hispanic and Native American cultures are attractions in the warmer months, along with the aspen-covered biking and hiking trails that criss-cross the region.

The fire has already burned through a wooded landscape held sacred by country folk, many who have lost homes that have been in their families for generations. Some residents who were allowed to return Tuesday and Wednesday found only charred debris. Others were luckier as the flames swept around their homes.

Firefighters worked to protect buildings around the towns of Mora and Holman and in smaller villages to the north, while authorities closed many roads in the area due to firefighting, smoke and the risk of fire.

“This is tough firefighting business,” said Dave Bales, firefighting commander, in a briefing. “It’s not easy, especially with the fuel species we’re in, ponderosa pines, mixed conifers, even down to the grass. If we can’t fly airplanes, if we can’t get people right on the edge of fire as it hovers over us, that’s a big worry for us.”

A federal disaster has already been declared over the blaze, which is in part the result of a pre-emptive fire that escaped containment on April 6 after clearing brush and small trees so they could not serve as wildfire. This fire merged with another wildfire a few weeks later.

Crews were also battling a smaller fire near Los Alamos National Laboratory, a key government nuclear research facility tapped to increase production of plutonium components for the nation’s nuclear arsenal. Most staff began working remotely this week as the lab and the adjacent city prepared for possible evacuations as a precaution.

Crews working on this blaze have used heavy machinery to clear vegetation and build more fire lines in hopes of keeping the blazes from approaching the community.