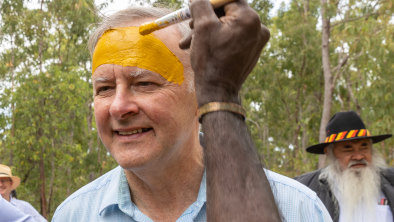 The question of division arises from this question of jurisdiction. Many people who are uncomfortable with the voice are concerned that if it leads to special rights that apply to one race of people but not to others, it will cause community division. Alternatively, could the voice guide legislation affecting all Australians?

Some a Voice supporters (who have nothing to do with the organized campaigns) argue that white settlers have been making laws for tribal peoples for centuries and maybe it’s okay if the tables are turned. This may or may not make sense depending on your perspective. But indigenous advocates are aware that they only want to have a say on matters that directly affect them. This must then be made clear in the constitutional amendment and the model to be enacted.

The third question, identification, arises from a phenomenon best captured in the last census. The number of people identifying as Indigenous has increased by 25 percent. As noted on these pages, when the census results were released, Indigenous community leaders themselves are divided over the significance and implications of this jump.

On the one hand, it is seen as positive that more people are now comfortable with and proud of their indigenous heritage. On the other hand, people who re-identify as indigenous can leave established communities feeling threatened and undermined. This fear is dramatized in the disturbing work of Indigenous playwright Nathan Maynard. At what price?, in which he poses the question: are they legitimate or are they “checkboxes”? How potential members of the voice are identified – assuming they will represent Indigenous Australians – becomes a critical detail.

The longer these concerns remain unanswered, the more they crystallize into a single overarching question repeatedly asked by readers of this legal notice in the 600 or so comments to a recent column by constitutional scholar Anne Twomey.

Twomey argued that it would be wrong to present more details as it would pre-empt parliamentary work on the structure of the vote. Many readers have asked why, if the model and detail are to be left to the legislature, is it even necessary to enshrine them in the Constitution.

Having had some campaigning experience, I can tell you that there is no worse place to start than a position in which community issues have been neglected for so long that they become fixed positions.

Albanese allowed and ‘yes’ supports some leeway by presenting the amendment wording as a draft. Now is the time for the Prime Minister to have a constructive public debate on a model and wording that would address the community’s detailed questions. If nothing comes, I fear that a government that hoped to lead the nation to reconciliation will bring division and shame instead.

https://www.smh.com.au/national/the-unanswered-questions-undermining-support-for-the-voice-20230106-p5cask.html?ref=rss&utm_medium=rss&utm_source=rss_national Why yes activists need to do more