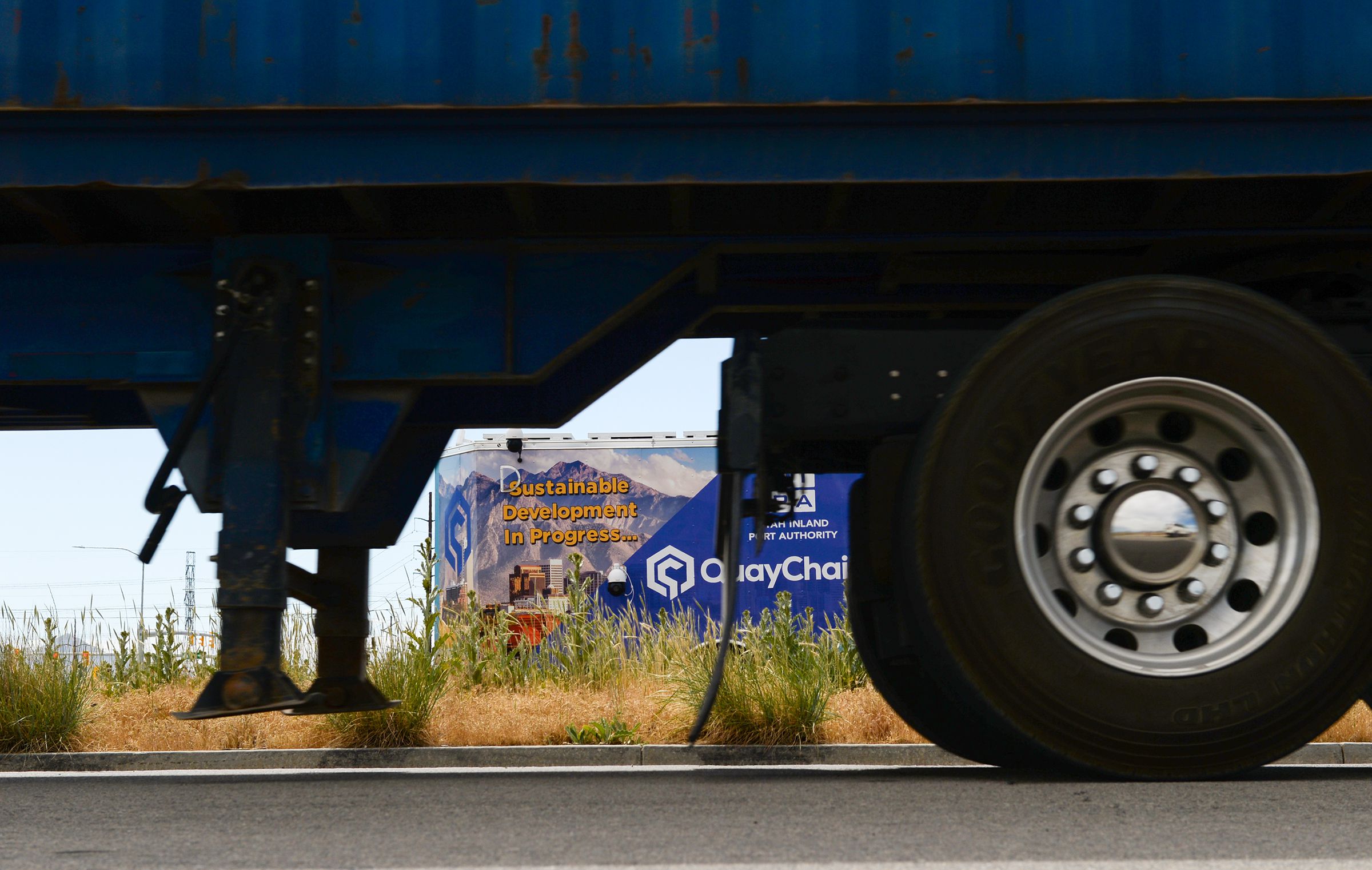 The Utah Inland Port Authority has touted its Intelligent Crossroads Network as the “foundation” of Utah’s future supply chain.

They first began promoting Intelligent Crossroads in August 2021, but provided little information about it other than that it was a private 5G network, artificial intelligence, and a partnership with QuayChain (pronounced “keychain”).

More details emerged during an informal meeting between port opponents and port officials, where the Port Authority’s technology director said the network would include about 250 cameras in Salt Lake City’s northwest quadrant. These cameras would capture and process identifying information about trucks and cargo.

A recently published video describes in a nutshell what QuayChain is building for the inland port.

“The first deployment for us is a mobile trailer,” says Andrew Scott, CEO of QuayChain, in the video, “which contains Intel computer cameras and sensors.”

Cameras will eventually be placed throughout the port and connected to a private 5G network. Instead of going to a central server for processing, the large amounts of collected video data are then computed at the cameras themselves, or what Scott calls the “edge.”

What the contract says

Following a public inquiry, The Salt Lake Tribune learned that the Port Authority had issued QuayChain a $2 million contract on Aug. 23, but it hasn’t been advertised.

“As we tried to decide how to proceed, we spoke to a number of port authorities around the world,” Jack Hedge, the inland port’s chief executive, said in an interview. “No one was aware of anyone doing anything like this.”

The contract funds an initial two-year pilot program with about two dozen cameras to see if QuayChain’s AI will work, Hedge said. Once the full network of hundreds of cameras is built, QuayChain will have an ongoing contract to manage and anonymize the data. The company can further capitalize on this by selling subscriptions to the data to freight companies and freight handlers.

Hedge confirmed that the Port Authority did not issue a call for proposals when it hired QuayChain to build the Intelligent Crossroads Network.

(The Utah Division of Purchasing and General Services declined to comment on this story because the inland port has its own procurement agency.)

“We looked closely at the market … pretty closely,” Hedge added, “and no one else has done what we’re talking about.”

That cannot be the case. QuayChain appears to be assembling off-the-shelf products, including existing AI technology on Intel devices, to process images and transmit the results over a wireless network. QuayChain does not appear to hold any patents. And several ports around the world appear to be building comparable computer vision and data networks.

“The techniques they use may have their own implementation,” said Tucker Hermans, an associate professor in the University of Utah School of Computing who reviewed the QuayChain contract. “But it could literally be a thesis or masters project for a student in my lab.”

A startup called AllRead has successfully tested a similar system in the port of Barcelona. A company called Nanonets built a parallel machine learning system for a large cargo handler in India. Likewise, management consulting firm Deloitte is building an AI cargo tracking system for the Vancouver Fraser Port Authority. It even boasts its ability to process data “at the edge,” just like QuayChain’s promotional video.

The only thing the Utah Inland Port Authority seems to be poking about the Intelligent Crossroads Network that these other systems aren’t is their private 5G network, but building 5G connectivity isn’t exactly new or novel.

“The question of why [the contract] didn’t bid,” Hermans said, “is relevant.”

What QuayChain has to say

Little information is available about QuayChain and the work it has done for ports in the past. The website includes a list of “customers” and “partners,” but the list only references vague industries such as “airports,” “utilities,” “public safety,” “rental companies,” and “intermediaries.” The only actual customer or partner that QuayChain specifically names is the Utah Inland Port Authority.

According to the contract with the river port, QuayChain is located in San Pedro, California. It registered its business activity in September 2018.

Scott, the company’s founder and CEO, declined an interview request. After The Tribune emailed a list of questions, he responded with an explanation.

“The QuayChain system will make it possible [the Utah Inland Port Authority] Achieve sustainability goals with connectivity that makes environmental data visible,” it said. “This is unique as ports have traditionally been ‘data black holes’. QuayChain combines private LTE/5G with edge AI solutions to power the supply chain with the data to make zero-emission infrastructure investments and other decisions to improve sustainability and efficiency. QuayChain is the first company worldwide to offer this service.”

Scott didn’t respond to questions about whether he or his company held patents, or confirmed whether he planned to sell subscriptions to QuayChain’s data. He also gave no information about previous customers.

However, Scott and Hedge appear to have overlapping experiences working for the Port of Los Angeles, according to their LinkedIn profiles. Hedge managed that port’s real estate and freight from 2012 to 2019 before becoming general manager of the Inland Port of Utah. Scott worked as an “advisor to the managing director” at the Port of Los Angeles for about a year before founding QuayChain in 2018.

Hedge confirmed that he knew Scott and QuayChain from his “work in Southern California.”

He added that he is aware of at least two clients that QuayChain has previously worked for: APM Terminals, a Europe-based port operator with a pier in Los Angeles, and Yusen Terminals, an international company that also handles cargo in Los Angeles.

A spokesman for APM Terminals said in an email that it had approached QuayChain as a “potential provider” of a wireless networking solution for the company. After reviewing a proof of concept, APM chose Nokia instead.

“Proof of concept was discarded,” the spokesperson wrote, “and we were never able to engage [in] any business with QuayChain.”

Reached by phone, a spokesman for Yusen Terminals confirmed that QuayChain was used as a provider around three years ago, but the relationship apparently didn’t last long.

“They didn’t have the skills that we were specifically looking for,” the spokesman said.

https://www.sltrib.com/news/environment/2022/06/03/why-did-utah-inland-port/ Why did the Utah Inland Port award this California company a $2 million no-bid contract?

Florida boy, 10, in jail for texting with guns

According to the Yale study, companies that left Russia after the invasion of Ukraine are rewarded with inflated stock market returns – and those that stayed are not