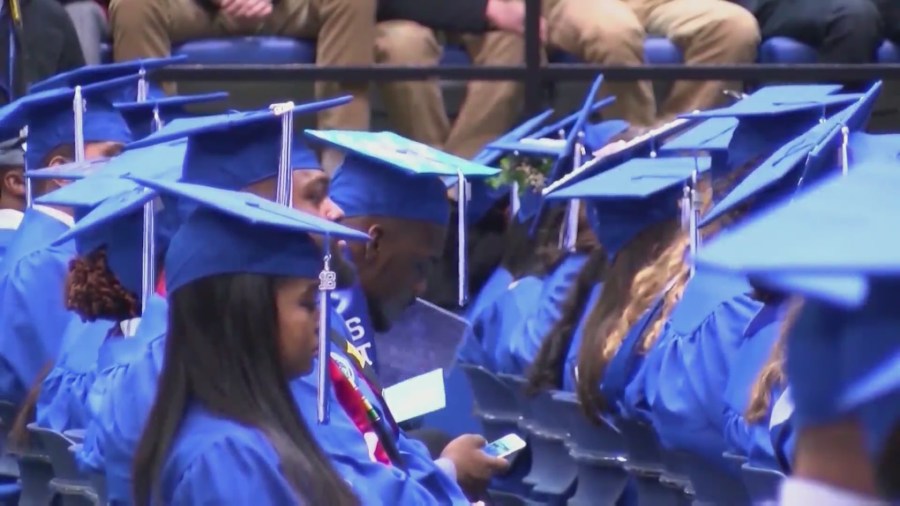 JEFFERSON CITY, Mo. — The average amount a Missouri college student borrows to pay for school is approximately $35,000, according to the Department of Education.

In August, President Joe Biden announced that 43 million Americans would see their student loan debt paid off under his forgiveness plan. Missouri is right in line with the median student loan debt, with the overall average being $35,889.

US Secretary of Education Miguel Cardona said the president’s plan will help fix a broken system.

“It’s life-changing for so many people,” Cardona said. “We know the pandemic has affected us all and some more than others. We want to make sure our borrowers are no worse off than they were before the pandemic.”

According to the educational data initiative from 2022, 833,000 Missourians owe money for their college education. That is about 13.5% of all residents. Under Biden’s plan, Americans earning less than $125,000 annually will have up to $10,000 forgiven of their federal loans. Pell Grant recipients receive up to $20,000.

“Everyone knows college expenses are out of control,” Cardona said. “We’re going to do it. We increase accountability, we go after those who have taken advantage of students.”

Top Story: On the trail of the magic number of cardinals

“I don’t think the President has the authority, number one, or the right, number two, to take the money from hard-working Missourians and give it to some of the richest people in the nation, because that’s what’s happening here,” Hawley said. “The people who benefit are disproportionately in the top 10 to 20 percent of all income earners in the United States.”

The Institute for College Access and Success shows that graduate students from the St. Louis College of Pharmacy and Missouri Valley College at Marshall, both private schools, have the highest debts in the state at $62,085 and $49,000, respectively. College graduates from the University of Missouri – Columbia walk away with $28,457, followed closely by Missouri State University at Springfield with $27,075. The lowest average student loan debt in Missouri is Linn State Technical College at $1,800.

click here to see where the rest of the state’s colleges and universities rank.

“Who pays for this?” said Hawley. “Working Missourians are paying for it, people who didn’t go to college got a job trying to support a family, and now their tax dollars are being illegally taken to illegally pay off those student loans.”

Attorney General Eric Schmitt, the Republican nominee for the US Senate race to replace Senator Roy Blunt, has previously said he is considering legal challenges to Biden’s plan.

Cardona said that under this loan forgiveness program, 90% of the money used for loan debt relief goes to Americans earning less than $75,000.

“We help ordinary Americans trying to make ends meet, the middle class and those who are going through hard times,” Cardona said. “I would say to the senator, look at the facts and it’s hard to argue. People will now be able to get back on their feet, buy a home, contribute to the economy and yes it will get people back to school.”

Additionally, under the plan, Biden caps the number of years a civil servant, such as a nurse, teacher, or police officer, has before the loan is fully forgiven. It lowers monthly repayment rates for bachelor’s loans to 5% of the borrower’s monthly income.

“We can do it, so they don’t pay anything for a month and then the interest doesn’t accrue, so they don’t get buried in interest over time,” Cardona said. “If you’ve made loan payments for 10 years and served the public for 10 years, you should now have full loan forgiveness.”

The application for forgiveness of public service loans is open until October 31. click here for more informations.

“We’re using the authority we have to help everyday Americans get back on their feet and get on with life,” Cardona said.

Cardona said the president’s administration is looking into reimbursing Americans who paid off their federal student loans during the pandemic.

In addition to the loan forgiveness, the administration also extended the loan payment pause through December 2022. Cardona said the U.S. Department of Education has information for about eight million borrowers. He expects the loan forgiveness process to begin within the next month.

https://fox2now.com/news/missouri/which-missouri-colleges-do-graduates-have-the-highest-amounts-of-debt/ Which Missouri Graduates Have the Most Debt?

I love designer bags, I've spent £15,000 on a Birkin to wear my baby's nappies in and I'm buying her a Dior for her birthday