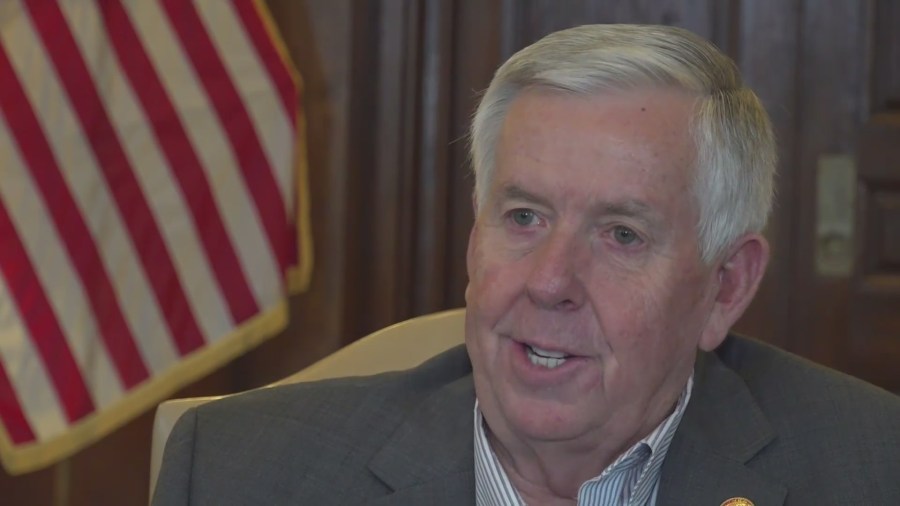 JEFFERSON CITY, Mo. — Gov. Mike Parson wants to use the state’s record budget surplus to widen Interstate 70, but only in certain places.

A big focus of this year’s State of the State speech was the governor’s request for lawmakers to spend $900 million to add an additional lane of traffic to both directions of I-70 in the suburbs of Kansas City, St. Louis and add Columbia. Missouri currently has a multibillion-dollar surplus, but Parson said his reason for only focusing on those congested parts is because of cost.

“In this state, we’ve talked for years about doing something on I-70, and you know the talk has to stop and action has to begin,” Parson said.


It’s a major project that comes with a hefty price tag. Parsons’ proposal to widen and rebuild the I-70 corridor is expected to cost $859 million. The proposal would widen the Interstate to three lanes in each direction for nearly 20 miles from Blue Springs to Odessa, 20 miles from Wentzville to Warrenton, and 13 miles from Midway to Route Z in central Missouri.

“I’m not sure we can really afford to do all that right now because you have to think this through over the long term,” Parson said. “It’s a cautious way of doing it just in case the worst case scenario happens, but I’m really confident that this way we can complete the entire project. If we can get these big hubs set up, then we’ll be able to connect it together.”

“I mean it honestly when I say that Gov. Parson’s budget was a good budget in our opinion, it was a decent budget,” said Senate Minority Leader John Rizzo, D-Independence. “I think we need to figure out I-70, and if we can’t figure it out with the surplus we have right now, then I don’t know when we’ll figure it out.”

“Whether that’s the local levels, whether that’s banks, schools, hospitals, and try to get them to incentivize to get them to set up daycare systems that they run and they have and what for their area is the best,” Parson said. “It keeps people off work when you’re trying to care for kids, and if you’re one of those young families and you have kids out there, you know the cost factor.”

His budget request also includes the cost of continuing a program for schools to pay each teacher at least $38,000. Under state law, the base salary is $25,000. Of the state’s more than 500 school districts, Parson said more than 356 districts participated in the program last year and increased salaries for more than 6,000 teachers.

Rizzo said $38,000 is a nice improvement but nowhere near what it takes to start a family.

“If you’re a single mom with two kids and you want to be a teacher and you have a passion for it, I don’t know how you can make ends meet,” Rizzo said. “We will continue to push for more.”

Trending: Circle K Gas: 40 cents off a gallon in Missouri, Illinois on Friday


Parsons’ budget request also earmarked $250 million for a rainy day education stabilization fund to be used in the future.

“I think it’s a good idea, I also think that if you used the fund for formulas, it could focus on teacher salaries,” Rizzo said. “Then you can free up some dollars to do raises or something, but I absolutely think it’s a good idea to set aside a bunch of money for the future that we know we’re going to need at some point.”

Parson also plans to invest $4 million in a new maternal morale plan. He is calling on the Department of Health and Senior Services (DHSS) to implement a new plan to support maternal deaths. DHSS estimates that 75% of maternal deaths are preventable with at least one change in treatment, whether in the patient, provider or community. Missouri is currently ranked 44thth in the nation for its unusually high maternal death rate.

“It’s a sad statistic when you consider that only one service is required in this process and you save 75% of lives,” Parson said.

Where the difference between party lines lies is in public safety. The governor is proposing $50 million in public safety grants for schools after a deadly St. Louis City shooting last fall at Central Visual and Performing Arts High School.

“When the day comes, make sure these schools are prepared, the building is secure and the action is taken when you need to take action,” Parson said. “I think what we’ve seen here in this state is how the school has reacted, how law enforcement has reacted. Taking out the shooter is the best thing that ever happened.”

Across the aisle, Democrats say tougher laws are needed.

“That incident in St. Louis, that was a complete tragedy,” Rizzo said. “People did the right thing, they called the police and said this guy shouldn’t have a gun and there was nothing they could do about it because we don’t have a red flag law.”

Parson is also asking lawmakers to increase wages for government employees by 8.7%. He’s also calling for a $2 an hour pay rise for employees who work overnight. There are currently 7,000 vacancies in the state government, which is why the governor said he would like that request to be on his desk by March 1 at the latest.

Rizzo said the governor is making up for years of underfunding. He believes Parsons’ proposals will be harder to push through by Republicans but favored by Democrats.

“It’s good to finally be able to dig out of the hole left by the Republican majority for the last two decades,” Rizzo said. “I think current Republican ideas are 10-year-old Democratic ideas. The hardest part will be getting through this ultra-conservative legislature. He’s going to have a lot more problems in his own party than he does in the Democrats.”

Another priority for Parson was spending $35 million to improve railroad crossings across the state following a fatal Amtrak train derailment last June in north-central Missouri. Four people were killed after the train struck a dump truck at a junction with no warning signs in Mendon.

“If you lose four lives and multiple people get hurt, that could potentially have been avoided if you had a crossing there,” Parson said.