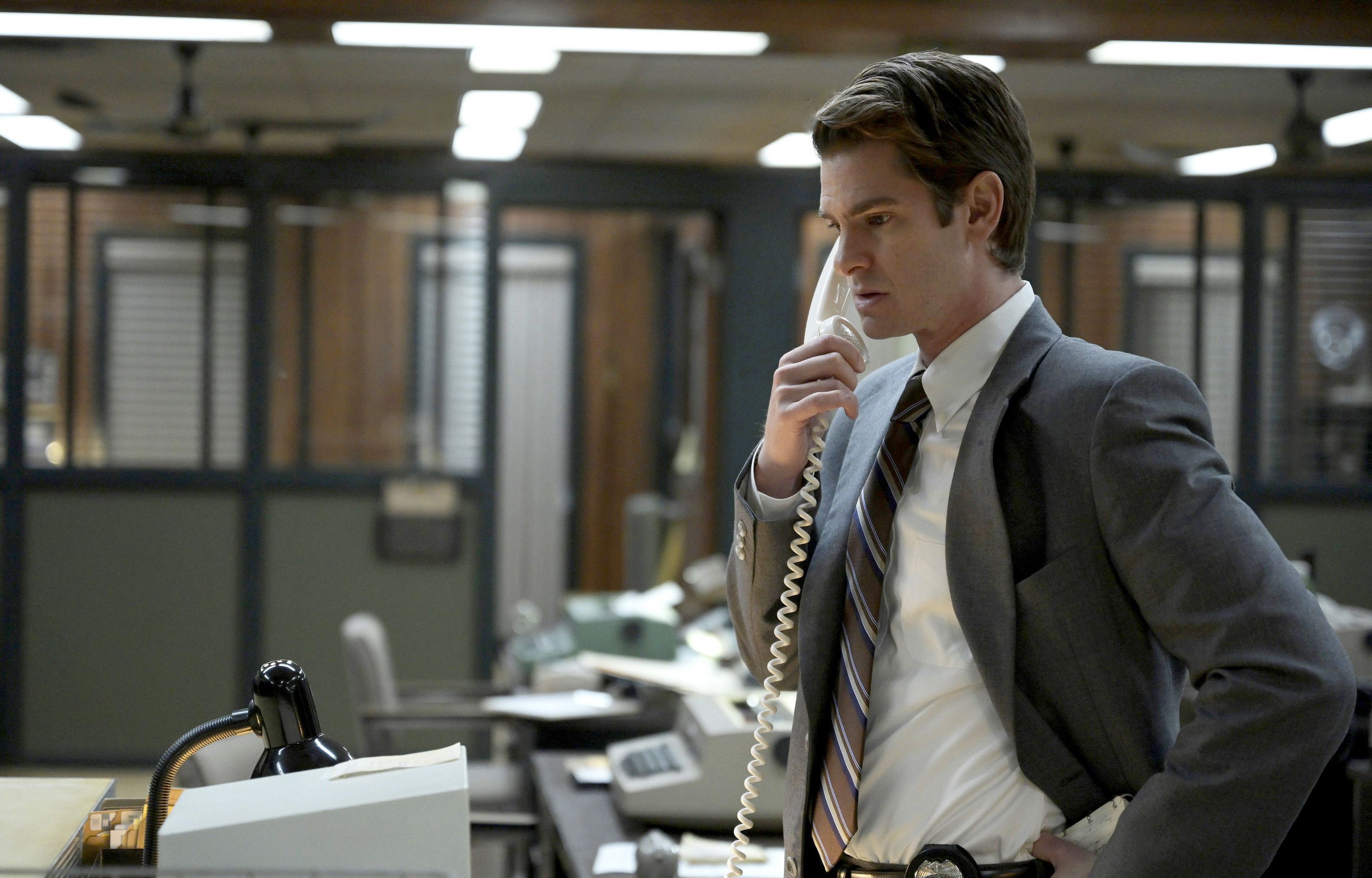 “Under the Banner of Heaven,” a new Hulu miniseries with an all-star cast that debuts Thursday, may not be making many members of The Church of Jesus Christ of Latter-day Saints happy. But neither did Jon Krakauer’s 2003 bestseller, on which the seven-episode series is based.

The miniseries closely follows Krakauer’s account of the gruesome 1984 murders of 24-year-old Brenda Lafferty, played by Normal People’s Daisy Edgar-Jones, and her 15-month-old daughter in Utah County. Like the book, it explores the underworld of Mormon fundamentalism and polygamy, and follows a family of brothers’ descent into insanity, misogyny, and violent religious extremism.

But Hulu adds a fictional element to the character of Detective Pyre (pronounced “Pie-ree”), a mainstream devout church member whose investigation is loosening the anchors of his conventional, taken-for-granted Mormon beliefs. Andrew Garfield shines in this role with absolute credibility as a good-natured detective, returned missionary and family man.

I approached the series with some caution. I read Krakauer’s book nearly two decades ago, but it is notoriously full of historical errors and misleading generalizations, which prompted the LDS church to make several statements of protest or clarification at the time. Some professional historians have also questioned Krakauer’s source material and conclusions – particularly his general idea that if Mormonism could be violent in the 1830s or 1840s, it must surely still be violent in 1984, when Brenda Lafferty was killed, and in the time after. 9/11 era when “Banner” was released.

Krakauer’s book routinely violated the fundamental premise of the study of history to carefully record the changes over time. Historians do not have the luxury of pointing out a few turning points from the distant past and holding them up as “evidence” of this or that current event, as if nothing had happened in the meantime. Yet Krakauer’s book repeatedly did just that, drawing direct lines from Joseph Smith’s or Brigham Young’s actions up to the 1984 murder of Brenda Lafferty and her child.

More than any specific historical inaccuracy, however, was the book’s underlying theme: that religion is deeply illogical and often dangerous. “Faith is the polar opposite of reason, unreason is a crucial part of spiritual devotion,” wrote Krakauer. “And when religious fanaticism crowds out rationalization, all bets are suddenly off. Everything can happen.”

“Faith is the polar opposite of reason.” Think about it. From Krakauer’s point of view, this means that not only violent extremists like the Lafferty brothers are to be feared. They’re not even just Latter-day Saints. All of us, anyone who dares to believe that God can inspire people, speak to them, or guide their actions.

According to Krakauer, these common elements of belief are completely irrational and therefore dangerous breeding grounds for violence. (Regardless, some of the greatest atrocities of the 20th century took place within state systems that did not support religion. It would be news to Stalin’s millions of victims that religion was responsible for their deaths.)

I hoped that in the nearly 20 years between Krakauer’s book and Hulu’s miniseries, these fundamental misconceptions about religion would be challenged and found wanting. It was heartening to hear that one of the miniseries’ creators, Dustin Lance Black (who won an Academy Award for Best Original Screenplay for “Milk”), grew up as a Latter-day Saint and made an effort to speak out with church members and Ladders about the proposed series when it was in development.

(ABC/Image Group LA) Dustin Lance Black is the creator, executive producer and showrunner of Under the Banner of Heaven.

Mormons “are so often stereotyped,” Black told reporters at a news conference last month. So, he said, he asked church leaders and members if they wanted to correct something in Krakauer’s book, and he then tried again to draw a clear line “between fundamentalists and members of the LDS Church.”

I think he succeeded. Throughout the series, it is crystal clear that there is a vast difference between Fundamentalists (who practice polygamy and are depicted in the series as wearing pioneer clothing and living in gated communities) and the mainstream Latter-day Saints of the early 1980’s.

The latter are shown in orderly nuclear families doing everyday things like kneeling for family prayer or meeting with the bishop to prepare their 8-year-old children for baptism. They own Cabbage Patch dolls and play board games. Local church leaders are portrayed as appalled at polygamy and excommunicate any mainstream members who attempt to practice it.

The series actually takes a good turn by showing that there is some diversity even within the LDS Church. Brenda’s parents are strong Mormons, but they encourage her to pursue an education and postpone the marriage. They are suspicious of the youngest Lafferty brother she is bringing home to meet, thinking his overly conservative family would sound controlling and try to limit their choices. tragically, of course, they are all too right.

However, my overall impression after watching the first five episodes available to reporters is that, despite some additional nuances, the series adheres closely to Krakauer’s core premise: that religion is built on a decaying foundation of violence and a thirst for power. The show adopts Krakauer’s breathless way of cutting back and forth between the distant past and the immediate present. There is a dizzying interplay of short clips from the days of Joseph Smith and Brigham Young, the latter being presented as one-dimensional.

Emma Smith (Tyner Rushing), who objects to both her husband’s polygamy and the cartoonish Young, appears as the heroine as she tries to keep Smith on track. She refuses to condone polygamy or violence.

The general message of these flashbacks is that Mormon history is not as sugary or as faith-promoting as church members like Pyre have been taught to be. A born investigator, Pyre goes down the rabbit hole to find out more, despite being warned by his bishop not to dig any further in the past. The bishop counseled him to “put the things you don’t understand on a shelf” and follow the prophet.

The “Regal” language appears frequently in the fourth episode, a kind of historical anachronism of its own. This is a contemporary phrase used by people whose testimonies of Mormonism have been shattered or who have left the Church because of various historical or theological problems they have encountered.

So Pyre is going through a recognizable 21st century Mormon crisis of faith, set in 1984. I can’t tell what will happen in the last two episodes of the series as I haven’t seen them yet. But it seems likely that the germ of doubt he is now experiencing – not only about the troubling aspects of Mormon history, but also about the ways in which church leaders have conspired around him to obstruct his investigation – will lead to a full-blown break with his faith.

I wouldn’t be surprised if this character either leaves the church or remains a Mormon in name only and puts on a brave face for his wife and daughters. As the series has portrayed him thus far, his earnest kindness and thoughtful curiosity have no place in a religion where violence and oppression are the standard method, though the church hides these impulses under a carefully curated outer facade of love.

At one point, Pyre invokes his status as a priesthood holder in his home to explain that his planned course of action on something is final and his wife must go along with it. You can tell that he hates himself for it – and that he will choose his family when the tension between what his religion wants from him and what his family needs from him becomes unbridgeable because he’s a really good one human is.

At the March press conference, Black indicated that he had seen people severely punished for speaking out against LDS Church leaders. “It’s incredibly dangerous in Mormonism,” he said, noting that people can lose their families and their communities, not just their church membership.

Then he said something else that caught my attention: If you go deep into creativity “in any religion, but especially Mormonism,” the result will either be a musical comedy or it will take a dark and violent turn.

I disagree that these are the only options. And while “Banner” as presented on Hulu has superb dramatic performances and top-notch production, as a person of faith I was left with the same cautious bewilderment I felt after reading Krakauer’s book. Missing here is a world of nuances in which it is possible to remain a believer in a religion and not be inherently irrational or violent.

https://www.sltrib.com/religion/2022/04/25/jana-riess-what-under/ What the Under the Banner of Heaven miniseries, like the book, gets wrong in terms of religion