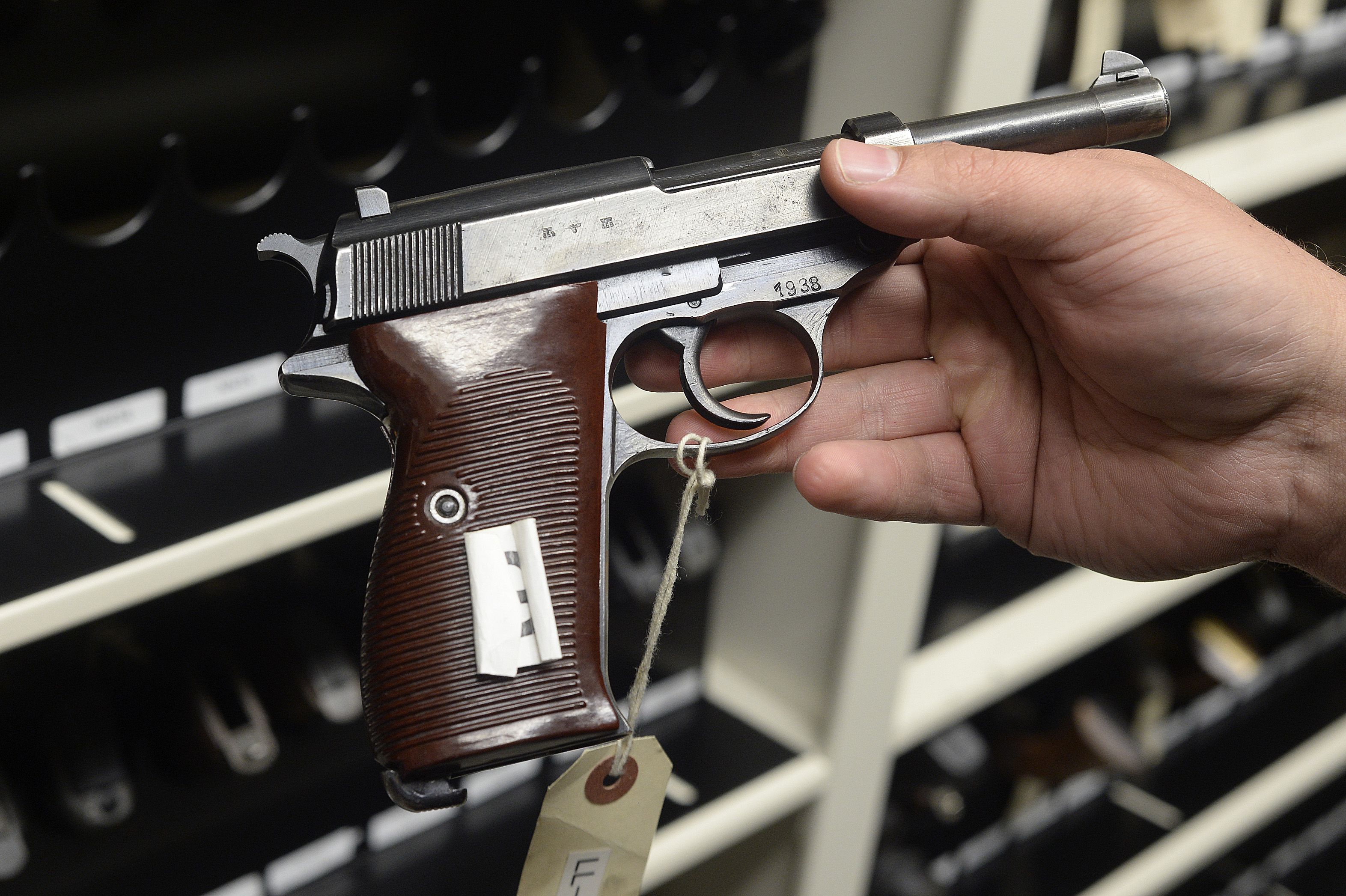 In recent weeks, the US has seen multiple mass shootings, including one in Buffalo, NY and another in Uvalde, Texas. Although President Russell M. Nelson of The Church of Jesus Christ of Latter-day Saints has made at least one comment suggesting gun laws are too lax, the Utah-based faith group has made no official statements about gun violence.

It is clear that many Latter-day Saints love guns. A 2020 survey shows that nearly half of the country’s Mormon households (47%) have a gun (the second highest after white Evangelicals of any faith group surveyed).

Is gun violence a moral issue for Latter-day Saints? Should it be? Or is it purely political?

Here are excerpts from last week’s Mormon Land podcast, which featured two Latter-day Saint historians — Patrick Mason, director of the Department of Mormon History and Culture at Utah State University and co-author of Proclaim Peace: The Restoration’s Answer to an Age of Conflict,” and Janiece Johnson, historian of American religion and author of the forthcoming book American Punishment: The Mountain Meadows Massacre and Mormon Transgressions—picked up the topic.

Is it a moral question?

Johnson • I can’t understand how there can’t be a moral issue when we see this kind of spread [of killings]. Well, how we think we’re going to deal with what we think about gun ownership and the responsibilities of gun owners is definitely up for debate from many different angles. But morally, as we reflect on the persistence of violence, LDS scriptures give us an ever-present message to seek peace, to “complain,” and to do what we must do to find that peace, even in times when where violence seems justified.

mason • Throughout Latter-day Saint writings there is an abiding love of life. Life is a moral issue. Period. In Deuteronomy, God tells the Israelites, “Imagine life and death, so choose life.” As followers of God, followers of Jesus, we are repeatedly and forcefully told to choose life. And yes, it’s a moral question.

Why are church leaders not making a stronger connection between the scriptures and what is happening in this district?

Johnson • We have the example of 2007, the 150th anniversary of the Mountain Meadows massacre, as President [Henry B.] Eyring went to this memorial and spoke specifically about the church’s response. … I actually have his words here. “We are deeply saddened by the truth as we have come to know it. The gospel of Jesus Christ that we champion abhors the cold-blooded killing of men, women, and children. In fact, it advocates peace and forgiveness. What was done here long ago by members of our church represents a terrible and inexcusable departure from Christian doctrine and conduct. We cannot change what happened, but we can remember and honor those who were killed here.” It’s easier to say, “Oh, they’re not like me. Those Mormons who took part in the murder of 120 men, women and children are not like me.” It’s much harder to say, “How like me are you? How do I have that kind of capacity?” Those are much harder questions.

mason • Why don’t we see a clearer and more consistent teaching on this? I think one reason (and there could be many reasons) is that the scriptures and Latter-day Saint history have a violence problem just like they have a patriarchy problem. Indeed, the scriptures, when read face to face, give conflicting messages about violence. There are heroes. There are righteous warriors. There are stories where it seems like God is commanding people to kill people. You have to do some serious theological work to consider these passages because just reading them in their faces makes it seem like righteous people are killing people and God is commanding them to do so. This means, then, that the moral and ethical issues surrounding violence are more confused than perhaps certain other issues.

…[Still], the members profess to be Christians and to follow Jesus Christ, the Prince of Peace. And Jesus was completely non-violent in His teachings and in His interactions with other people. Now people will raise the question of clearing the temple. Even in this case there is no violence against people. And so Jesus is completely and consistently non-violent. And if you’re a Christian, read the Scriptures through the life and teachings of Jesus, among other things. So Jesus becomes the lens through which we read all these other stories. So it’s not the Church of Captain Moroni or the Church of Joshua of Latter-day Saints. It is the Church of Jesus Christ. Well, there are other strategies you can use to relate to Scripture, but I think this is the most effective. You know, it’s the old question, what would Jesus do?

Do you think one of the reasons the church is reluctant to make a big statement is out of fear of offending members who own guns and vigorously advocate the Second Amendment?

(Rick Egan | The Salt Lake Tribune) Captain Moroni – a famous warrior in the Book of Mormon – is portrayed in Mantis Mormon Miracle Pageant entitled Freedom in 2019.

mason • I can never speculate as to what goes on in the minds of senior church leaders, but you know, just do a thought experiment. What if President Nelson stood up at the next general conference and said that guns are the problem in the United States? Explain that he quoted Jesus in the garden where Jesus told Peter to put away his sword. The early church father Tertullian said that when Jesus gave Peter this command, he was telling all Christians to put away their swords. So what if President Nelson used this statement to say that Jesus is asking all of us to put down our weapons? The Anti-Nephi-Lehies are to be our example. We should bury our guns in the ground. So all of you who are on the path of the Covenant, that involves burying your weapons of war. If he made that statement, I can guarantee you there would be a whole lot of people we’d never see at church again.

Johnson • The pandemic gives us an example that church leaders are not afraid of the reaction of members. If you are reading any of the Quorum of the Twelve social media posts [Apostles] During the pandemic … every time they spoke about these public health measures, which became very politicized in the United States, there was significant public backlash, but they didn’t back down and pushed on. So I think yes, there would definitely be those who would react that way. . . . I’m not sure there’s any point in having a prophet who always tells you what you want to hear.

If you were tasked with writing a general theological statement on violence for the church, what would you say and how would you use the scriptures to get there?

(The Church of Jesus Christ of Latter-day Saints) Church President Russell M. Nelson addresses young adults by a fireplace in Las Vegas, 2018. During his speech, Nelson lamented that US law allows “guns to be given to people who shouldn’t have them.”

Johnson • As I have repeated several times, [I would use] that phraseology “ask for peace” that if we choose to be disciples of Christ the Peacemaker, then that is our responsibility. And in my opinion, that means taking steps — be they something legal, something legal, or the steps we need to take in our personal lives — that have that peace as a core goal and are willing to do what is necessary to bring it about .

mason • I would say that the original sin of mankind for Latter-day Saints is not to eat the fruit because we believe in a happy fall. The original sin of mankind is violence. It is Cain who kills Abel. And we see this specifically in some of [church founder] Joseph Smith’s Revisions of the Bible. What tears God apart, what breaks his heart and makes him weep, is not sin in general, but violence in particular, the way people hate one another. We hate our own blood, and then we do violence to each other. This is the cause of God’s greatest sorrow… The Gospels tell us that the result of a mankind consumed by violence is God on the cross. And what does the Book of Mormon tell us? Humanity consumed by violence is leading to the annihilation of not one, but two civilizations. So the Scriptures tell us over and over again that if you worship at the altar of violence, that’s what you’re going to get. And therefore give up war and proclaim peace. Follow the Prince of Peace.

To hear the full podcast, go to sltrib.com/podcasts/mormonland. To read a full transcript and get more exclusive Mormon Land content, go to Patreon.com/mormonland.

The Wall Street Journal: The SEC is approaching rules that could change the way the US stock market works

What is the former US president being investigated for?