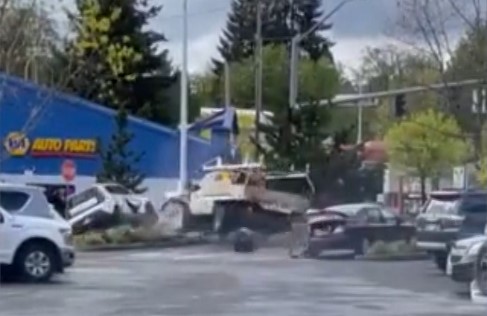 OREGON CITY, Oregon (KOIN) – A driver suspected of being under the influence of alcohol drove into 11 parked vehicles at a mall Thursday night, according to Oregon City, Oregon police.

The driver’s vehicle, a work truck, struck eleven other cars in the Southridge Shopping Center parking lot at approximately 5:30 p.m. The Oregon City Police Department shared a video of the incident which shows the truck crashing into a parked car before reversing and hitting at least two other cars. From there, the driver drove forward and crashed into other parked vehicles.

The truck came to a stop after going over a curb.

In addition to the parked cars, the driver damaged two businesses, police said on Facebook.

The driver of the truck was taken to hospital to be treated for injuries sustained in the collision.

“We are grateful that no one was injured,” police wrote.

The suspect faces charges of driving under the influence, reckless endangerment and reckless driving.