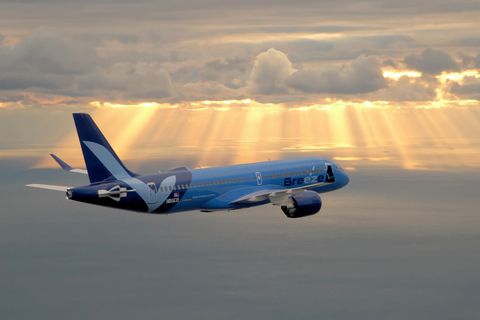 A Utah-based airline unveiled new plans to serve its home state on Friday.

Breeze Airways, a low-cost airline launched last year, will begin flights from Provo to five US cities in the coming months. The announcement coincides with the opening of a $55 million, four-gate terminal at Provo Municipal Airport.

“These are routes that Utahns love,” CEO David Neeleman said in a phone interview.

Neeleman, who also founded JetBlue, said the routes serving the west will be particularly useful for those attending Brigham Young University.

“A lot of them are from these areas,” Neeleman said.

Neeleman said his company is focused on flying out of Provo because Salt Lake City is already well served and this is an opportunity to expand into another market.

“There’s just tremendous growth in the South,” he said.

In February 2020, the company opened its headquarters in Cottonwood Heights, where it employs approximately 70 people. By expanding operations to Provo Airport, an additional 200 employees are to be hired.

Breeze Airways began operating a year ago and flies primarily between airports in the eastern and southeastern United States. It will be the second commercial airline to fly from Provo, after Las Vegas-based Allegiant Air.

Flights to Los Angeles begin November 2 with prices starting at $39.

Clothing sheds light on sexual abuse among Amish and others

MI5 spy ‘attacked woman with machete and had her executed’