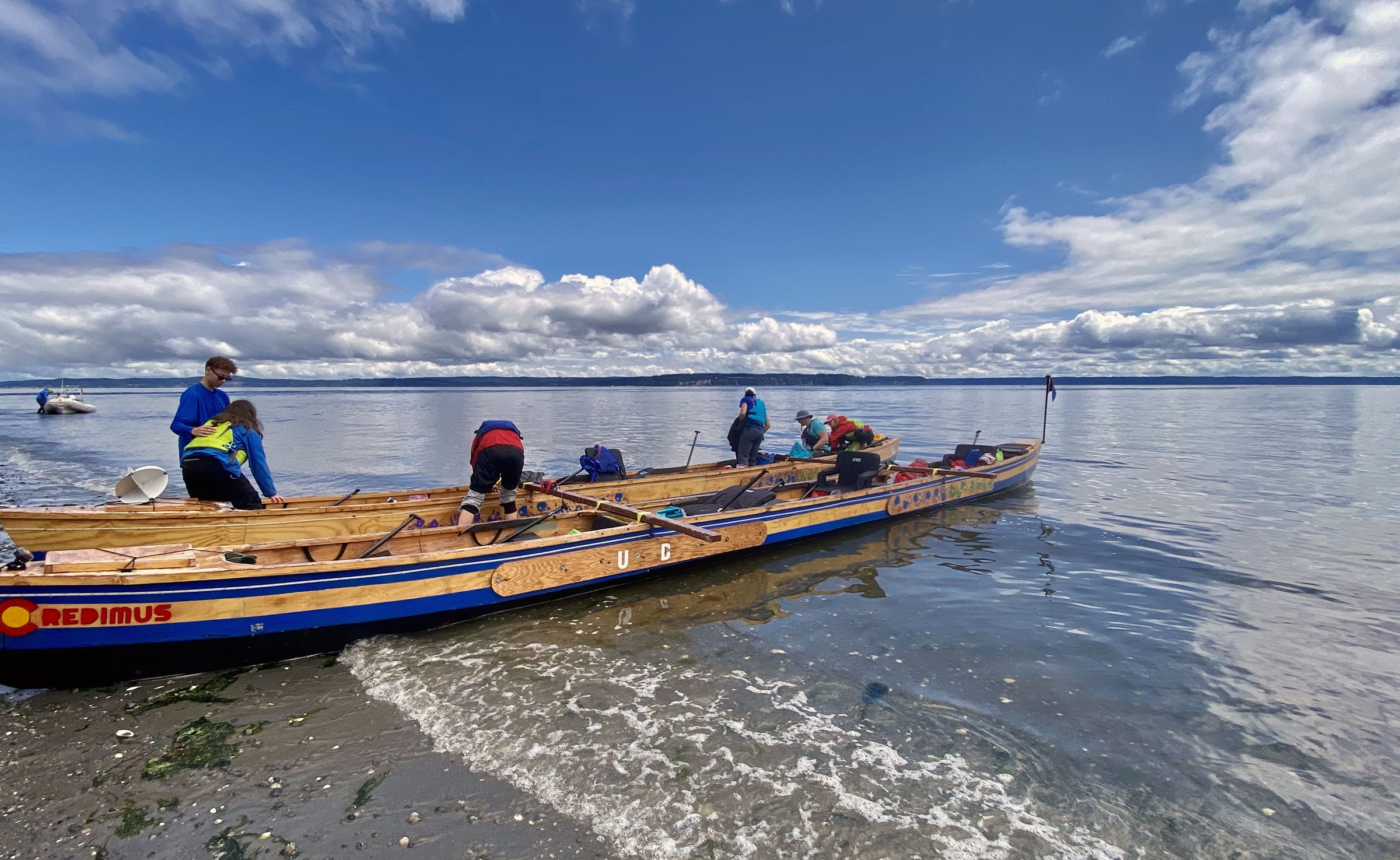 Emily Groves had rowed 50 miles across Puget Sound when the going got tough.

“I couldn’t see the big waves, so I wasn’t scared at all,” Groves told the Salt Lake Tribune. “I was calm and a little confused.”

Groves, who is blind, was part of a team of Utah students who are visually impaired who attended SEVENTY48 last weekend. The race challenges participants to row, pedal or paddle 70 miles from Tacoma to Port Townsend, Washington, across Puget Sound in just 48 hours – no motors or towing are allowed.

For added difficulty, the race started at 7pm on June 10th, so the first rowing lessons took place overnight.

The event is a worthy challenge for even the most experienced seafarers; Many teams never cross the finish line. Standing out among the participants was a team of high school students organized by the Utah Schools for the Deaf and Blind.

But in the early morning of June 12, the USDB team completed their 70-mile journey in just 36 hours – an achievement made even more special by the fact that another USDB team failed to complete the challenge in 2021 .

“I feel like a lot of people don’t expect as much of me as other people do,” Groves said. “When blind people do something cool, it’s in the news because people always think it’s extra hard or extra cool. And maybe from a theoretical point of view it is. But if you’re blind all your life, you don’t have a frame of reference and you don’t think about it that way.”

“My students absolutely could”

(Utah Schools for the Deaf and Blind) The USDB team trained for SEVENTY48 at Lake Powell.

Ryan Greene, USDB Director of Campus Programs for Blind Students, learned about SEVENTY48 through an outdoor podcast. He immediately thought, “My students absolutely could.”

Greene assembled a USDB team to compete in SEVENTY48 last year, but at the 50-mile mark, 6-foot waves made it likely her boat would capsize. They reluctantly withdrew from the race.

“Last year everyone was cheering us on and then we didn’t make it, and it was heartbreaking,” said Ashton Hintze, a member of last year’s team who has Stargardt disease, a type of juvenile macular degeneration that causes central vision loss . “I’ve spent the whole year saying, ‘I need this redemption.'”

Greene felt the same way. After receiving approval from the Utah State Board of Education, the USDB Superintendent, and the USDB Advisory Committee in August, he began planning training. The team’s participation in the race was made possible by enrichment funds specifically allocated to the USDB for its extracurricular activities and programs, so students did not have to pay to participate.

Soon, USDB had a team of eight students from school districts across Utah. Eight students – four girls and four boys aged 14 to 19 – formed the last crew and eight accompanying adults. Hintze and another student from last year’s team also joined.

Hintze, who has just finished her freshman year at Snow College, began training for the race with renewed enthusiasm. Greene scoured the Internet for information on Puget Sound’s currents, depth, tides, and seasonal weather patterns.

During their training sessions on Lake Powell, the crew calculated their average rowing speed. They paddled overnight in Willard Bay to prepare for the 7pm start time of the race. School was soon to be over and race day was approaching.

Groves recalls when the race began: Surrounded by other SEVENTY48 hopefuls, a cacophony of cheers and music swelled around them. The USDB team had their boat draped in LED lights and music blaring from onboard speakers as they departed Tacoma on the evening of June 10th.

The team had purchased a 3D printed map for Groves and another high-contrast map for the other students to orient themselves. By midday on Saturday, the team had reached mile 50 – just 17 hours after the start. Compared to last year, Hintze and Greene felt the team was flying. But then conditions worsened.

“We fought for every inch of water”

(Utah Schools for the Deaf and Blind) Emily Groves, who is blind, uses a 3D map of the Puget Sound.

The team ventured into a part of Puget Sound closer to the ocean and immediately felt the effects: unpredictable cross currents and stronger winds. While they paddled at a steady 3 mph for the first 50 miles, they slowed to a speed of 2 mph, then one.

The tide was coming against them and they battled 4ft waves before finally exiting the channel – with just 7 miles left in the race. But the wind and the waves wouldn’t stop. Greene realized there was no way the team would make it to Port Townsend that night.

The team set up camp for the night and tried to warm up with HotHands hand warmers and hot meals from Jetboil stoves. The students snuggled into their bivouac bags, retaining every bit of warmth. Two students dropped out of the race that night.

“It wasn’t a ‘gimme,'” Greene said. “No one said, ‘Oh, it’s the poor blind kids, we’re going to make it easy for them.’ They’re very used to it, and they hate it. It didn’t feel like it at all. It felt like we were fighting for every inch of water.”

Greene considered starting rowing again at 2am but knew the team needed rest and decided to wait until 6am to start again. And when the sun came up on Sunday morning, the water was crystal clear.

The two students who dropped out of the previous night’s race rejoined the USDB team as they crossed the finish line and placed 71st.

(Utah Schools for the Deaf and Blind) The SEVENTY48 team consists of visually impaired students from Utah and their companions.

“It was such a relief,” said Hintze. “I put so much work into it and as I sat there and thought about it in those moments when it got dangerous and we thought we weren’t going to do it a second time, I was like, ‘No way.’ But once we were a mile away and you could see the land and the people, it felt amazing.”

“It just proved that we can do things that even normal people don’t want to do,” Hintze continued. “I would hope that there would be more opportunities to do things like this. There is always room to grow.”

TikToker shows how seemingly easy it is to open Master Locks

Boris Johnson says it would not be ‘responsible’ if he resigned

Suffolk: Student pilot dies days after being bitten by a mosquito