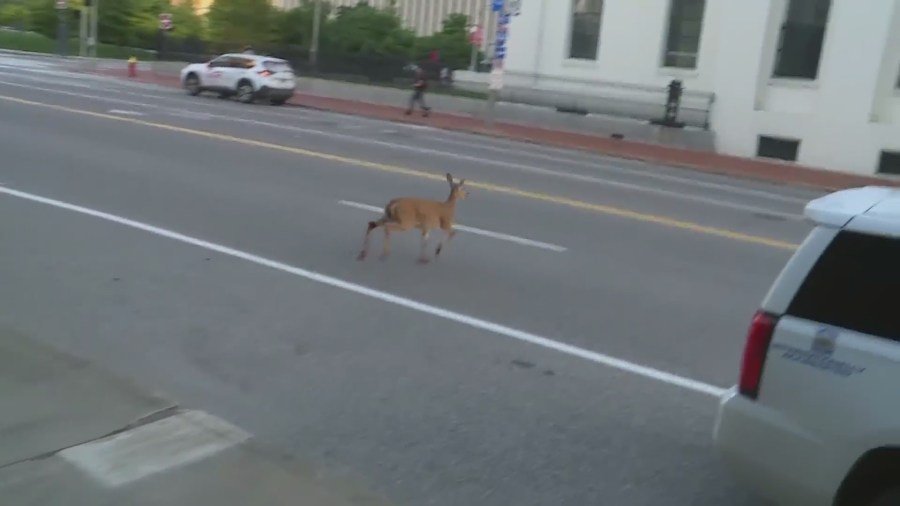 ST. LOUIS – A deer jumped through a window of UMB Bank here on Broadway and Market Street on Thursday morning. First responders attempted to escort it safely out of the building, but the deer was so frightened that it jumped out a second window to escape.

Downtown St. Louis isn’t the best place to look for wildlife, but there was a problem with a deer this morning.

“Even in the city we see deer. Forest Park is common to see deer. Some of our other big city parks too. Now, a deer like this in the inner city is uncommon but not unheard of,” said Erin Shank, urban wildlife biologist at the Missouri Department of Conservation.


As unusual as it is, this deer ended up in a bank. FOX 2 video shows the wild deer inside with officers trying to lead it back out through an open door, but things didn’t go as planned.

“Once they got the adrenaline going and I know ideally they would have loved to get that back out through the open door which was a good effort but it was so panicked at that point that unfortunately it just kind of jumped through a another plate glass window over there,” Shank said.

Shank said deer give birth to new fawns at this time of year and often chase away their yearlings or deer born the previous year.

“And that can be confusing for the young animals that go out on their own,” she said. “And we’re seeing yearlings getting into places where they don’t belong. And I think sadly we probably looked at that based on the footage I saw it appeared to be a yearling here.

The confused yearling was probably taken aback by the reflection.


“Reflections in windows can confuse all types of wildlife. And it could have seen its reflection, or the reflection of the sky and wider landscape, and been confused that this wasn’t, say, a tunnel or a continued open area,” Shank said.

After the young deer escaped, it ran toward the arch, probably back to where it came from.

“It probably followed the flow through some of our other green spaces and some of our less populated areas. And he probably went right over that green lane over the freeway and ended up being very confused as to where he was,” she said.

Blood on the window showed the yearling was injured.

“I suppose the poor thing was hurt. I don’t understand how you can go through a window that big twice and not hurt yourself. So wild animals have a tremendous ability to recover. They’re very resilient, so there’s a chance she’ll recover from her injuries and find her way back to a more suitable habitat,” Shank said. “Nature can be tough. It can be cruel. Beautiful but also cruel.”