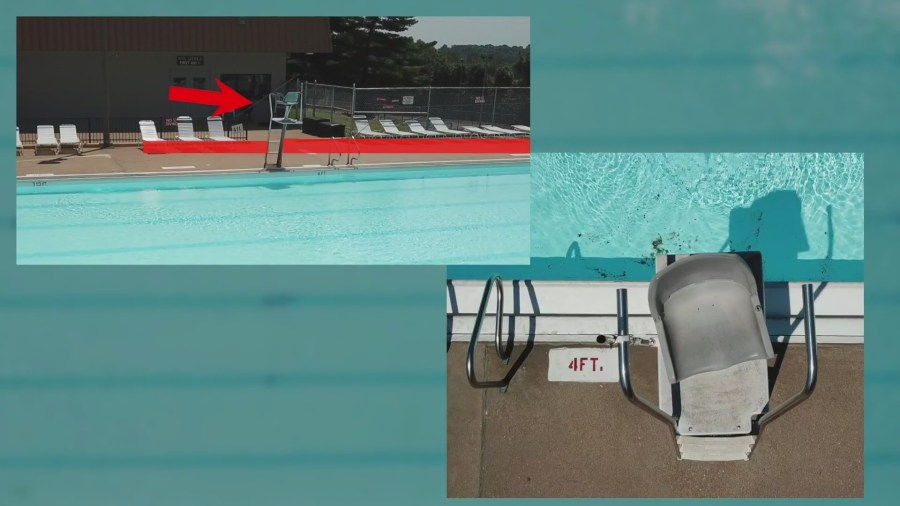 ST. LOUIS COUNTY, Mo. — No one noticed at summer camp when a 6-year-old swimmer gasped and sank to the bottom of a pool. The heartbreaking video was reviewed Thursday by FOX Files investigator Chris Hayes, who is looking for answers to prevent the next tragedy.

FOX 2 is not showing the video out of respect for the family and pain at the loss of their 6-year-old child. However, the St. Louis County Parks Department has agreed to give us a look so we can start collecting answers.

It happened on July 20th at the Kennedy Recreation Complex in southern St. Louis County. Around 1:00 p.m., about 40 children between the ages of 5 and 12 went out to swim in the Olympic-size pool


Six-year-old TJ Mister was excited to start his third day at Camp Kennedy.

“TJ enjoyed the summer camp. He wants to meet kids, he wants to play with everyone,” said Travone Mister, TJ’s father.

Video captured by a surveillance camera at the recreation center shows campers exiting and lining up at the end of the pool closest to the building. They gathered near a lifeguard post in the center of the pool where it is marked four feet. You can see a lifeguard seated in the bleachers on the opposite side of the pool.

About nine children stood alone near the shallow end while about 28 children gathered in the middle. There was TJ.

According to a lawsuit filed by TJ’s parents, “Despite the allegation that TJ could not swim and required a life jacket while in the water, the defendants never provided TJ with a life jacket or other flotation device before instructing him to use it.” to enter the pool.”


The video shows what appears to be a camp counselor with the children lined up. Then the kids jump in — almost all at once, while a supervisor stayed on the pool deck for about a minute and watched. Then this advisor went to the deep end and dived in. The time showed 1:15 p.m

Meanwhile, TJ was gasping for air. No one noticed until five minutes had passed. At around 1:19 p.m., the lifeguard is seen climbing down from his stand and sprinting to the other side on a failed rescue.

“We trusted people to take care of our child and they let us down,” said Olga Mister, TJ’s mother.

There are many more answers we are looking for, as well as many different authorities. One of those bodies looking for answers is the Child Fatality Review Board, which examined the evidence in the case on Wednesday. St. Louis County is mostly silent citing the ongoing lawsuit, but we have learned of disciplinary action taken against at least one summer camp worker who was responsible as of this July 20th. We’ll bring you more answers soon.

https://fox2now.com/news/fox-files/summer-camp-video-shows-one-lifeguard-watching-as-child-drowned/ Video from a summer camp shows a lifeguard watching a child drown

Angry neighbors moan over the couple's VERY noisy sex 'morning, noon and night' with the windows open... but opinions are completely divided