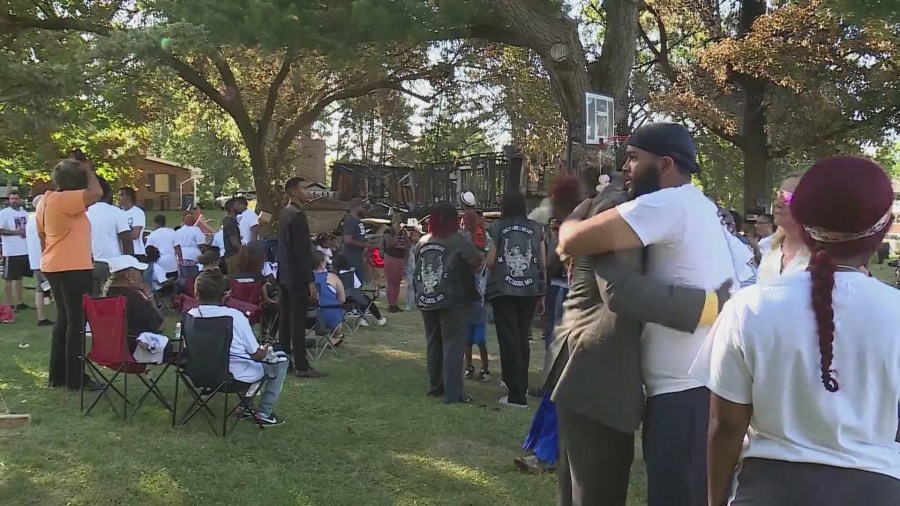 A tower of balloons, flowers and stuffed animals still stands in front of the site where 18-year-old Damario Cooks, his 16-year-old cousin Travell Eason and their friends, 21-year-old William Jones and 17-year-old Old Christopher Jones was killed.

“Not an ounce of hate in her heart,” said Diamonte, who survived Friday’s blast.

Diamonte remembered his brother and compared him to a “teddy bear”.

“You know, he’s probably one of the best people to lean on when everything’s going on because he was a good listener,” Diamonte said.

The house is near the intersection of Parker Road and North Ranch Drive. Some parishioners drove past the burned-out house to drop off donations to support the victims’ families.

Khris Rice drove a group of Eason’s friends to the vigil to show their support.

“It’s a bit dramatic for the kids in the neighborhood,” he said. “They kind of grew up with the guy, went to school with him, played basketball with him, stuff like that.”

All four victims were reminded for their joy of spending time together, trying to make music and playing basketball.


Investigators claimed the two men instructed the victims to create explosive materials from firecrackers and claimed that this led to the fire and explosion.

Relatives of the victims deny these allegations. They hoped the support shown at the vigil would help cement the memory of the victims the way they remember them.

“They had a lot of love in their hearts to share with everyone,” Diamonte said. “We just want to be here to make sure everyone remembers it.”

https://fox2now.com/news/missouri/victims-killed-in-st-louis-county-home-explosion-honored-at-vigil/ Victims killed in a St. Louis County home explosion were honored at the vigil