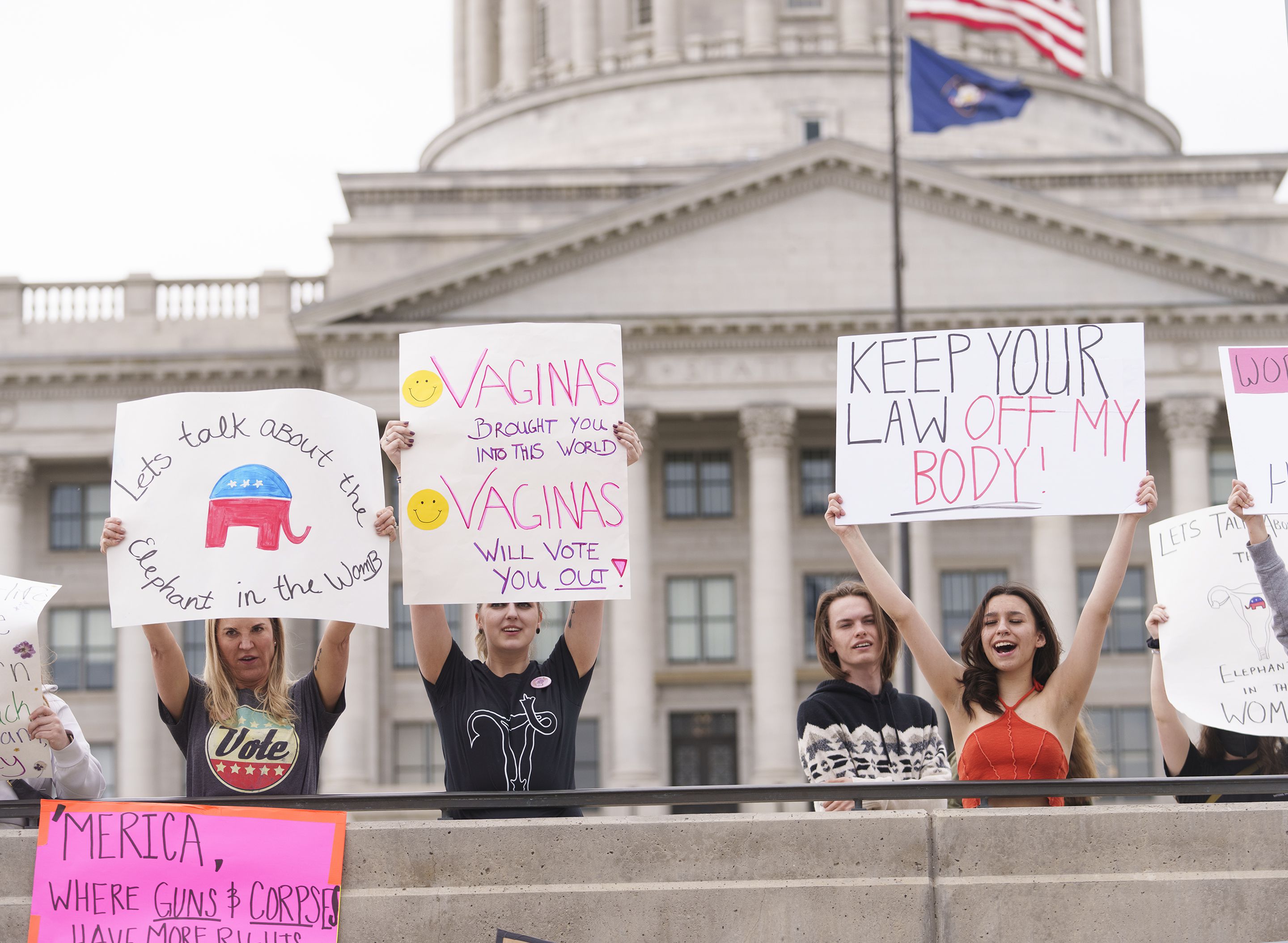 A group of about 100 people spent part of Sunday marching against the possible overturning of Roe by the US Supreme Court. v. Calf.

They were three of around 100 people who demonstrated in front of the Capitol on Mother’s Day for women’s physical autonomy. Many marched around the Capitol holding up signs and shouting chants of “Hey, hey, ho, ho, the patriarchy must go.”

Jennie Morris bought the three outfits just as she discovered that the US Supreme Court’s opinion could potentially overturn the landmark Roe v. Wade, which protects constitutional abortion rights, was leaked.

“It brought me straight back to the show and how awful it was for women,” Morris said, referring to popular television drama The Handmaid’s Tale, about fertile women who are captured by the government and forced to have children, to combat a fertility crisis. “It feels like it’s actually happening in real time. And it’s incredible.”

(Leah Hogsten | The Salt Lake Tribune) lr Paula Shepherd, Jennie Morris and Starla Holder joined about 100 people on a family-friendly “community walk” around the Utah Capitol to show their support for the “health, wellness and physical… “To demonstrate” women’s autonomy on Mother’s Day, Sunday 8 May 2022.

Morris’s two sisters, Starla Holder and Paula Shepherd, stood beside her in the same outfit and for the same reason they showed up at the Capitol – to uphold the rights of future women and girls who may one day need an abortion, including their own children .

One of the parade organizers, Juliet Reynolds of the Utah Alliance Coalition and founder of the Murray Equity Alliance, welcomed the Mother’s Day participation.

“What better tribute to showing mothers that our bodies are our control,” Reynolds said, his voice raspy from all the singing. “We are all mothers,” she said, pointing to the crowd, “we are here for our children and we are here to make their choices.”

For the three sisters, the march on Mother’s Day was of particular importance. Their children joined them in the Capitol. So did her mother, Karen Shepheard, a former Utah congresswoman. She served as a Democrat in the US House of Representatives from 1993 to 1995.

Shepheard recalls when the Supreme Court ruled in 1973 upholding abortion as a constitutional right. She had just given birth to her second child, and even though she knew she wouldn’t have any more children, she felt free and responsible for her body.

With the lifting of the threat of Roe v. However, Wade has changed that for Shepheard.

Other participants felt similar to Shepheard.

Kathy and Don Hudson came to the Capitol for their children, grandchildren, and great-grandchildren. Kathy witnessed the fight for abortion and physical autonomy. And she fears that if SCOTUS Roe v. Wade points out that this would create a domino effect and endanger other protected rights.

“That [abortion] The fight started so long ago,” she said, “and here we are again.”

“What if they try to take birth control off next? Or attack gay marriage?” she said

https://www.sltrib.com/news/2022/05/09/utahns-gather-capitol/ Utahns gather at the Capitol on Mother’s Day to support abortion rights