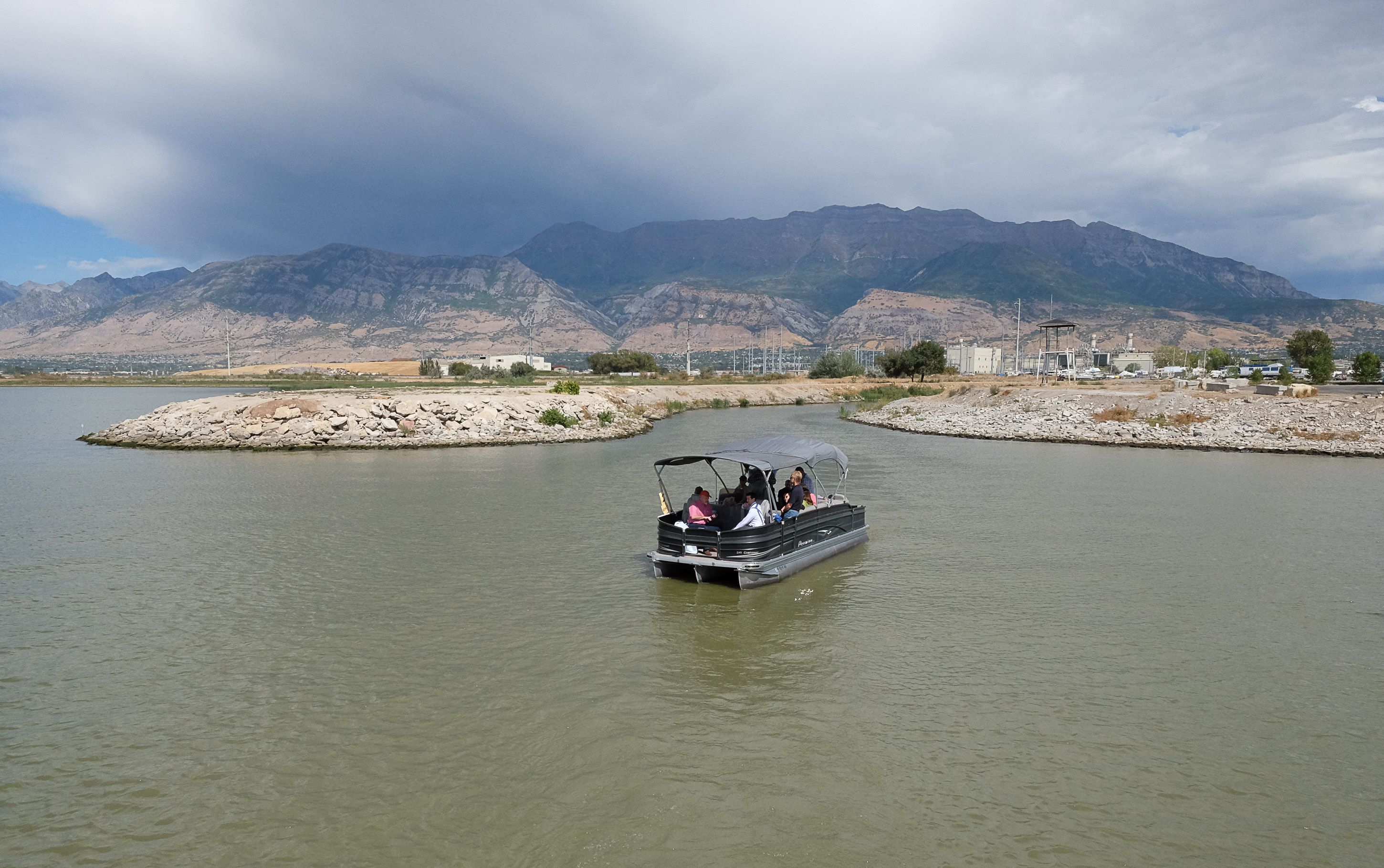 State officials opposed the proposed “restoration” because it would privatize 16,000 acres of lake bed in violation of the public trust.

(Francisco Kjolseth | The Salt Lake Tribune) Members of the Utah Legislative Water Development Commission tour Utah Lake on Wednesday, September 13, 2017. Proponents of a massive dredging project on the lake are demanding that the Utah Department of Natural Resources return their rejected land to the Exchange -Application trying to create a network of islands.

Proponents of dredging at Utah Lake are not going away without a fight.

Lake Restoration Solutions LLC last month filed papers with the Utah Department of Natural Resources asking CEO Joel Ferry to reverse an Oct. 27 decision rejecting what is known as the Utah Lake Restoration Project. The company alleges that the DNR Division of Forestry, Fire and State Lands (FFSL) misconstrued the public trust doctrine and violated state law when it deemed the proposal unworthy.

In their official response, state officials said it would be a waste of time to continue evaluating something that “apparently” violates the Utah Constitution’s prohibitions on “sovereign countries.”

“Applicant [Lake Restoration Solutions, or LRS] effectively requiring the division to authorize all land swaps, even when manifestly illegal and/or unconstitutional,” wrote FFSL Director Jamie Barnes in her Dec. 1 reply. “Even without direct legal approval or fiduciary responsibility, it would be against public policy to require law enforcement agencies to approve proposals that are manifestly illegal or unconstitutional.”

It is now up to Ferry to decide what appears to be a potential court battle.

For the past five years, the Utah company has pursued an ambitious plan to scoop nearly a billion cubic yards of nutrient-laden sediments from the bottom of Utah’s lake of the same name and shape them into a network of artificial islands that will be used for residential and commercial real estate and public recreation.

As part of the project, LRS would receive ownership of 16,000 acres of the former lake bed – land that by law must be held in public trust – to sell to developers.

A 2018 law passed by the Legislature directed DNR to evaluate LRS’s proposed land swap against 13 criteria designed to improve the lake’s ecological health, access to recreational areas, water storage, and other benefits. (A former Republican legislator from Box Elder County, Ferry was not a member of the Legislature when the law passed.)

From the start, the project has met with scathing criticism from the Utah scientific community and water managers who believe such a project would do more harm than good. LRS filed a defamation lawsuit against a leading critic. Ben Abbott, an ecology professor at Brigham Young University, is now countersuing the LRS, which is seeking to thwart the public disclosure of the evidence filed in the case.

Then that fall, the Army Corps of Engineers and the FFSL both ended their reviews of the $6 billion project, effectively scrapping the proposal.

FFSL concluded that the project would violate the public trust doctrine by privatizing land that is constitutionally obligated to remain available for public access and public uses such as hunting and fishing.

But in an unsigned petition presented to Ferry on Nov. 22, LRS executives claimed the FFSL disregarded its legal mandate under the 2018 Act and acted “arbitrarily, capriciously and unlawfully.”

The petition claims that only the Legislature or the Governor has the authority to judge the legality of the project and accuses the FFSL of attempting to create new legislation. The company argues the department’s job should be limited to promulgating standards, criteria and thresholds for assessing whether the dredging project would meet the requirements of the 2018 Act.

“Despite the lack of statutory authority, the department has posed as judge and final arbiter as to whether the [LRS] The application and project are constitutional,” the petition states.

In some places, the petition reads like a precursor to a lawsuit alleging that the FFSL’s rejection caused “substantial financial damage” to the company and sabotaged its relationships with the lenders that hired executives to finance the project.

The dredging has public confidence “because the project will enhance the public’s use and enjoyment of the property, help the public navigate Utah Lake, improve commerce, conserve the precious and scarce water resources, and the to increase fishing opportunities. “The islands will be strategically shaped and positioned to promote water flow throughout the lake and protect boats and other vehicles from high winds.”

Since the islands created by the dredged material would help the public better enjoy the remaining 70,000 acres of the lake, the surrender of that land to LRS is in line with public trust, the petition argues.

“Since the Division accepted the application in 2018, LRS has invested millions of dollars in scientific research, engineering and design to better understand Utah Lake’s problems, develop possible solutions and develop both the application and the Corps Permit Application to inform,” states the state.

Whatever information LRS’ investment produced, the Army Corps found it lacking, according to its Sept. 22 letter to LRS explaining its decision to stop environmental testing. According to the FFSL and the Army Corps, LRS was unable to demonstrate that the claimed benefits would be obtained from dredging.

https://www.sltrib.com/news/environment/2022/12/07/utah-lakes-would-be-dredgers/ Utah Lake wannabe dredgers are calling for the resumption of the controversial island project