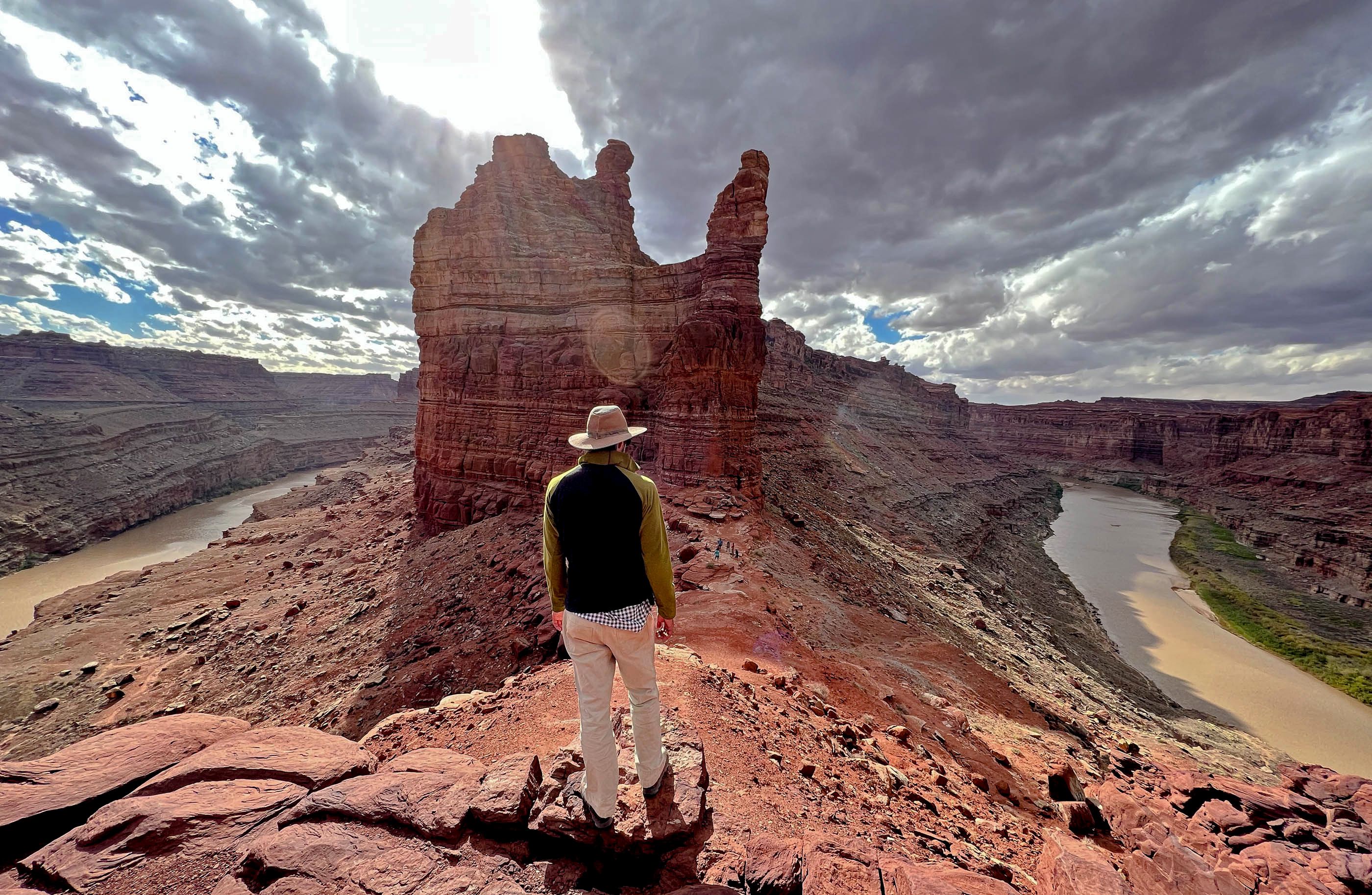 Utah has made strides in improving its wasteful water practices in recent years, but it still has a long way to go, according to a new report from a collection of water utilities, industries and conservation groups.

Low water levels have triggered ecological collapse at the Great Salt Lake. Mega-reservoirs like Lake Powell and Lake Mead have sunk to critical lows, fueling litigation between the states that rely on them. It’s spurred Utah lawmakers to pass a spate of water conservation bills, and they say they’re poised to do more in the coming days.

But a new report calls for more aggressive action.

“Utah desperately needs more investment in water efficiency and conservation,” said Ron Burke, president and CEO of the Alliance for Water Efficiency, in a press release titled, “Progress has been made in recent years, but in many ways Utah is playing catch if it should lead the pack.”

The nonprofit alliance includes public organizations such as the Salt Lake Department of Public Works and Utah State University’s Center for Water Efficiency Landscaping. This also includes companies and consulting firms. The group works to provide nationwide information on water use and advocate for better policies.

It released its latest scorecard rankings on the laws and best practices they are applying to improve water efficiency, sustainability and affordability on Wednesday.

Utah ranks 20th in the nation and fifth of the seven dry states in the Colorado River Basin, earning just 28 out of a possible 89 for its water policy.

California ranks highest on the scorecard, followed by Texas, Arizona, Washington and Georgia. The nation as a whole has made little progress, the report warns, urging states to use new federal funds to better adapt to climate change, drought and water scarcity.

“Our main goal is to reach out to states,” Burke said, “and help them find ways to be more efficient. Our goal is not to embarrass anyone.”

The Alliance had some recommendations on how Utah could specifically improve its water policy score. It called on the state to require more efficient plumbing fixtures, such as low-flow toilets. It suggested that lawmakers help utilities limit leaks in their distribution systems. It also recommended funding cities for wastewater reuse and recycling.

Utah’s rating isn’t all bad news — there are a few areas where it does comparatively well.

Legislature provides $70 million for the state’s Water Improvement Program, which provides grants and support for farmers looking to improve their irrigation practices. The country received top marks in the promotion of efficiency programs and in the categories of technical assistance.

“I know this is a problem in Utah,” Burke said. “…The state is growing rapidly, and across the country, the areas that tend to grow the fastest are those that have water supply problems.”

The Beehive State also received high marks for its tariff structure, which the report says encourages conservation. That’s because the state requires tiered systems, charging customers more money per gallon the more they use.

But the shining mark on the country’s water tariffs may surprise some. Utah is constantly criticized for its high municipal water use, which is often attributed to its low prices. The state has the largest unmetered secondary system in the country, allowing customers to use as much as they want for a flat fee included in their property taxes.

Large water districts have also come under scrutiny recently for the property taxes they use to fund infrastructure projects, while smaller utilities have to use bonds and hike rates to fund improvements. In October, Senator Daniel McCay, R-Riverton, threatened to introduce legislation that would ban such use of the property tax, but he has since withdrawn the law, and now it supports only one study on the subject.

Burke said his team was aware of the unusual way Utah supplemented water rates with property taxes and debated how they might be assessed in the report.

“We chose to go ahead and score it like we’ve done in other states,” he said, “although you could argue that maybe we shouldn’t have done it.”

Legislators last year passed a bill that would require secondary meters for most connections by 2030, which it will supplement with grants.

Increase efficiency at the tap, reduce losses in the pipes

Still, the Alliance’s scorecard report makes it clear that Utah has room for improvement, even in areas where lawmakers have recently balked.

Sen. Jani Iwamoto and Rep. Joel Ferry, both of whom have since left parliament, last year sponsored a bipartisan bill that would have called for efficient toilets, bathroom fixtures and showers in new construction, saying it could conserve enough water to To supply 30,000 households by 2030. The legislature finally revised the flow rates of bathroom fittings and showers, but not of toilets.

But as Burke pointed out, toilets tend to last a long time — decades in many cases — and shouldn’t be discounted when it comes to efficiency standards.

In a press release, the Alliance for Water Efficiency pushed beyond efficient fittings in new builds. It was recommended that all lights sold in Utah should be low flow. For example, products labeled WaterSense are approximately 20% more efficient than federal standards.

“This really is an opportunity for Utah to continue to drive water conservation,” Burke said, “with a program that’s pretty easy to implement.”

Regarding leaky lines that supply water to Utah homes, businesses and industry, Rep. Melissa Ballard, R-North Salt Lake, attempted to establish an Excessive Loss Standard in 2020 and 2022 to audit water losses in statewide systems develop and find ways to fix these leaks. Such a policy would follow the recommendations of the alliance and even had the support of the Weber Basin Water Conservancy District. But Ballard’s bill didn’t pass the House last year.

A typical water utility in the US loses 10% or more through its distribution lines, Burke said.

“This is water that’s already being treated, it’s being pumped…sanitized, pumped again,” he said, “then it’s lost in the ground. That’s the way it is [also] waste of money.”

Salt Lake City Public Utilities Director Laura Briefer said the city loses about 10% of its water before it’s delivered to customers, although some of that is due to firefighting and pipe flushing. She was unable to review the Alliance’s scorecard report before it was released and could only speak generally about its findings, but said government support for more efficient fixtures and leak monitoring would be beneficial in managing the water supply .

The Alliance’s third recommended priority area — wastewater reuse and recycling — could benefit the Colorado River Basin, but also siphon more water that would otherwise end up in the Great Salt Lake.

Large sewage treatment plants along the Wasatch Front discharge their treated water into the Jordan River, a tributary of the Great Salt Lake, or into canals that flow to the lake’s inlets. However, sewer operators are under increasing pressure to costly upgrade their facilities to treat the water to higher standards.

Lake advocates worry that with the region’s rapid growth, it may be attractive for water managers to capture this higher-quality water and put it to consumptive use, which will also help fund infrastructure improvements.

Burke acknowledged that Utah is a unique case and water reuse may not make sense everywhere. In the Colorado River Basin, however, climate change is creating bottlenecks. It has cities like Los Angeles and Las Vegas keeping tabs on sewage to support their growing populations.

He also noted that despite increased water conservation efforts by some states in the basin, the Colorado River and its reservoirs have continued to dry up. All states that rely on it must grapple with a future where there is simply less.

For that reason, it’s important to look at water supply from the perspective of a watershed rather than just a local supplier’s perspective, Burke said.

“That’s a role that states can play,” he noted. “…Due to climate change and desiccation, there is limited water for circulation. And it will be less predictable.”

https://www.sltrib.com/news/environment/2023/01/18/utah-water-policy-playing-catch/ Utah falls to 20th in the nation because of its water conservation policies

Streaming giants will be forced to produce more Australian content