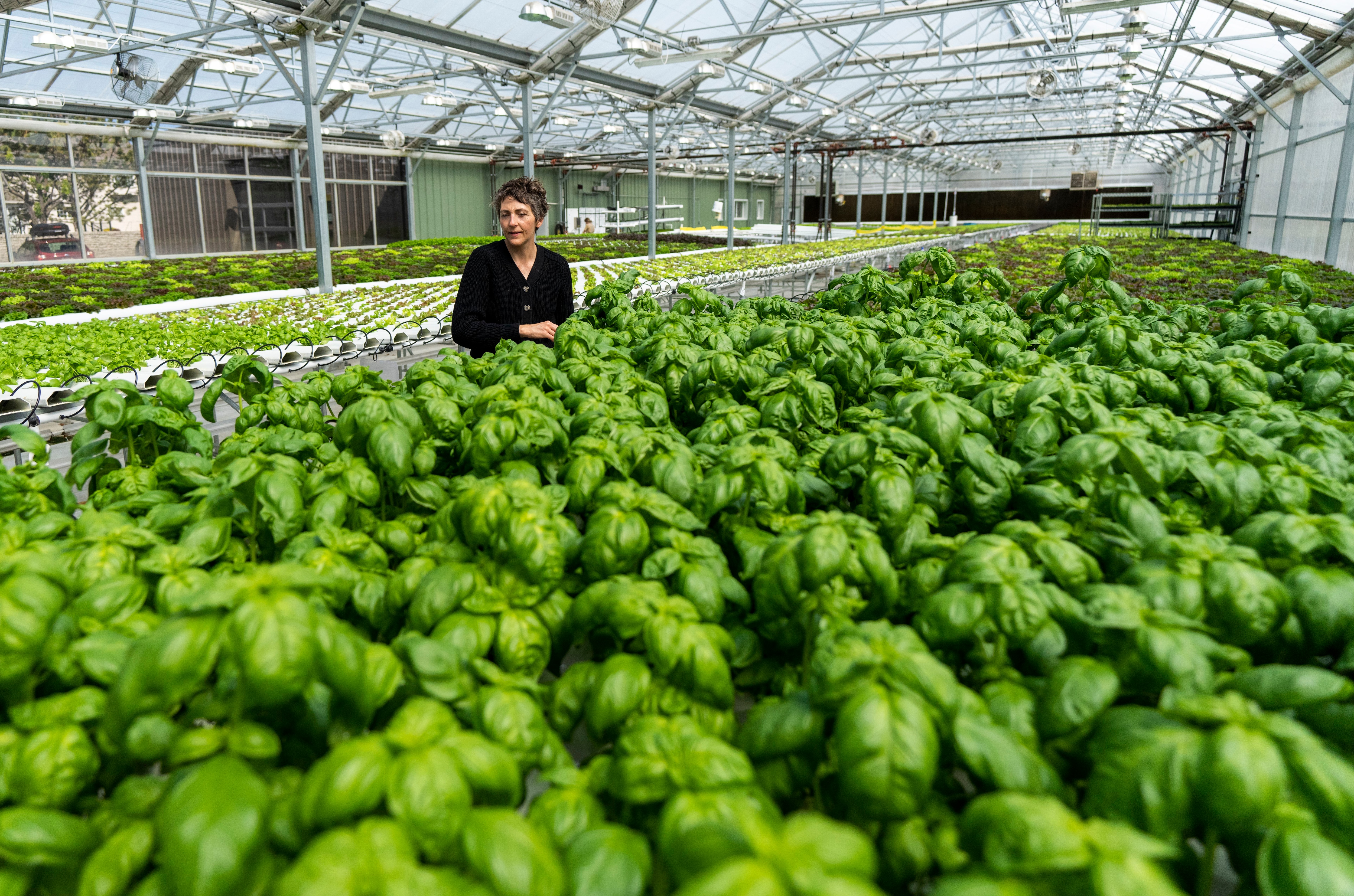 When the owners of R&A Hydroponics first started cleaning their greenhouse, Ron Murphy thought it would alert local authorities.

“I swear I thought the cops were coming,” he chuckled. “When we opened the door, it just smelled like marijuana.”

Ron, 59, and Anita Murphy, 58, bought their full-blown hydroponic farm in the West Bank from a licensed cannabis grower. The 4,200-square-foot greenhouse prompted them to jump at the opportunity in March last year.

“The greenhouse is the dream,” said Anita Murphy, “it’s the house that’s a nightmare,” pointing to her home that was a century old.

To save on water and electricity bills, the Murphys decided to replace their lawn at their old Sandy home with a small vertical farm. They grew cherry tomatoes, various herbs and peppers. A taste for sustainable farming made her look for new land to turn her hobby into an income.

For Anita, her small farm provided the opportunity to feed the community.

(Francisco Kjolseth | The Salt Lake Tribune) Various greens from R&A Hydroponics in West Jordan are on view as the Downtown Farmers Market holds a press event at Pioneer Park on Tuesday, May 31, 2022 to announce the start of its 31st season Saturday.

In her greenhouse lay rows of greens like sage, lettuce, kale, and catnip. They have grown a variety of produce since owning the farm. At the moment they are growing marigolds (the flowers are not only beautiful but delicious) to add to the salad mixes they sell at the local farmers’ markets.

They’re still trying to be inexpensive. Someone asked to grow watercress. So they did. It grew really well just by putting it in water. But it wasn’t her bestseller.

However, it is worth experimenting with their hydroponic farm. It takes you about six to eight weeks to fully harvest most of the food in the hydroponic greenhouse year-round. The process is faster and uses about 70% less water than a traditional soil farm.

“It takes less to water the farm than our lawn,” said Ron.

Hydroponics involves growing produce in nutrient enriched water. The water is the ground, effectively. Growing vegetables in water doesn’t seem like a great way to conserve H2O, but hydroponic farms can use 80% to 90% less water than traditional farming. That’s because hydroponics continually recycles unused water, making the most of every drop.

(Rick Egan | The Salt Lake Tribune) Lettuce growing in a hydroponic greenhouse at Snuck Farm in Pleasant Grove on Wednesday, May 11, 2022.

Surrounded by sprawling suburbs in Pleasant Grove you’ll find another hydroponic operation, Snuck Farm. Snuck is one of the larger hydroponic operations, reducing water use by 90%. Their water recycling is so efficient that they grow 500 to 700 pounds of lettuce every week and only change the water every four or five months. Even what is left is not wasted.

“Any remaining water is flushed out to grow forage for our alpacas,” said Rachel Chamberlain, Chief Greenhouse Officer at Snuck Farm.

Snuck isn’t just about greens and alpacas, it’s also a legacy for owners Page Westover. “This land has been farmed by my family since the 1800s,” Westover said. Named after her grandfather, Boyd “Snuck” Fugal, the hydroponic farm carries on the family legacy while looking to the future of nutrition.

(Rick Egan | The Salt Lake Tribune) Lettuce growing in a hydroponic greenhouse at Snuck Farm in Pleasant Grove on Wednesday, May 11, 2022.

That’s the other secret to the success of hydroponics, the ability to grow 300% to 1,000% more than crops in the same space.

While some Utah companies are conducting bold experiments in large-scale sustainable agriculture, hydroponics may hold the key to year-round food production on relatively small lots right in the middle of Utah’s urban core.

Snuck Farm operates as a Community Supported Agriculture (CSA), with nearby customers buying shares and receiving weekly shipments of vegetables. As well as building a community, locally delivered groceries mean significantly fewer greenhouse gas emissions than most grocery stores, which have likely traveled thousands of miles before ending up in your local supermarket.

Could commercial farms make the transition?

Joe Swartz, Vice President of AmHydro, a national hydroponic technology company, is living proof. As a fourth-generation farmer in western Massachusetts, he is no stranger to farm life.

“My father had multiple farm injuries,” Swartz said. “My uncle, who sprayed all the pesticides on the farm, died prematurely from a pesticide-related illness.”

He didn’t want to give up the family’s 30-acre inheritance. So Swartz began looking for ways he could grow safely and sustainably. He discovered hydroponics and changed the family farm in 1984. He has reaped the rewards ever since.

However, Swartz says hydroponics is primarily focused on harvesting leafy greens, tomatoes and other produce for smaller, localized farms. When it comes to large farms with intensive farming, this is not always cost effective.

While it’s entirely feasible, Swartz says that growing alfalfa hydroponically, for example, amounts to “the economics of space.”

Most ground crops, such as alfalfa, soybeans, and corn, require large amounts of arable land to produce enough profitable supply. Swartz says a 10,000-acre corn farm would have to spend billions of dollars to cover the property in greenhouses.

“To build a highly controlled environment and facility,” he said, “would cost anywhere from $1.5 million to $3 million an acre.”

(Rick Egan | The Salt Lake Tribune) Ron Murphy runs a hydroponic farm in the West Bank with his wife Anita on Monday, June 6, 2022.

Additionally, R&A Hydroponics’ Ron Murphy acknowledges that building a hydroponic farm from scratch is expensive. And with constant material and supply chain challenges, building something like a greenhouse is even harder.

“It’s almost unaffordable now because of the steel tip,” said Ron. “Look at how much steel is in here,” he said, pointing to the steel supporting the structure.

Swartz hopes that hydroponic technology will evolve to where it’s economically viable for large scale growers to make the switch. And with the growing popularity of hydroponics, the possibility may not be too far away.

“Growers are being challenged by increasing pressures from water costs and water availability. Both farmers and consumers are much more concerned and aware of the environmental impact of farming,” Swartz said. All of these factors are driving this industry forward.”

(Rick Egan | The Salt Lake Tribune) Page Westover inspects the basil in a hydroponic greenhouse at Snuck Farm in Pleasant Grove on Wednesday, May 11, 2022.

Queensland leads truth-finding and healing investigations on road to treaty