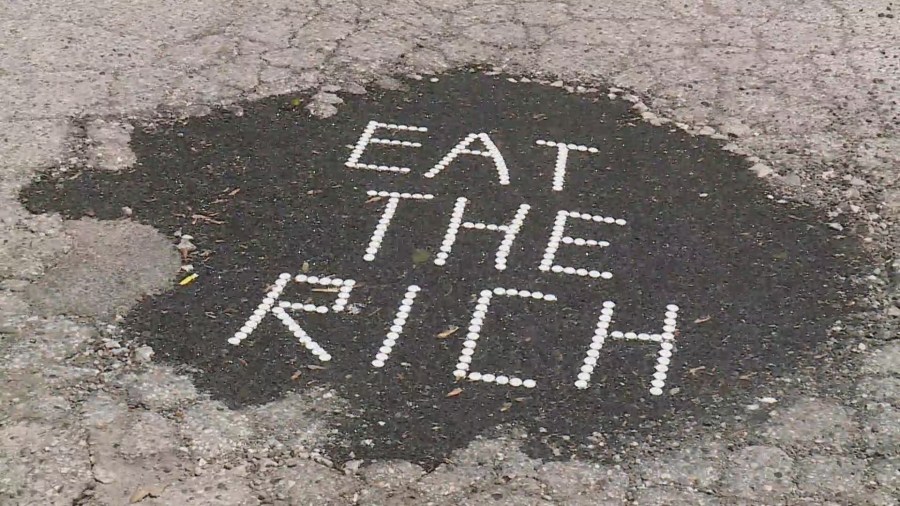 ST. LOUIS – People are so frustrated with potholes on the roads in the St. Louis area that they have started filling in the potholes themselves.

Thousands of potholes remain in the area, but you can now check the monster pothole on Rosebury Avenue off the list.

Local residents said someone who lives in the area west of Forest Park got tired of waiting for the St. Louis City Highway Authority and patched it up himself over Mother’s Day weekend. Hardware stores now sell asphalt paving products by the bag.

The patch job included small tiles that read “Eat The Rich” tapped into the asphalt. Nobody seemed sure why. A man who did not want to be interviewed painted over the message Monday.


Chris Kuse, a local resident, was glad that after almost a year someone had filled in the pothole. With street parking there was no way to hit it.

There’s even a candidate for the US Senate from St. Louis running on a platform with one primary goal: to fill every pothole in America.

“When I get to Washington DC, I plan to introduce my ‘Pot for Potholes’ legislation,” candidate CW Gardner said in a social media campaign video.

Gardner launched his Republican primary campaign as a satirical “slap” at the other candidates on the ballot.

When asked how much of the campaign was real, Gardner laughed and replied, “That’s a good question. I can’t answer that. I want to do something called the ‘Missourah Project’ that’s focused on removing potholes.”

Tax revenues from federally legalized marijuana sales would fund the program, he said. People hate potholes so much that they start taking it seriously.

“It happens more and more often, especially with my friends. You start saying, ‘Your ideas are good.’ I say, ‘I know they’re good. I can not help it.’ I sometimes don’t know what to do. I don’t know where we’re going with this. I’m just riding the mood,” Gardner said.


The City of St. Louis Streets Department has enough money for potholes, but not enough dry days or workers to fill the nearly 1,900 known unfilled potholes just on the city limits.

“(There are) significant staffing issues,” said the department’s director, Kent Flake. “We currently have a staff shortage of just over 40%. That’s the biggest thing. We gotta get guys in the door. We should start today with two boys.

Workers learn trades while being paid, he said. The city even offers application assistance. Flake said with a hot, dry forecast and projected six-day workweeks, more than half of those potholes should be filled within two weeks.

There is no need to do it yourself. Flake strongly advises against it.

https://fox2now.com/news/missouri/tired-of-waiting-mystery-person-fills-pothole-on-st-louis-street/ Tired of the wait, the mystery person fills a pothole in the St. Louis road