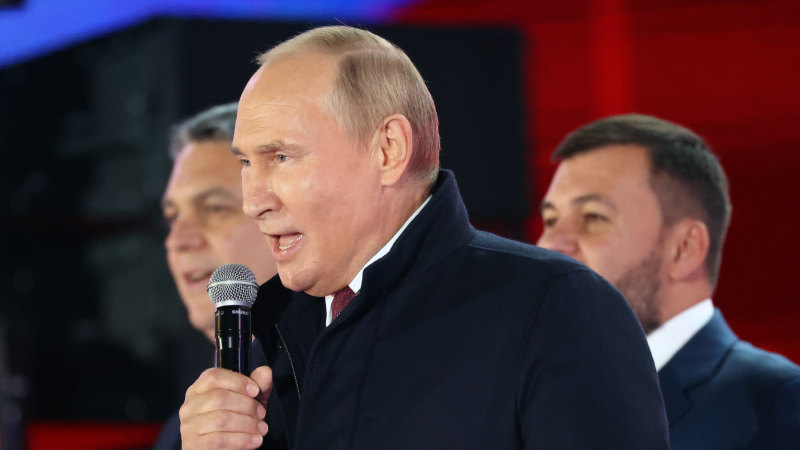 Russian dictator Vladimir Putin presented his annexation of Ukrainian territory last week as a victory for his values. In fact, it was a farce based on a lie that demonstrates not his strength but his weakness.

The annexations are a dramatic retreat from the grand plans that launched Putin’s full-scale invasion seven months ago.

In February, Putin said his goal was not to take over Ukrainian territory but to overthrow the entire government of President Volodymyr Zelenskyy.

Since 2014, Putin had engulfed Ukraine’s Crimea region and set up puppet states in the Lugansk and Donetsk regions, and if all had gone according to plan he would have turned all of Ukraine into a vassal state.

But thanks to the bravery of the Ukrainian people and the timely shipments of arms from the US and its allies, including Australia, this crazy expedition failed. Not only has the democratic regime survived, but Putin’s army has suffered heavy casualties and was routed over the past month. The front line was pushed back 100 kilometers east of Kharkiv, Ukraine’s second-largest city, and on Saturday the country’s troops recaptured the strategic Donetsk region city of Lyman, taking with it many Russian prisoners.

Two weeks ago, Putin conceded that in order to recoup his losses and stabilize the front line, he would need to call up at least 300,000 conscripts, something he had specifically promised he would not do at the start of the war.

Tens of thousands of men unwilling to fight in this absurd war have fled across the border to avoid conscription, and anti-war protests are breaking out across Russia, shaking Putin’s hold on power.

For this reason, Putin has staged the farce of annexing Donetsk and Lugansk, as well as two other Ukrainian regions, Kherson and Zaporizhia, in which he owns some territories.

He believes this play will rally his faltering troops and help him on the home front. At a rally in the Kremlin to inaugurate the annexation, he claimed he was fulfilling a patriotic mission and said Russians should “stand together.”

https://www.smh.com.au/national/nsw/west-must-ignore-russian-lies-and-stick-solid-with-ukraine-20221002-p5bmjs.html?ref=rss&utm_medium=rss&utm_source=rss_national The West must ignore the Russian lies and hold tight to Ukraine

London Marathon 2022: when was the first race?