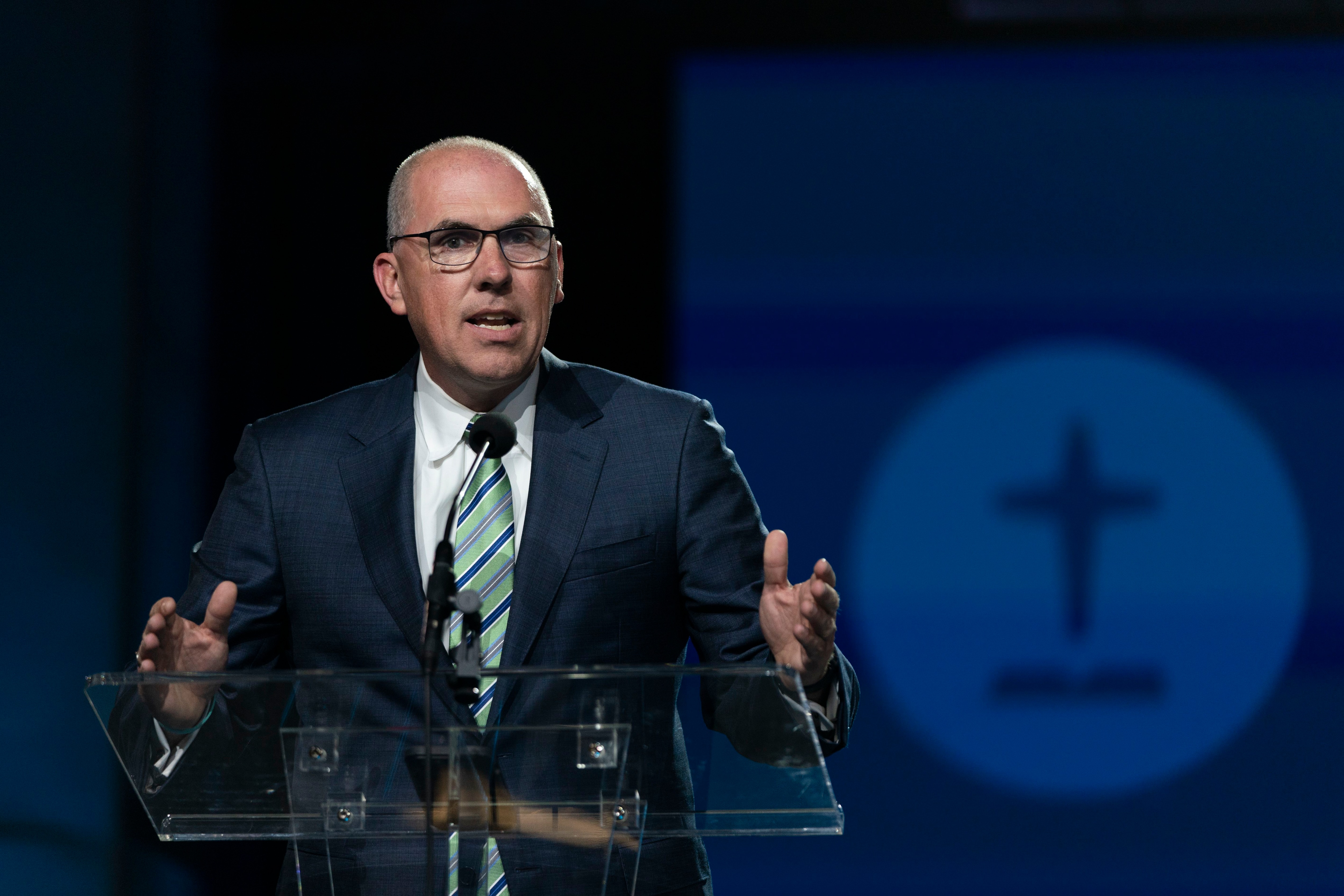 Anaheim, California • Bart Barber, longtime pastor of a small Texas church and frequent leader of prominent Southern Baptist committees, has been elected the next president of the country’s largest Protestant denomination.

Barber, 52, received 61% of the vote in the second round of voting Tuesday night at the annual Southern Baptist Convention, defeating Florida pastor Tom Ascol in a runoff.

The pastor of the First Baptist Church of Farmersville received a majority of the vote in an earlier election Tuesday afternoon, but without a clear majority winner, the contest went into a runoff. Tuesday’s vote eliminated missions expert Robin Hadaway, who received 5% of the vote, and Frank Cox, a Georgia pastor nominated in the closing hours of the race, who received 13%. Ascol, a vocal critic of what he believes to be a liberal tendency in the SBC, received 34% in the first election while Barber won 48%.

Barber succeeds Alabama Pastor Ed Litton, who decided against a traditional one-year second term. Litton, who apologized earlier in his presidency for plagiarizing parts of several sermons by former SBC President JD Greear, said he plans to broaden his focus to include racial reconciliation.

The election was one of the most closely watched aspects of the two-day meeting, where messengers or delegates have also addressed proposed recommendations after an independent investigation found decades of mishandling allegations of sex abuse by SBC executive committee leaders.

Barber said there must be a shift in the decentralized structure of the autonomous Southern Baptist Churches as their members and leaders respond to calls for more training and vigilance regarding sexual abuse.

“[Our]decentralized polity can become, instead of a hunting ground where predators brutalize their prey, a place where sex offenders are made aware that the tables have turned and the hunter is now the hunted,” he said in the statement. “It’s time Southern Baptists realized how nimble and resilient our Baptist state can be to make sex offenders aware that Southern Baptist Churches are a dangerous place for them.”

In a Sunday sermon at nearby Huntington Beach Church, Barber said that 60% of the women in couples he’s met for premarital counseling in recent years reported having previously experienced sexual abuse.

“It’s not just an isolated issue, or just the clergy, or just the churches, or just a few churches in the Southern Baptist Convention,” he said. “The fact is, statisticians tell us if it was at home, if it was at school, if it was at the doctor’s, if it was an exercise program, that up to 1 in 4 of the women who are in this room will eventually.” experience sexual abuse in their lives.”

Staff from Barber’s own community intervened and contacted authorities over concerns a now-removed member might be caring for juvenile members. The man later admitted molesting the teenagers when they worked for him and he was serving a prison sentence after pleading guilty to child indecency and sexual assault.

Barber told the Religion News Service that he later heard from a Dallas man who told Barber he had previously been molested in another state by the same abuser “in connection with a Christian ministry.” The ministry was aware of the abuse, but no charges were filed.

“This experience cemented in me what was previously a set of best practices that we used as a defense against a theoretical threat (someone might try to abuse someone here in Farmersville one day),” he told RNS in an email -News. “We now know firsthand the harm humans can do when predators go unreported, prosecuted and registered as perpetrators.”

Ahead of the annual meeting, Barber said he agreed with the Sexual Abuse Task Force’s proposal to hire a national staffer who would take reports of abuse allegations and determine which church or other SBC entity should respond.

“The idea that we’d look and say, ‘We need someone who really understands the perspective of sexual abuse survivors,’ seems like something consistent with actions we’ve taken in the past,” he said.

Barber has held numerous leadership positions in the denomination, including first vice president of the SBC. He was also a trustee of Southwestern Baptist Theological Seminary when it ousted Paige Patterson as president after reports surfaced of Patterson’s mishandling of rape allegations at a previous job.

Patterson was initially fired and received a salary and lodging as President Emeritus. Barber and other board members stripped him of that title — a move Barber defended at this year’s SBC annual convention.

Barber was a member of the 2021 SBC Resolutions Committee and chairs this year’s committee, which has received 29 proposed opinions to review, edit or amend for ambassadors to consider. Although resolutions are non-binding statements of the views of the messengers at a particular convention, they have been the source of heated discussions on issues such as abortion and critical racial theory.

With more than 14,000 followers on Twitter, Barber has used the social media platform to share some of his views, retweet those who supported his campaign and share stories about working on his undeserving ranch, with Santa Gertrudis cattle in the background of the videos he posted.

Barber said he doesn’t intend to travel and speak as much as some former SBC presidents — often leaders of much larger congregations — have done during their time in that role.

“Maybe someone will come after Bart Barber and say, ‘It’s doable: you can be a pastor of a church that’s not huge and still do the job,'” he responded to a question at the press conference. “I just want to expand on it and give an example of how a deep level of leadership in the SBC can be part of this process.”

He also tweeted about a recent visit to his ailing mother.

At Huntington Beach Church, he explained that he had good reason to dress less casually than the sandal-and-trainer crowd at church a few miles from the Pacific.

“I know I probably broke the California Penal Code by wearing a tie to a meeting like this, but they tell us that my mother has Alzheimer’s disease in the last few weeks of her life and she loves her tie-wearing preacher boy and blue is her favorite color,” he said. “And sometimes when I show up dressed like that, she knows who I am. And that’s why I’m wearing this today in her honor.”

Bob Smietana of the Religion News Service contributed to this report.

https://www.sltrib.com/religion/2022/06/15/texas-pastor-elected/ The Texas pastor was elected president of the country’s largest Protestant denomination after investigations into sexual abuse

People love that Mahershala Ali is on his personal assistant's TikTok