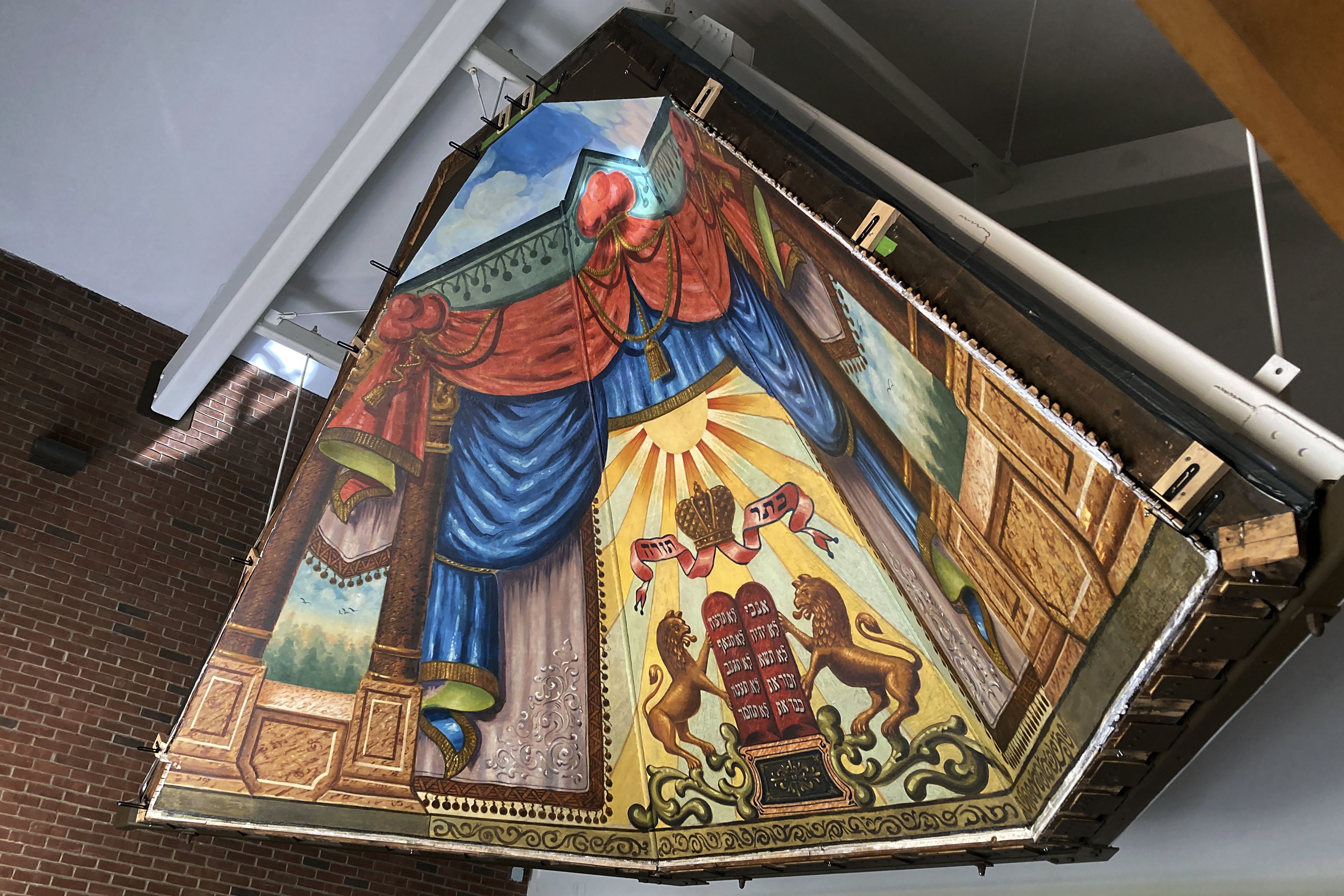 BURLINGTON, Vt. – A mural painted more than 100 years ago by a Lithuanian immigrant in a Vermont synagogue and hidden behind a wall for years is considered a rare work of art and has been carefully moved and restored.

Painted in 1910 by sign painter Ben Zion Black, the large colorful triptych depicts the Ten Commandments with a lion on either side, the sun shining down, and columns and lavish drapes around the edges. Experts say it is now known as the “Lost Mural” and is a rare representation of the type of art that adorned wooden synagogues in Europe, most of which were destroyed during the Holocaust.

“When I learned about the mural and its history and the story behind the artist, I was completely amazed, and there’s nothing like it anywhere else in this country,” said Josh Perelman, chief curator and director of exhibitions and interpretations at the Weitzman National Museum for American -Jewish History in Philadelphia.

It’s a representation of a style that was present across Europe, but Perelman said he’s never heard of anyone bringing that style to the United States.

“That makes it both a treasure and a significant work, both in American-Jewish religious life and in the art world of this country,” he said.

Black, who was also a musician, playwright, and poet, and a sign maker, decorated the interior of what was then the Chai Adam Synagogue in a Jewish neighborhood in Burlington known as Little Jerusalem in 1910. He painted the triptych – the lost mural – in the apse of the building, as well as other murals inside the synagogue.

But the synagogue was closed in 1939 when it merged with another, Ohavi Zedek, and the original building was used for other purposes, including a carpet shop, according to The Lost Mural Website.

When the building was converted into apartments in 1986, Ohavi Zedek archivist Aaron Goldberg and a synagogue colleague tricked the owner into installing a wall in front of the mural, according to the website. Black’s two daughters donated money to have archival photos taken of the art, but it was unclear at the time if the mural could be saved, Goldberg said.

More than 20 years later, the plaque was cut away, and photos were taken and sent to museums across the country and around the world to ask what should be done with the artwork, Goldberg said.

“The general consensus at the time was that we had to do everything and take all possible action to remove the original mural because of its uniqueness, because it really is symbolic of maybe thousands of murals and this type of painting that have been lost in Eastern Europe and Western Europe,” Goldberg said.

The plaster was in bad shape and the paint was peeling off in many places. The plaster was stabilized and a restorer worked to put the paint back on. A temporary structure was then built to allow the building’s roof to be removed, the mural’s lathes to be strengthened, and the artwork to be enclosed in a metal frame for the move in 2015 by crane and then truck to the current Ohavi Zedek Synagogue.

In its new home, conservators restored damaged sections of paint and cleaned the entire mural, revealing its original vibrant color and detail. Color was also adjusted and added where it had fallen off. That work took place this year and last year during the coronavirus pandemic when the building was largely unused.

Approximately $1 million was raised for the project through donations from local, state, national and international donors. The Lost Mural Project, an independent secular nonprofit, is still seeking donations to recreate the green corridors on the lost original painting, said Goldberg, its president.

The renewed mural was unveiled this summer and tours are ongoing.

Chief Rabbi Amy Small saw the beauty of the restoration step by step as she entered the office or shrine, reminding her of the mural’s significance.

It is significant not only for the Jewish community and the descendants of those early Burlington settlers, but also for other immigrants in the United States who have provided safety to Jewish and other families who fled many parts of the world, she said .

“It’s both a Jewish story and an American story,” Small said, as well as a “universal story.”

Another part of the lost mural’s story is the “amazing, creative, and dedicated people who worked to preserve it and re-present it to the world,” Perelman said. “The community of Burlington, the Burlington Jewish community and the state of Vermont have been amazing in their sense of the importance of this work of art and their commitment to making it visible again.”

https://www.local10.com/entertainment/2022/08/16/long-hidden-synagogue-mural-gets-rehabbed-relocated/ The synagogue’s long-hidden mural is being rehabilitated and relocated