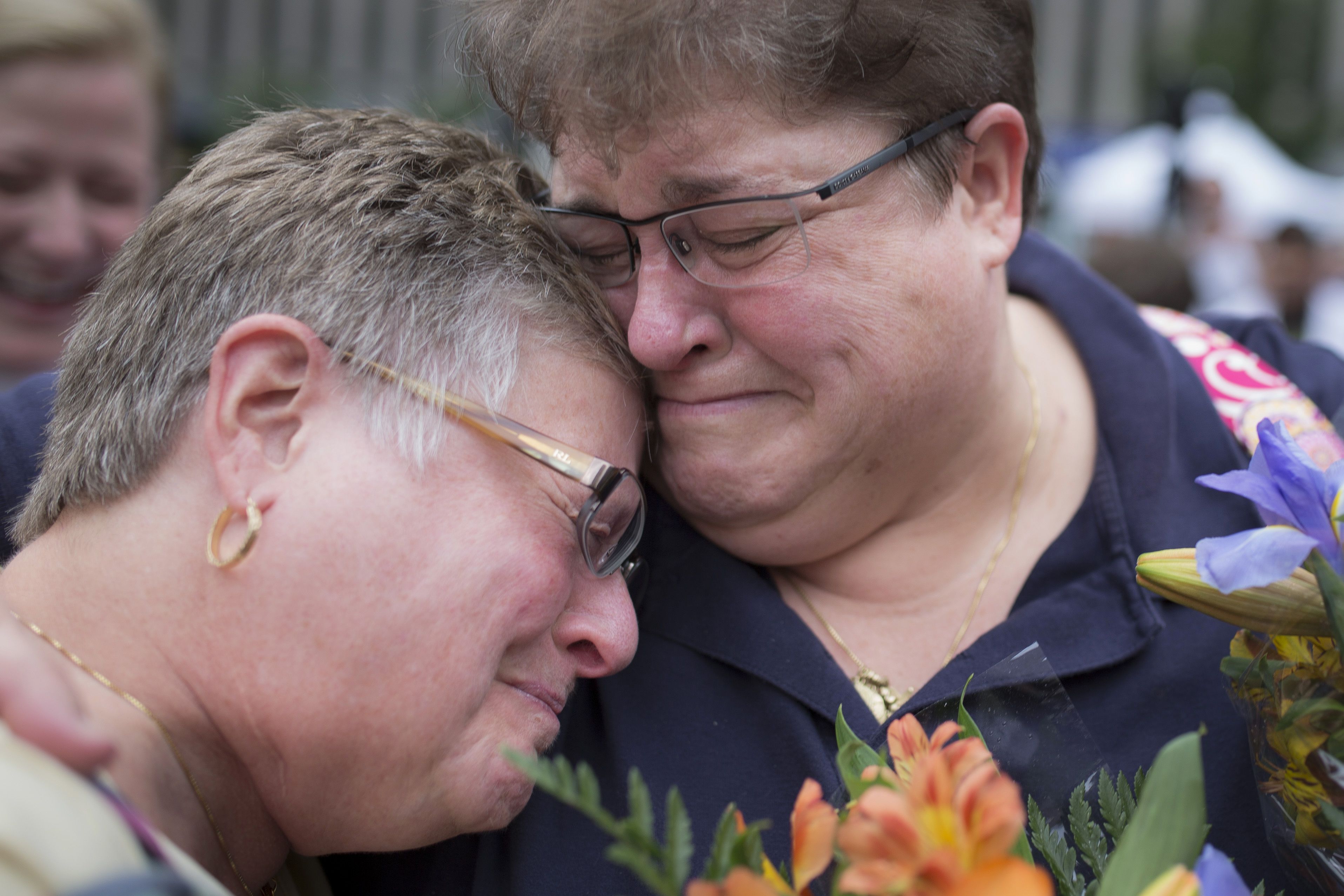 WASHINGTON – Editor’s Note: On June 26, 2015, the US Supreme Court ruled that same-sex couples have the right to marry. The narrow 5-4 decision lifted the ban on same-sex marriage in 14 states.

With the passage of the Respect for Marriage Act, which protects same-sex and interracial marriages, The Associated Press republishes reporter Mark Sherman’s 2015 report on the Supreme Court’s same-sex ruling.

Same-sex couples won the right to marry nationwide on Friday as a divided Supreme Court handed the gay rights movement a crowning victory, sparking a jubilant cascade of long-delayed nuptials in states that banned them.

“This freedom can no longer be denied,” said Justice Anthony Kennedy.

The vote was close – 5-4 – but Kennedy’s majority opinion was clear and unequivocal: “The court now rules that same-sex couples can exercise the fundamental right to marriage.”

The ruling will put an end to bans on same-sex marriages in the 14 states that still uphold them, and provide an exclamation point for the breathtaking changes in the nation’s social norms in recent years. As recently as October, just over a third of states allowed same-sex marriages.

Kennedy’s reading of the verdict prompted tears in the courtroom, euphoria outside, and the immediate issuance of marriage certificates to same-sex couples in at least eight states. In Dallas, Kenneth Denson said he and Gabriel Mendez were legally married in California in 2013, but “we’re Texans; we want to get married in Texas.”

President Barack Obama hailed the decision, calling it “justice that comes like a thunderbolt.”

Four of the judges of the court did not cheer. The dissenters accused their peers of usurping power that belongs to states and voters and short-cutting a national debate on same-sex marriage.

“This court is not a legislator. Whether same-sex marriage is a good idea shouldn’t concern us,” Chief Justice John Roberts wrote in dissenting opinion. Roberts read a summary of his appeal from the bench for the first time in almost 10 years as chief justice.

“If you’re among the many Americans, regardless of sexual orientation, who are in favor of expanding same-sex marriage, by all means celebrate today’s decision,” Roberts said. “But don’t celebrate the Constitution. It had nothing to do with that.”

Justice Antonin Scalia said he was less concerned about same-sex marriage than “the threat to American democracy posed by this court.” He described the decision as a “judicial coup”. Justices Samuel Alito and Clarence Thomas also disagreed.

The US Conference of Catholic Bishops said it was “deeply immoral and unjust for the government to declare that two persons of the same sex can marry”.

Kennedy said nothing in the court decision would compel religions to condone, let alone perform, marriages to which they object. And he said couples seeking the right to marry shouldn’t have to wait for political branches of government to act.

The 14th amendment requires states to allow same-sex couples to marry on the same basis as heterosexuals, he said

“The dynamic of our constitutional system is that individuals do not have to wait for legislative action before asserting a fundamental right. The nation’s courts are open to injured persons who come to them to justify their own

direct, personal stake in our basic charter,” Kennedy wrote in his fourth major statement in support of gay rights since 1996. It came on the anniversary of two of those earlier decisions.

The stories of people asking for the right to marry “show that what they seek is not to denigrate marriage, but to live their lives or honor the memory of their spouses, bound by their bond,” Kennedy said.

As he read his opinion, onlookers in the courtroom wiped away tears as the implications of the decision became clear. One of those listening was James Obergefell, the lead plaintiff in the Supreme Court dispute.

Outside, Obergefell held up a photo of his late spouse, John Arthur, and said the verdict established that “our love is the same”. He added, “This is for you, John.”

Obama made a congratulatory call in Obergefell, which he took amid a crowd of reporters outside the courthouse.

Minutes later in the White House, Obama hailed the decision as affirming the principle that “all Americans are created equal.”

The crowd outside the courthouse on Capitol Hill grew in the minutes after the verdict. The Gay Men’s Chorus from Washington, DC sang the “Star-Spangled Banner”. Motorists honked their horns in support as they drove past the crowd, which included some same-sex spouses.

The verdict will not take effect immediately as the court gives the losing side about three weeks to request a reconsideration. But county officials in Alabama, Georgia, Mississippi, Ohio, North Dakota, South Dakota, Tennessee and Texas began issuing licenses to same-sex couples within hours of the decision.

The cases before the court concerned laws from Kentucky, Michigan, Ohio and Tennessee that define marriage as the union of a man and a woman. These states have not allowed same-sex couples to marry within their borders, and they have also refused to recognize valid marriages from other countries.

The earlier decision in United States v. Windsor did not address the validity of state bans on marriage, but courts across the country said, with few exceptions, that their logic compelled them to invalidate state laws affecting gay and lesbian couples Marriage prohibited.

According to UCLA’s Williams, there are an estimated 390,000 married same-sex couples in the United States

Institute that tracks the demographics of gay and lesbian Americans. Another 70,000 couples living in states that don’t currently allow them to marry would marry in the next three years, the institute says. About a million same-sex couples, married and unmarried, live together in the United States, the institute says.

The Obama administration supported the right to marry for same-sex couples. The Justice Department’s 2011 decision to stop defending the federal anti-marriage statute was a major moment for gay rights, and Obama declared his support for same-sex marriage in 2012.

When was the last white Christmas in London?