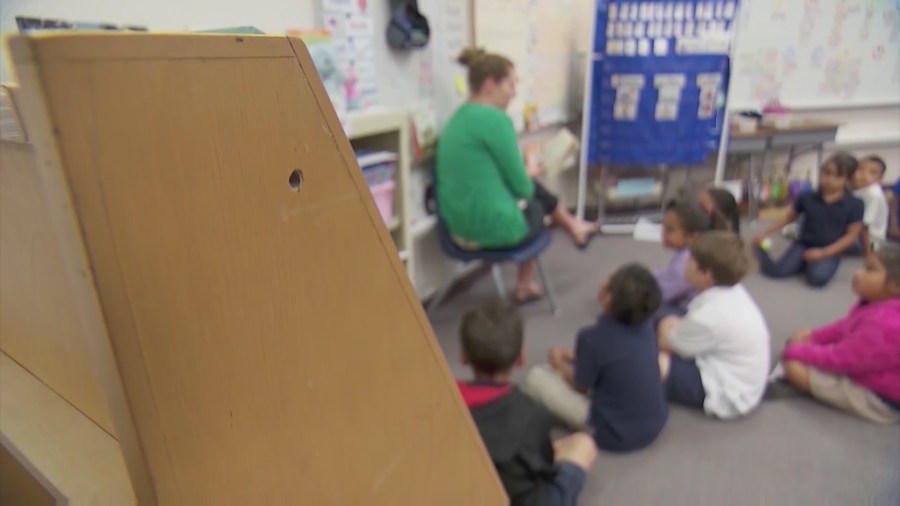 JEFFERSON CITY, Mo. — The state Department of Education estimates that more than 3,000 positions in Missouri schools have either remained vacant this year or have been filled by someone who is not qualified.

After a teacher shortage, the Department of Elementary and Secondary Education (DESE) is asking the General Assembly to use the state’s billion-dollar surplus to raise salaries for educators.

“Teachers don’t work for the money, but they need to be paid a decent wage,” said DESE Commissioner Margie Vandeven. “No other industry would be happy if 50% of the workforce left within the first five years.”


Under current state law, the minimum wage for teachers is $25,000, a law that hasn’t changed in years. Missouri has the lowest starting salary for teachers in the country. The department says about 8,000 teachers make less than $35,000. In the budget request to the governor, DESE calls on the general assembly to change the state law.

“Right now, when we’re talking about a $38,000 salary for our teachers, it’s just to make us a bit competitive with our neighboring states,” Vandeven said.

In July, the governor approved nearly a quarter billion dollars to raise minimum teacher salaries from $25,000 to $38,000. According to the legislation, the state pays 70% while the rest is borne by the district, which means schools must opt ​​into the program, but the state funding is only for one year. DESE Deputy Commissioner Kari Monsees said about 350 schools are participating in the program.

This year, lawmakers also fully funded school transportation for the first time since the 1990s, but because of inflation, it would cost $18 million to fully fund it again.

“That allows school districts not to use those local resources to support those additional services like transportation,” Monsees said. “As you can imagine, with the cost of fuel to date, so has the cost of buses and parts. We also have driver staffing issues so driver salaries and what schools offer just to have enough drivers have increased significantly.”

Monsees said the department needs to ask for more money in other areas as well.


“With all of our school feeding programs that we offer statewide, the cost has increased just as much as it has for all of our consumers in our state and across the country,” Monsees said.

Back in October, the Blue Ribbon Commission on Teacher Recruitment and Retention released its report after months of research to find out what could be done to address teacher shortages.

The Commission’s recommendation is to keep it permanent. In total, the Commission made nine recommendations to the Board, divided into three categories: immediate, short-term and long-term. At least half of the credited teacher remuneration.

The commission also recommends that the Department of Elementary and Secondary Education (DESE) expand its annual report on teacher recruitment and retention to include salary data for each local school district, teacher turnover by student achievement and race, a comparison of Missouris Starting and average salaries with surrounding states and job openings posted over the past year and the number of applications received for each job opening.

The state currently has a $6 billion surplus. While lawmakers on both sides of the aisle say they plan to make education a priority in this upcoming legislative session, Vandeven hopes they will pull through.

“You have the opportunity to make an impact, to create sustainable, long-lasting change for this state, I can’t think of a better place to invest than our children,” said Vandeven.

Also in next year’s budget request is more funding for charter schools under a new law passed earlier this year. At $77 million, it’s the largest new item in the budget. Due to teacher shortages, more than 140 school districts across the state have had to implement four-day weeks. Increasing the minimum starting salary for teachers comes at a high price. According to the report, about 8,000 teachers make less than $38,000. To increase their wages, it’s estimated to cost $29.5 million, which doesn’t address the pay plan compression issues that may be included.

Another part of the budget request sent to the governor includes funding for the career ladder program, which rewards teachers for extra work, such as extracurricular activities or tutoring. The state statute was also changed to reduce the years of service required to participate in the program from five to two years. Monsees says the department will pay each district more for the program. With the increase in funding and the addition of 10,000 now eligible teachers, the program cost is $31.8 million. While not all of the Commission’s priorities will be requested in next year’s budget, Vandeven said that will be the case going forward.

“These are just the very, very early steps in things that we want to tackle,” Vandeven said. “The other issues like mental health and general working conditions and board certification are long-term.” Back in June, the state Board of Education voted to expand test scores in hopes of getting more teachers certified. More than 500 teachers could be added to the workforce by optimizing the state’s qualification assessment.

According to DESE, about 550 teachers miss the qualifying score on the certification exam by between one and four questions. These candidates have already completed their accredited program but have not performed well enough on the exam.

Back in April, the board approved adding a standard measurement error (SEM) of -2 to test scores for basic certification exams after a new assessment was introduced in August and enough educators failed to score high enough.

In June, the board agreed to change the qualifying score to -1 SEM effective immediately. This means that someone who is missing a handful of questions will be certified.

Teachers are not the only ones leaving the education field. During the 2021-2022 school year, the state faced one of the largest number of superintendent vacancies in recent history. Of the state’s 518 school districts, 104 of them spent the summer looking for principals. More than 53% of these vacancies are due to retirements from the last school year.

On January 4th, lawmakers will reconvene in the Capitol.

https://fox2now.com/news/missouri/states-education-department-wants-to-use-missouris-6b-surplus-to-raise-teacher-pay/ The state Department of Education plans to use Missouri’s $6 billion surplus to raise teachers’ salaries

JoJo Fletcher and Jordan Rodgers are planning to have children in the "near future."