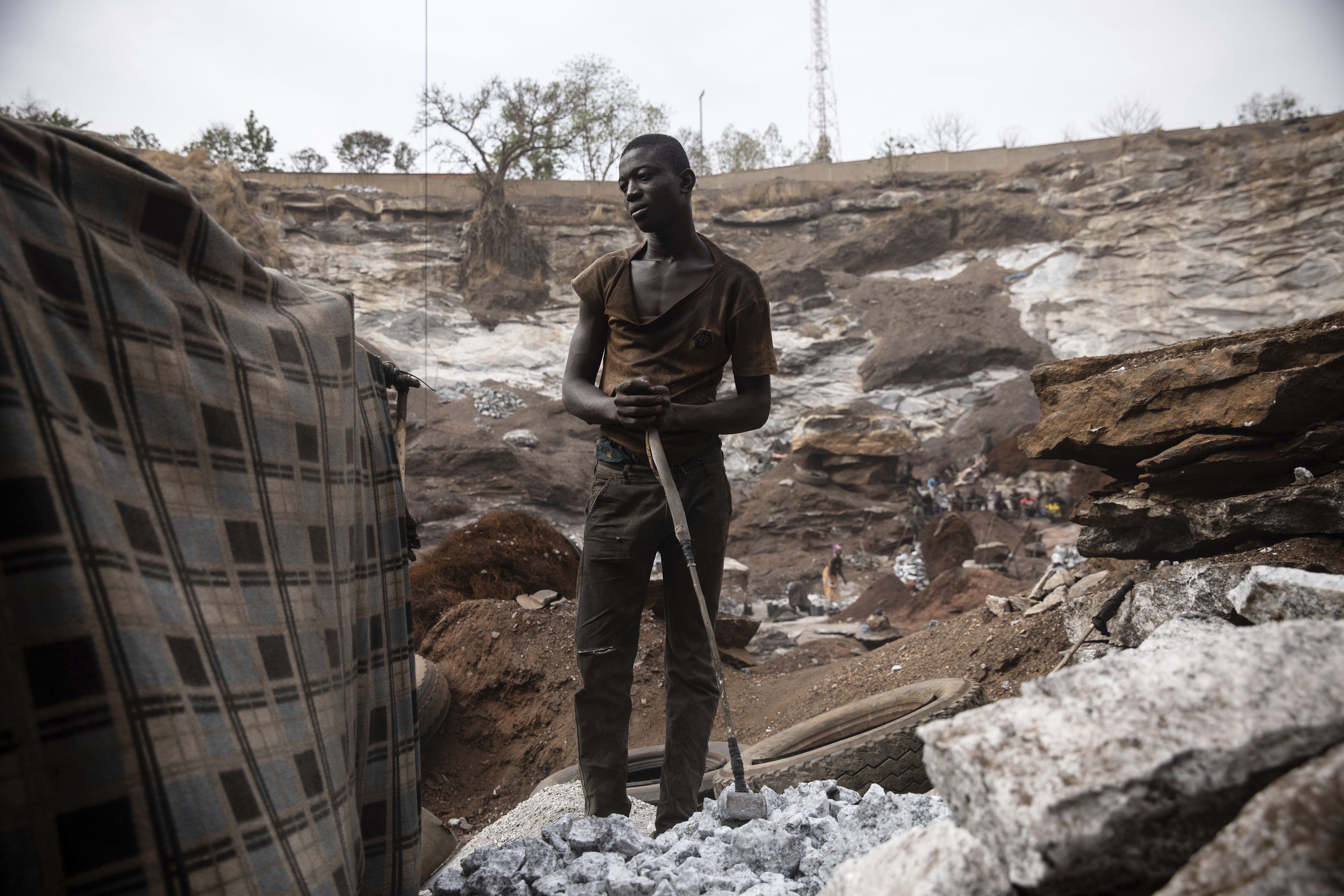 OUAGADOUGOU – Ami Sana hangs up a tattered tarp for a bit of shade where she can rest in the scorching sun on a break from pounding rocks.

“The work is hard. It makes my body weak, but what else can I do?” she asked.

The mother of six is ​​one of 2 million people displaced by Burkina Faso’s rapidly escalating Islamist extremist violence, according to the UN

Amidst the noise of clanging pickaxes and falling rocks, Sana has found work at the Pissy granite mine on the outskirts of Burkina Faso’s capital, Ouagadougou.

Lifting heavy rocks and pounding them into gravel to sell to construction companies is hard work that doesn’t earn her enough to adequately feed or raise her children, Sana said. But it’s the best work she could find.

The onslaught of civilians from rural villages plagued by extremist violence has pressured Burkina Faso’s cities.

“Some of the host cities have doubled or tripled in size in the last three years and their infrastructures are often stretched to the breaking point,” said Hassane Hamadou, country director of the Norwegian Refugee Council.

“Schools cannot accommodate all new children, water points cannot provide enough for everyone. Hundreds of thousands are left without access to education, clean water or healthcare,” he said.

The influx of displaced people creates competition among the approximately 3,000 people who work at the granite mine. At least 500 displaced people began working at the mine last year, making it difficult for the original miners to make a living, said Abiba Tiemtore, site manager.

“With more people, it’s difficult to collect that many rocks and it affects our daily income,” she said. Miners who used to make around $1 a day say they’re lucky now earning 80 cents.

When Burkina Faso came to power in January, Burkina Faso’s ruling junta pledged to stamp out extremist violence, but has done little to address the rising number of displaced people.

The government has a responsibility to provide these social services to the growing number of displaced people, said Alexandra Lamarche, senior advocate for West and Central Africa at Refugees International.

The Minister for Humanitarian Affairs did not respond to a request for comment on the situation.

So far, the junta has failed to curb extremist violence. According to a report by international aid organizations, 160,000 people were newly displaced in January, the second largest monthly increase in three years. Hardest-hit areas like the central-north region, which hosts Burkina Faso’s largest displaced population, are collapsing under the pressure.

“The impact of people moving from their farms to big cities is disorientation (and) increased poverty (and) fear,” said Abdoulaye Pafadnam, former mayor of Barsalogho, one of the key cities in the Center North region.

The violence blocks aid groups from accessing people in need. Roads that were safe six months ago are lined with explosives and the United Nations until recently had only one helicopter to ferry people and supplies across the country.

Pressures on cities have also begun to create rifts between some host and displaced communities. In the northern city of Ouahigouya, people sheltering in a crowded refugee camp said locals would chase them out of the forest if they tried to chop wood for cooking, blaming them for trying to destroy it.

With no end in sight to the jihadist violence, the numbers of displaced people in Burkina Faso are expected to continue flooding urban centers where they will look for jobs.

“I worry that I won’t be able to take care of my children,” said Fati Ouedraogo, a displaced mother of 10 in Ouahigouya. “When the kids cry, I don’t know what to do.”

https://www.local10.com/news/world/2022/05/08/burkina-fasos-displaced-numbers-swell-amid-jihadi-violence/ The number of displaced people in Burkina Faso is rising amid jihadist violence

Up to 60 dead feared after bomb hits Ukrainian school