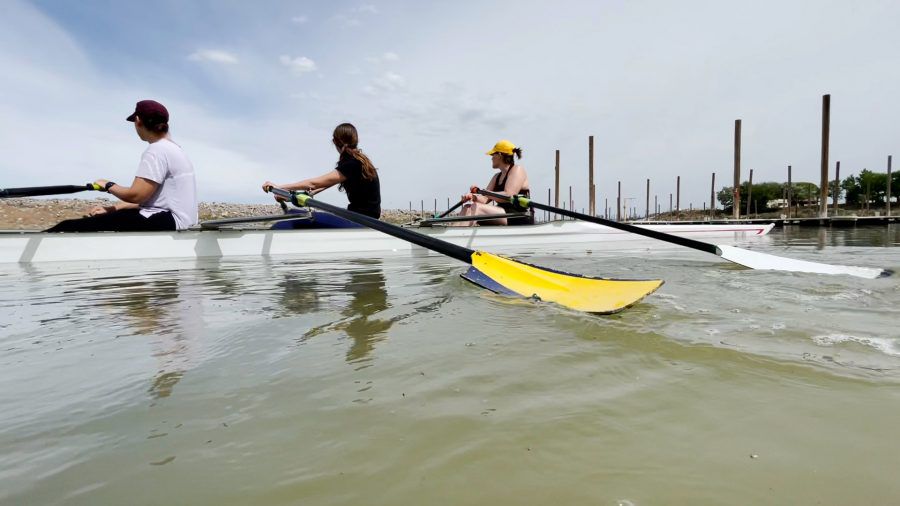 The low water level in the lake has presented some challenges, mainly in relation to an inland dock.

It might not be the first place that springs to mind when thinking of popular Utah vacation spots, but an enthusiastic group is working to change that perception.

For Diane Horrocks, the group’s president, rowing the lake has become a way of life – one that began decades ago.

“I went to a girls’ school,” she said, speaking about growing up in England. “One of my first best friends said, ‘Hey, if you come into the rowing club, there are boys.'”

Years later and after moving to the US, she teaches newcomers as part of National Learn to Row Day.

“Just to let people know that there is rowing in Utah,” Horrocks said. “Because we are a landlocked country, we are a semi-desert, people are amazed.”

Participants begin working on a rowing machine, then buckle their feet and begin on a grounded boat. Many came out of curiosity.

“I came here because my boyfriend invited me,” Sarah Wills said. “I like to try new things. I’ve lived on a lake before, so I’ve been by the water, but I’ve never tried rowing.”

While everyone has their reasons, for many, overcoming the thought of the lake as “disgusting” is the biggest hurdle.

“About a month out of the year it stinks,” Horrocks said. “But the rest of the year it’s great. We row on Saturday mornings in the winter and it’s like rowing on glass. It’s just idyllic.”

But Horrocks says one of the main reasons many join her club is because rowing is easy on the joints.

“We have people who used to play sports and got injured,” she said. One of our members is in their 70’s so you can keep it as long as you like. There are competitions, world rowing championships, they have a category over 80.”

It may be easy on the joints, but it’s definitely not easy. Wills can attest to that after trying her hand on the water.

“It’s hard,” she said, laughing. “It’s really tough. I feel like it’s the most coordinated sport I’ve ever tried.”

The low water level in the lake has presented some challenges, mainly in relation to a landlocked dock and the need to navigate a narrow channel to get out of the marina.

“There are a couple of 90-degree corners that you have to take very slowly and carefully because it’s so tight now. “, she said. “A rowboat has a very shallow draft, about six to twelve inches. Unlike the poor sailboats that all had to be pulled out, we’re still good. We should be good even if we lose a little bit more but we need more water.”

Because for Horrocks and their club, it’s not just about enjoying the lake itself – it’s about getting others to get the same feeling they get when stepping onto the open water.

“We made people appreciate the tranquility of the lake,” Horrocks said. “Last year was a record high, we had 50 members. This year we are already at 37.”

Whether it’s an injury, you want to try something new, or you just want to see what the lake is really like, everyone has their reasons to pay a visit to Utah’s hidden rowing club. And even if you just started rowing to meet guys, it all pays off in the end.

“When I was growing up, I actually met my husband at the rowing club,” Horrocks said.

This article is published by the Great Salt Lake Collaborative, a solutions journalism initiative that brings together news, education, and media organizations to educate people about the plight of the Great Salt Lake — and what can be done to help make a difference before it’s too late. Read all of our stories below greatsaltlakenews.org

Texas: On July 4, the decomposing body of a handcuffed man was found in a truck