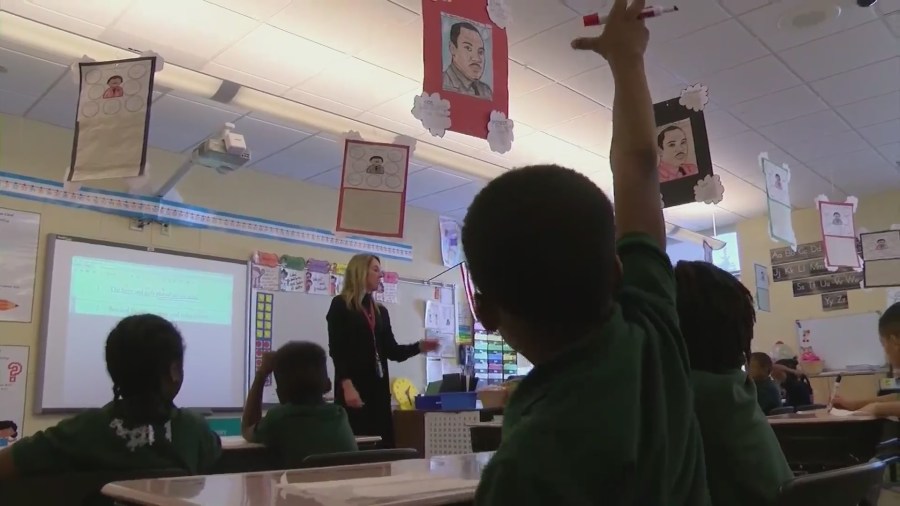 JEFFERSON CITY, Mo. — About 8,000 Missouri teachers make less than $35,000 a year, according to a report released by the Teacher Recruitment and Retention Blue Commission.
For months, the commission has been researching what can be done about the teacher shortage, and payment is an urgent concern.

On Tuesday, the Missouri State Board of Education accepted the commission’s handful of recommendations and will soon ask the General Assembly to make immediate changes to help recruit and retain educators.

“More pay for more work sounds like a simple concept, but we still have work to do,” Carol Hallquist, vice president of the state board of education, said during Tuesday’s meeting.

4 charged with mail theft in the St. Louis area


It’s an expensive but necessary plan of attack. In a state suffering from a teacher shortage crisis, leading some schools to switch to four-day weeks. Under state law, the minimum starting salary for teachers in Missouri is $25,000, which is about $9,000 below the state’s average living wage.

“I don’t know what more evidence we need to suggest that we have a resource delivery problem,” said Pamela Westbrooks-Hodge, a member of the state board of education. “If we attack the root cause in the structure and put some serious effort in there, we can see better results over time.”

The State Board of Education has set up a commission to investigate teacher shortages and how to keep them in the state. The Blue Ribbon Commission on Teacher Recruitment and Retention consists of 22 members from business, lawmakers and educators who were appointed by the board in the spring. After four months of research, the commission has completed its work.

“The commission is recommending that the Legislature amend the Missouri statute to raise the minimum salary for beginning teachers to at least $38,000 per year,” Blue Ribbon Commission Chair Mark Walker told the board on Tuesday. “Recognizing that there are many factors affecting retention and recruitment, the Commission believes that the starting salary should be increased.”

In July, the governor approved nearly a quarter billion dollars to raise minimum teacher salaries from $25,000 to $38,000. According to the legislation, the state pays 70% while the rest is borne by the district, which means schools must opt ​​into the program, but the state funding is only for one year. DESE Commissioner Margie Vandeven previously said that approximately 65% ​​of districts will participate this year. The Commission’s recommendation is to keep it permanent. In total, the Commission made nine recommendations to the Board, divided into three categories: immediate, short-term and long-term. At least half of the credited teacher remuneration.

The commission also recommends that the Department of Elementary and Secondary Education (DESE) expand its annual report on teacher recruitment and retention to include salary data for each local school district, teacher turnover by student achievement and race, a comparison of Missouris Starting and average salaries with surrounding states and job openings posted over the past year and the number of applications received for each job opening.

Trending: Live like a country king at this 50-acre estate in Labadie, Missouri


“In preparing this report, we found that teachers are critical not only to student achievement but also to the overall success of the state,” said Walker, CEO of TransLand, a trucking company near Springfield. “The strength of the Missouri faculty has a direct impact on Missouri’s economic development and quality of life.”

“We can’t fall behind again like we did and catch up, that’s just not healthy,” Walker said. “Perhaps the biggest surprise to business people working on the Blue Ribbon Commission is the lack of flexibility from all of you [the board] to fill high demand positions, it’s incredibly inadequate in today’s highly competitive marketplace.”

Increasing the minimum starting salary for teachers comes at a high price. According to the report, about 8,000 teachers make less than $38,000. To increase their wages, it will cost an estimated $29.5 million, which doesn’t address the pay plan compression issues that may be included.

The cost of expanding the career ladder program, which rewards teachers for extra work like extracurricular activities or tutoring, is expected to cost $56.2 million. The state statue was also amended to reduce the years of service required to participate in the program from five to two years, which could add $20,000 to the cost.

For now, the state has no cost to increase mental health resources for educators. The commission recommends additional paid wellness days, which would require more substitute teachers.

The tuition grant for approximately 100 educators would cost the state approximately $5.8 million based on the average tuition for Missouri higher education for the 2020-2021 school year, which was $14,564.

“The actual implementation of that, the funding piece, that’s kind of going to be on your plate,” Walker told the board when asked when those recommendations will go into effect and be funded. “They can all decide the timing and ultimately what will work legally and in what ​​year.”

According to researchers at Missouri State University College of Education, 141 districts will have four-day school weeks in 2022, an all-time high.

Back in June, the State Board of Education voted to expand test scores in hopes of getting more teachers certified. More than 500 teachers could be added to the workforce by optimizing the state’s qualification assessment.

According to DESE, about 550 teachers miss the qualifying score on the certification exam by between one and four questions. These candidates have already completed their accredited program but have not performed well enough on the exam.

Back in April, the board approved adding a standard measurement error (SEM) of -2 to test scores for basic certification exams after a new assessment was introduced in August and enough educators failed to score high enough.

In June, the board agreed to change the qualifying score to -1 SEM effective immediately. This means that someone who is missing a handful of questions will be certified.

Teachers are not the only ones leaving the education field. During the 2022–2023 school year, the state faced one of the largest number of superintendent vacancies in recent history. Of the state’s 518 school districts, 104 of them spent the summer looking for principals. More than 53% of these vacancies are due to retirements from the last school year.

Of the 104 superintendent posts, all have been filled, but some with interim posts.

To view the map created by Jon Turner at Missouri State University of the districts adopting a four-day workweek for the 2022-2023 school year, click here.

The Blue Ribbon Commission and State Board of Education will be hosting eight town halls across the state over the next month to discuss the report and gather feedback from the community and school districts. All meetings begin at 6 p.m

click here to see the full report of the Commission.

Amazon Flex Worker is sent home and still gets paid

Double murder suspect Mark Brown told his pal he was a psycho.

Huge crowds flocked to the stores for Black Friday