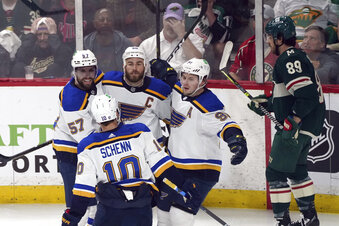 Vladimir Tarasenko scored early in the third period to break a 2-2 tie and then scored two more goals for a natural hat-trick to lead the Blues to a 5-2 win in Game 5 of their series against the Wild . The win gives the Blues a three-game-to-two lead in the best-of-seven series. Ryan O’Reilly opened the scoring in the first period with his fourth straight goal. The Wild then scored back-to-back power play goals from Kirill Kaprizov to take a 2-1 lead. Brandon Saad tapped Jordan Kyrou’s shot in the second half to make it 2-2. Then Tarasenko took over with his second career hat-trick in the playoffs. Jordan Binnington stopped 30 Wild shots to give the Blues the win in goal.

The Blues can now wrap up the series with a win in Game 6 on Thursday at the Enterprise Center.

Urgent calls to BAN tanning beds to save "thousands of lives".