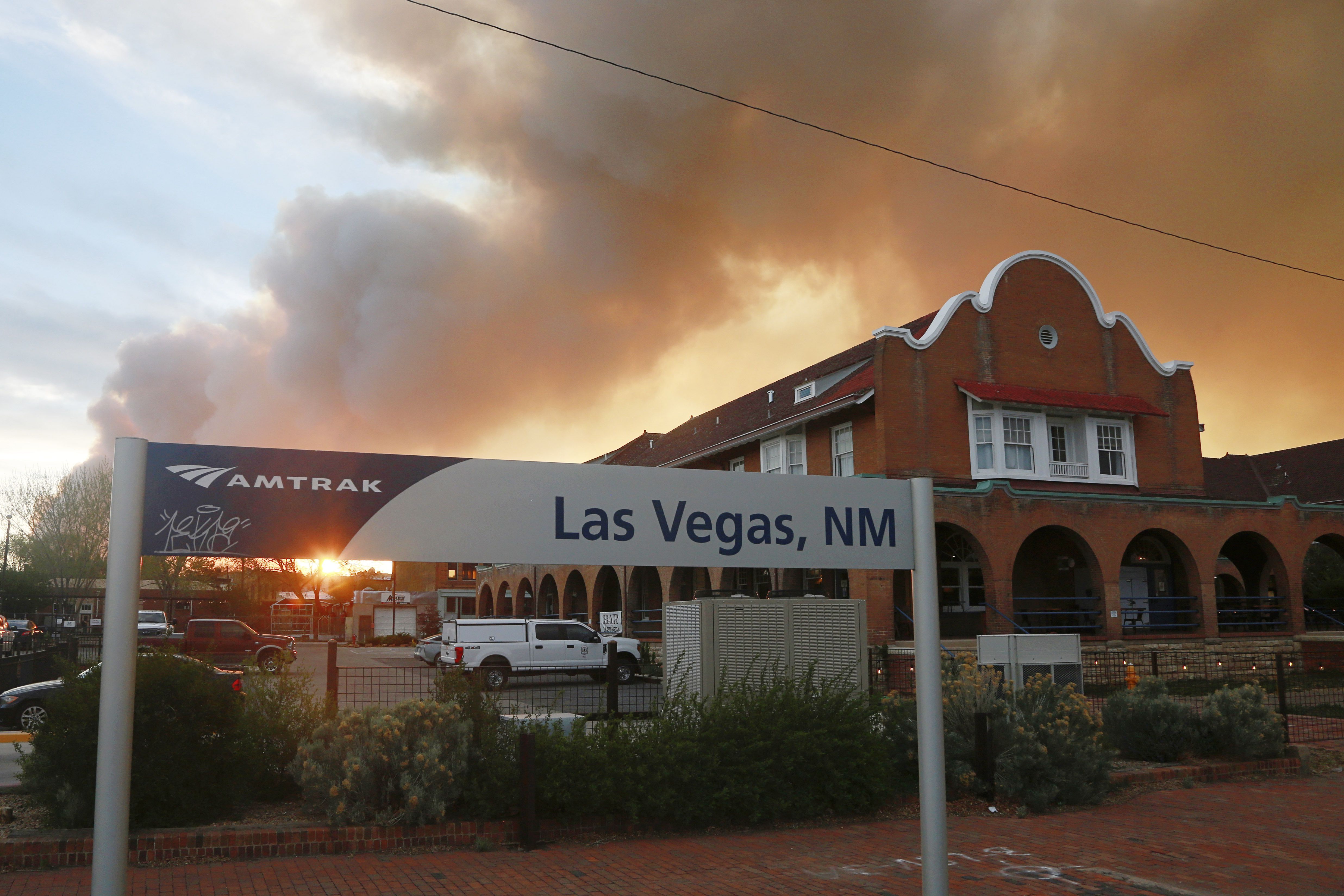 The area’s largest city — Las Vegas, New Mexico, with a population of 13,000 — was largely safe from danger after firefighters there largely stopped a blaze from moving east. But the wildfire’s northern and southern flanks proved more difficult to contain as wind gusts exceeded 80 km/h.

“It was a challenging day. The winds have increased; They haven’t let up,” fire department spokesman Todd Abel said Sunday night.

A so-called “red flag warning” warning of a high fire risk due to heat, low humidity and fast winds will remain in place until Monday night, nearly four days after it began.

More than 1,600 firefighters were deployed Sunday to battle the two large blazes that burned northeast of Santa Fe, New Mexico. Together they covered 275 square miles (about 710 square kilometers), an area more than twice the size of Philadelphia. By Sunday evening, firefighters had contained almost half of the flames.

Still, the threat was far from over as the National Interagency Fire Center said early Sunday that more than 20,000 buildings remained at risk from the fire, which has destroyed about 300 homes over the past two weeks.

High winds are in many ways firefighters’ worst nightmare, especially in conditions as hot and dry as those crews have been grappling with in the Southwest since early April.

These winds not only fuel and spread the flames, but also keep air tankers and light aircraft grounded. This prevented them from dripping water directly onto the fire or applying fire retardant in front of its path, allowing bulldozers and ground crew to dig firebreaks in places where there are no highways or roads to stop the advance.

In extreme conditions, like those in New Mexico, even the helicopters that can normally get airborne — at least in the early hours of the morning before the wind picks up in the afternoon — are on the ground. This prevents them from gathering information about developments overnight. The planes were able to fly early Sunday but were grounded in the afternoon.

“It’s obviously not good; it takes a tool away from our toolbox, but we’re not stopping,” said fire department spokesman Ryan Berlin.

Officials were concerned about winds that had ignited more flames on the northern edge of the fire, near some very small communities of several hundred people. Gusts drove fires into a ravine, making it difficult to get there, said Dave Bales, the chief of operations.

He and other officials urged people to be ready to evacuate or to leave immediately if told to do so. Should the fire overwhelm a community, heavy smoke and congested roads could make it difficult for people to escape and for firefighters to access the area, he said.

These cities are on a state highway that runs from Las Vegas, New Mexico to Taos, a popular spot for skiing and other outdoor recreation. However, Taos was not threatened, but people in some parts of larger Taos County were ordered to prepare for possible evacuations.

In the small community of Las Vegas, some residents returned Saturday and some local businesses reopened. Safety lines set up by bulldozers and wind direction helped protect the community over the weekend. However, some firefighters warned people not to be aware of evacuation orders as conditions could change quickly.

“Just because the winds are coming from one direction doesn’t mean they can’t change direction, so it’s better to be prepared and have residents ready,” said Wendy Mason of the New Mexico Forestry Division.

Nationwide, nearly 2,000 square miles (5,180 square kilometers) have burned so far this year, with 2018 being the last time so many fires were reported at that time, according to the National Interagency Fire Center. And forecasts for the remainder of spring do not bode well for the West, where long-term drought and warmer temperatures caused by climate change have combined to exacerbate the threat of wildfires.

"VIP List": Meet the TikTok duo leaning into toxic personas for the lolz