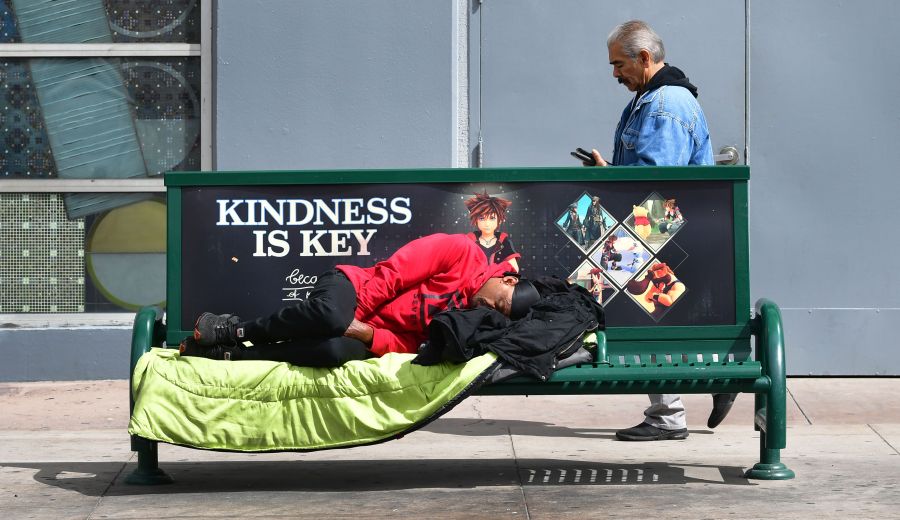 (BCN) – Desiree Garibay used to sleep outside in Redondo Beach. One night in July 2020, she was lying in a city park and the police gave her a ticket. She missed her court date, and the ticket became a warrant for her arrest.

She said she became even more determined to avoid the courthouse. But on a Wednesday in April — almost two years after she got the ticket — Garibay stood by while Los Angeles Deputy Sheriff’s Deputy Lonnie Smith waved a metal detector stick over her black Selena sweatshirt. Then she entered what appeared to be an outdoor job fair, with white tents arching over picnic tables.

Cheerful nonprofit workers in matching turquoise shirts greeted her and asked if she needed anything. Palm trees swayed in a breeze off the ocean six blocks west. A black-robed judge sat behind a court bench, but instead of delivering verdicts, she told the accused things like “excellent work,” “congratulations,” and “you have so much good news.”

Technically, this is still the Los Angeles County Superior Court. Unless it’s outside. And, more critically for the likes of Garibay, 31, the court makes a promise to the homeless defendants: If you show up in court, we won’t put you in jail. In addition, they promise to help those present to find housing.

The job fair tents are actually a collection of homeless advocacy groups, legal cleanup teams, mental health and drug counselors, and housing groups. California already has more than 450 homeless courts in 19 counties, but Redondo Beach court organizers say their model works better. Here the court convenes at a central location where the homeless congregate – in this case near a food donation center and two religious charities for the homeless.

Now the organizers want to adopt this concept and apply it nationwide. A bill sponsored by Torrance Democrat Al Muratsuchi, AB 2220, would create a pilot homeless court program and offer grants to counties that can adapt programs to their own communities. An outdoor space in Sacramento in August may not be as appealing as a spring day at the beach in Los Angeles County. But the idea is to help counties move their courts to places where the homeless are more likely to pop up, while also offering services like job assistance and substance abuse.


The details of the bill’s funding are unclear. The bill provides for the Judicial Council to be given an unspecified amount from the general fund to administer the programs.

“At first I didn’t answer the subpoena, I got a warrant, and there were also old warrants, three (total),” Garibay said.

It’s a familiar refrain for homeless advocates and defense attorneys: an original indictment metastasizes into a string of missed court dates, no-show warrants and possible prison sentences. But Garibay left the court smiling, her ticket turned down. She also walked away with a hint of a new place to stay.

“The best part, aside from bringing it to the community where they’re located, is that a lot of what we do for homeless people in California happens in silos,” said Mike Webb, Redondo Beach City Attorney. “We bring everything together in one place.”

From all outward signs, the homeless court appears to be working. Attendance is far from perfect, but it is much higher than what homeless courts typically attract when court is held in Torrance County Court, Webb said.

Statistics from the City of Redondo Beach show monthly attendance ranging from 68% to 100%, for an average attendance of 80% since the court moved outside in September 2020. Webb is the public face of the program and has testified twice in the Capitol, saying the court’s encouraging attendance statistics were a combination of design and circumstances.

The court only moved outside because of the pandemic. “I wish I could say we nailed it, but really, the pieces fell together and it became something that worked,” Webb said. “In my 35 years in the criminal justice system, I have not seen anything (else) where everyone’s interests coincide.” Previous attempts at nationwide homeless justice programs have failed.

A 2002 proposal to set up a pilot program for the homeless in four counties was rejected by the government at the time. Gray Davis, who cited the proposed $24 billion cost of the state’s budget deficit bill. A 2013 bill that would have encouraged counties to make homeless courts more accessible was brought to the assembly’s Judiciary Committee for hearing, but was postponed and never heard.

Muratsuchi is introducing the courts as an alternative to Gov. Gavin Newsom’s proposed CARE (Community Assistance, Recovery and Empowerment) courts. Newsom’s proposal would require all 58 counties to create courts that could compel people with serious mental illness to seek treatment.

You don’t have to be homeless to participate. The proposed CARE courts were criticized at their first hearing in late April by mental health advocates and some Democratic lawmakers, who highlighted the proposal’s wording, which allows courts to involuntarily commit involuntary defendants to mental health treatment.

“We see that there was a lot of opposition in the CARE courts,” Muratsuchi said. “While debates continue, the Legislature and Governor should keep this tried and tested model of homeless courts in mind.”

Fairfield firefighters put down the structure’s fire with two alarms


Muratsuchi said the “key difference” between the CARE courts and the Redondo Beach model is that the latter will not force defendants into mental health treatment.

This dissenting vote by Placerville Republican Frank Bigelow is rooted in an analysis by a Republican caucus adviser to the convention, who warned members that the courts could allow pre-trial diversions for any crime, said Hannah Ackley, Bigelow’s chief of staff.

Ackley said diversion programs for mentally ill defendants, for example, do not allow pretrial diversion for serious crimes, including murder. She said the consultant’s report was not public. “Our counsel suggested that the law could be supported if it were amended to include the same restrictions on homeless suspects that would apply to mentally ill defendants,” Ackley said in an email to CalMatters.

Muratsuchi told CalMatters he plans to change the language of the bill related to crimes. The courts are already locked in the ongoing public debate over Prop 47, a 2014 law that reclassified several property and drug offenses from felonies to misdemeanor and sunsets in November.

A team from the Los Angeles County Public Defender’s Office makes special visits to homeless courts to help defendants clear their criminal records. One of the team’s primary jobs at the Redondo Beach Court of Justice is reclassifying convictions — which were felonies prior to the passage of Prop 47 in 2014 — as misdemeanors. That, said Los Angeles County Assistant Public Defender Tom Moore, is key to getting the defendants a home.

“One of the biggest barriers to housing is a crime on your record,” Moore said. “We often run into clients who don’t realize they can reclassify these crimes.”

Garibay said she has moved in with her boyfriend in Torrance but is still looking for a permanent home.

“They actually work with you,” she said. “I just like the fact that they help me find an apartment, just my own apartment that I can finally call home.”

Best Star Wars Day Memes, Quotes and Images for May 4th Be With You 2022 - The US Sun