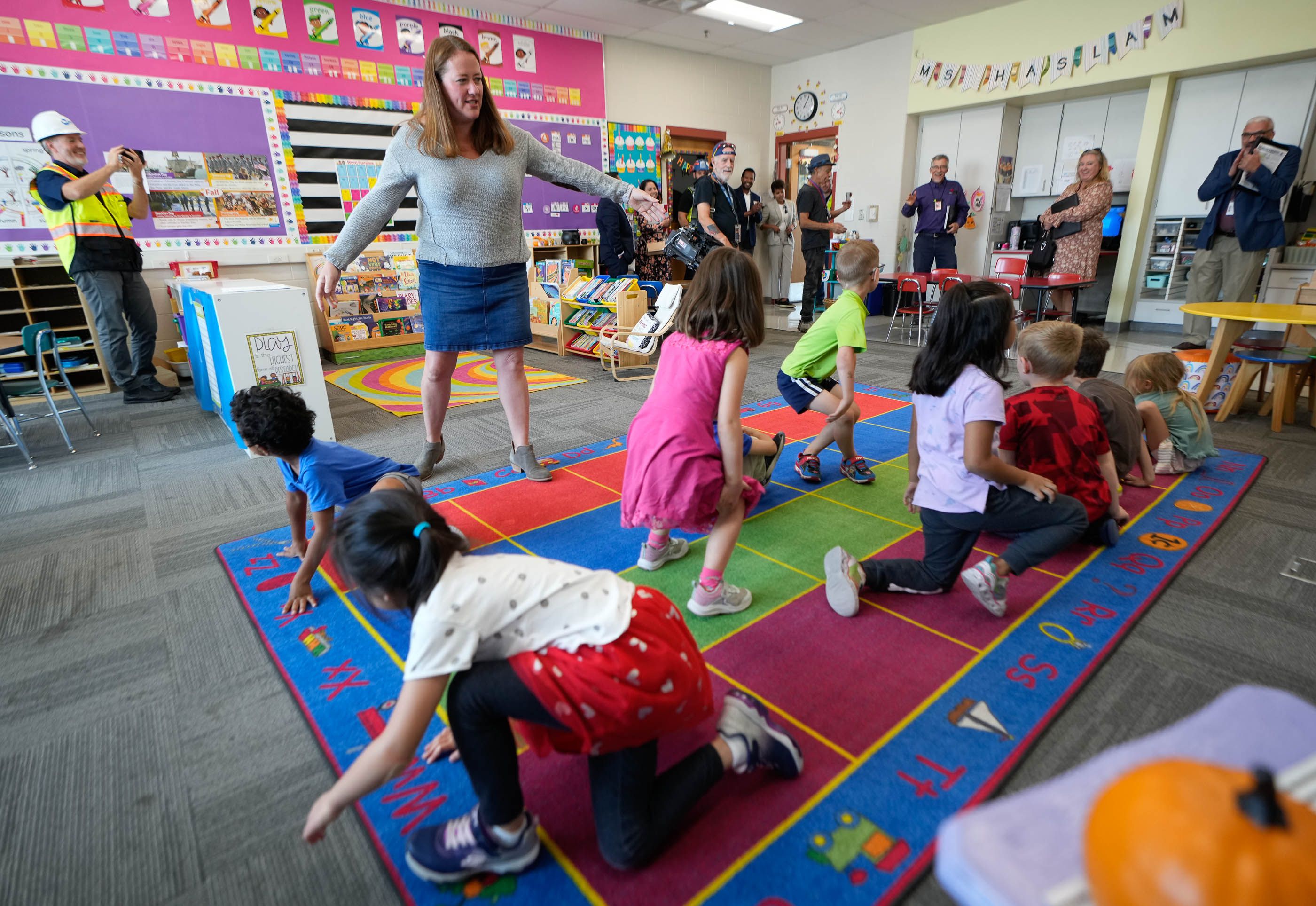 By refusing to deal with declining student enrollment, Salt Lake City’s school board members have unnecessarily cost taxpayers millions of dollars — collecting and spending that money to prop up emptying schools that they have known for years should have been closed.

State auditors chastise the Salt Lake City School District for mismanaging its responsibilities and, for the first time, show just how much of a financial impact has come from its inaction, in a 78-page report released Tuesday.

Board members inappropriately insert themselves into the day-to-day operations of the district — which the report calls, in some cases, unethical — and auditors criticize them for firing two superintendents in the last two years. Meanwhile, student test scores are dipping and little is being done to focus on performance post-pandemic, auditors found.

There are 17 recommendations for how the district can improve — but no longer operating too many schools for too few students would go a long way to start, the auditors say.

Board members have long known about the dwindling student population, the audit notes, which the district has studied and talked about for almost a decade; the board, though, has never taken action to address it.

The trend of dropping students has been consecutive for the last eight years, the auditors add, though it started even before that, in 2014. And the district has lost 13% of its enrollment, or about 3,000 kids, in just the last five years — the highest number of any district in Salt Lake County.

“Despite the availability of this data,” the auditors from the Office of the Legislative Auditor General note, board members have instead voted to rebuild three elementaries since 2016 and approved two increases in property taxes for residents of the state’s capital city to cover its deficits.

The audit says those hikes wouldn’t have been needed “had the district adjusted its number of elementary schools in a timely manner and chosen not to rebuild.”

If the district hadn’t approved those property tax hikes, the first for $7.5 million per year in 2016 and the most recent this year, for $1.5 million per year, taxpayers could’ve saved more than $40 million in the past six years, according to the audit.

Over that same time, the population of the district’s elementary schools, in particular, has dropped dramatically. In 2016, 80% of the space in elementary buildings was being utilized. This fall, only 57% is being used.

And if the board continues not to act on closing schools and stem the losses, Salt Lake City taxpayers will likely end up paying even more — since state education funding to schools is based on enrollment.

The auditors wrote: “We believe the district may have to rely on local sources more heavily in the future if action is not taken to make the district more efficient as enrollment declines.”

How does the district compare?

The stark audit comes after Salt Lake City School District has faced intense scrutiny over the past few years for dysfunction on its board and decisions made during the pandemic.

Republican state legislators particularly didn’t approve of the board voting to keep the district entirely online in fall 2020 as COVID-19 cases climbed in the capital. At one point, they threatened to withhold bonuses from Salt Lake City teachers unless the district returned to in-person classes.

The request for this audit came directly from lawmakers, who told staff they wanted to “determine the district’s efficiency and effectiveness in using funds.”

The Utah Legislature voted in 2021 to expand its budget reviews to include school districts — which they then tied directly to concerns about Salt Lake City — and the district is the second one they’ve chosen to investigate since then. Auditors looked at Weber School District earlier this year.

It’s spending $15,401 per kid, with construction costs included — which is the most per student, compared to its peer districts in the state.

The average for its peers — which include nearby Granite and similarly situated Provo City School District — is $12,367.

Salt Lake City’s total also is far above the state average of $12,295.

Put simply, the state gives school districts money based on how many students they enroll. School districts can then collect more money through property taxes.

Salt Lake City has a large tax base, unlike other districts, so it is able to scoop up a large amount of money there to offset the difference it needs.

But it’s overburdening taxpayers, the audit said. More than 50% of Salt Lake City School District’s budget relies on property taxes. Other peer districts are much lower. Tooele County School District, for instance, is at 25%.

Meanwhile, Tooele School District has grown by roughly 58% in the last five years, as Salt Lake City’s student population has declined. Tooele is also operating more efficiently, with 78% of its elementary building space being utilized, according to the audit. Cache County School District is at 102% utilization.

Both Tooele, at 23,828, and Cache, at 19,731, also have more students than Salt Lake City. The auditors conclude the other districts are doing more with less money, operating more effectively.

Meanwhile, other districts are also choosing to close schools. Both the boards of Ogden School District and Granite School District, also in the peer group, have recently voted to shutter elementaries and consolidate resources. The auditors say that was the financially responsible decision.

It would take closing six elementary schools in Salt Lake City for the district’s remaining elementaries to be filled to 75% capacity, the audit said, which is the minimum where schools should operate, according to national standards.

And that doesn’t take into account future declines, the audit warns, which are projected.

In 2019, the district’s superintendent had recommended closing Bennion Elementary School, where the population was dwindling. But parents pushed back, pointing to the school’s unique population, with many students of color and more who are economically disadvantaged. Some live in nearby homeless shelters.

The school board voted to postpone making a decision.

In February of this year, the board was again talking about possibly closing schools. It had finished a study that projected the decline to continue due to slowing birth rates in the state, expensive new housing in the city that’s pushing low-income families out, and the opening of several charter schools.

But again, they delayed. The board decided to follow a recommendation from its new superintendent to postpone taking any steps toward shuttering schools until 2023.

The audit says by delaying then, it cost taxpayers $3.6 million to keep six schools running this school year that didn’t need to be.

Now, all 27 elementary schools in the district have seen a dip in enrollment. And every one is operating below capacity. Bennion, in particular, remains the lowest, at 25% utilization. In 2019, when it was first considered for closure, it was at 36%.

According to Salt Lake City School District policy, the superintendent is the one to recommend closures — and turnover in that office has complicated efforts to close schools, auditors said.

They suggest adopting a different policy. Granite School District, for instance, has an ongoing population analysis committee that meets regularly to look at enrollment numbers and recommend schools to shutter.

The school district is essentially operating the same number of schools and at the same budget — roughly $300 million per year — with fewer students. That means it pays utilities for buildings that aren’t full.

In fact, the district is spending $5 million a year just on utilities, according to the audit. That puts Salt Lake City “closer to that of school districts with more schools and more students.”

The district has recently unveiled a plan to have its utilities be more sustainable — but that costs a lot upfront, the audit noted, before money is saved down the road.

The audit puts it this way: “Keeping low-enrollment schools open likely contributes to SLCSD having one of the highest school administration costs per student in the state since these costs are being allocated to fewer students at each school.”

The district could also consolidate on support staff, including lunch workers. Auditors believe that would also allow the district to raise the pay for those who remain to more equitable levels.

Then why did the district rebuild three elementaries? And why is it looking to rebuild its high schools next?

The audit expresses particular frustration over Salt Lake City rebuilding three elementary schools, starting in 2016 with Liberty Elementary, while enrollment was declining. The district then completed a new Meadowlark Elementary and Edison Elementary.

The district has said two of the buildings were not seismically safe. But the auditors suggest that should have been a reason to look at closing those buildings and moving students around more efficiently to deal with the declining enrollment.

Instead, the district spent a combined $68 million on the projects.

“SLCSD board members had access to current enrollment and projected enrollment data at the time they decided to rebuild schools between 2016 and 2018,” the auditors wrote. “This data projected continued enrollment declines into the future. The SLCSD board made decisions that were inconsistent with this data.”

The auditors are worried, too, about the district’s plans to rebuild West High and Highland High next.

“Based on demographic projections, enrollment at the district’s high schools is projected to decline by 12 percent or over 800 students over the next 10 years,” the audit states.

What unique challenges does the district face?

It has the highest percentage of students with special needs of any district in the state. And it’s the third highest for percentage of those learning English, such as refugees. It also sits in the top ten for students who are economically disadvantaged.

All of those factors generally lead a district to create special programs to accommodate the needs. And that means more spending.

Why is closing schools beneficial, outside of saving money?

The audit said while small class sizes can be beneficial for students, that’s not generally what happens at schools where the population declines; it’s a misunderstanding many have about the situation.

Instead, there is usually only one teacher per grade level for a huge class.

The auditors said it’s not only more cost efficient to consolidate into fewer schools, but students also get a better education. There are more teachers in each grade to collaborate. If a student doesn’t work well with a particular teacher, there’s more opportunity to move them to another classroom.

The audit does not detail what closures would mean for staffing, though, including cuts. The district has previously said it hopes any teacher reduction could be achieved through retirements.

What does the district say?

In a letter written in response to the audit, Salt Lake City school board President Melissa Ford and interim Superintendent Bates say they are dedicated to “making changes to increase efficiency, accountability and compliance.”

They acknowledge that they’re currently gathering data on schools to look at closures and what would be the most “appropriate configuration.”

But they also note that they don’t agree with everything in the audit. And they say they won’t promise to make all of the changes because some would require legislative action and others would require board action.

“It would be inappropriate for this response to include any assumptions related to future official board action,” they write.

They do, though, pledge to annually look at enrollment numbers through the lens of possible school closures going forward.

Shawn Mendes and More Stars Who Give Back