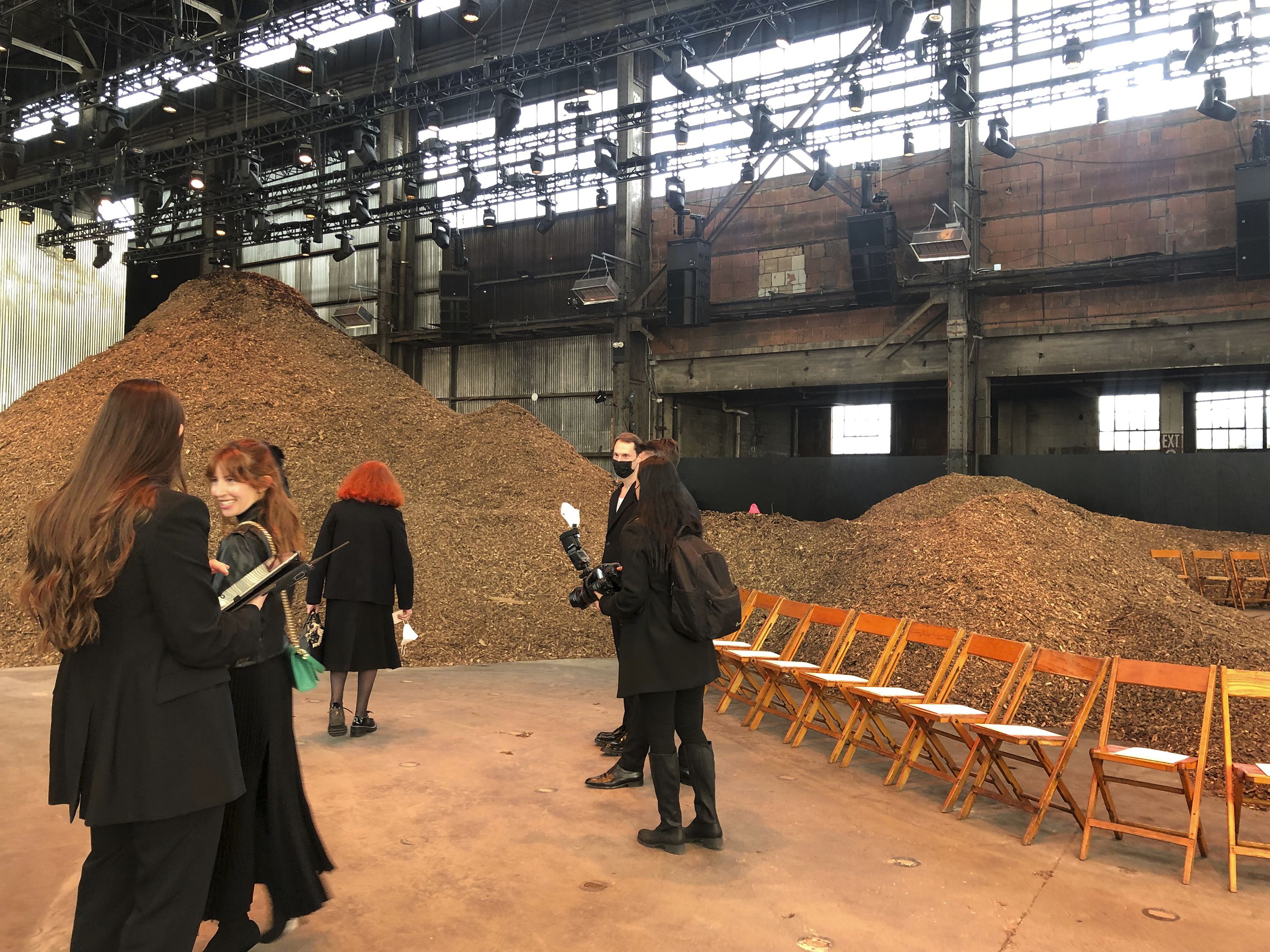 NEW YORK – Sarah Burton brought the home of Alexander McQueen to town for the first time in 23 years with a catwalk show that took place Tuesday night amid huge piles of wood shavings in a sparse Brooklyn warehouse.

Mycelium, the living mushroom alternative to leather, was a theme Burton had in mind and was sewn or woven into some of their Fall Winter looks. But none of this was used to make the clothes. Lee Alexander McQueen’s successor told journalists after the show that she’s still experimenting with sustainable mushroom leather and other alternatives, sticking to the real thing for now.

Opening with an asymmetric black leather bustier dress, Burton mixed other black looks with accents of neon yellow, green, red, orange and blue. There were white spray-paint effect double-breasted suits in yellow and black, and another in the same vein in red, reminiscent of McQueen’s famous Spring 1999 show, in which model Shalom Harlow’s dress was adorned with paint dispensed by moving robots.

One of Burton’s models wore a multicolored knit sweater with a giant yellow mushroom on the front. A one shoulder dress with crystals, silver beads and mother of pearl mushroom embroidery on an invisible tulle base. Burton’s psychedelic state of mind translated into other looks as well, including a black tulle gown with bright red and bright orange crystal beads and sequin embroidery.

What does all this have to do with New York?

Burton said she wanted to capture the vibrancy and character of the city’s “big personality” in her dresses, pants and trench coats, with each piece having its own “individual character.” Some were sharp cut (McQueen started on London’s Savile Row). Others were carefully draped or cut lace, another nod to an earlier collection by McQueen, who committed suicide in 2010.

More of Burton’s pieces have been deconstructed into knits, wool and zip-heavy black leather.

“America and New York have always been such a part of McQueen and it’s been incredibly supportive of us as a house,” she said. “It’s great to be able to honor that in some way and come and exhibit in New York. It’s an amazing place.”

As for the mycelium, Burton was inspired by the bright colors of real mushrooms that she looked at one day. Mycelium is the primary “plant” part of a fungus, made up of thousands of delicate, interwoven filaments containing cells that provide the fungi with an immune response.

The collection, she said in her show notes, was inspired by the idea of ​​community, that mycelium in particular, and nature in general, “is a community that is much, much older than us.”

Backstage, Burton added that she really loves “how the trees talk to each other and kind of heal each other.” With the pandemic over two years, she said, “this seems more important than ever to the people who walk among them.” One of those people was Letitia Wright among her guests in the front row.

According to Burton, 85% of the collection consists of sustainable and recycled material. The wood shavings used to create her awesome set were sourced from already fallen trees and are being sent to a farm for use by an artist. Regarding leather alternatives, she said the home could one day be leather-free.

So does Burton’s mushroom-obsessed collection have anything to do with a little microdosing on her part?

“Not at the moment,” she laughed. “I probably have to.”

One dead, one arrested after being shot