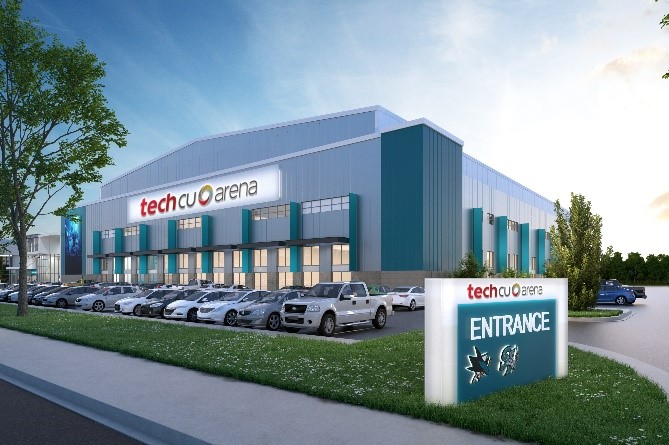 Sharks Ice at San Jose has signed Tech CU as a naming sponsor for the arena being built for the San Jose Barracuda ice hockey team in a 10-year deal approved by the San Jose City Council on Tuesday.

The new 4,200-seat Tech CU Arena at Sharks Ice in San Jose — or Tech CU Arena — is expected to open in August and is attached to the ever-expanding skating facility at the corner of 10th Street and Alma Avenue. You might as well call this area “Credit Union Corner,” with all the sporting facilities around that bear the names of financial institutions.

In addition to Tech CU Arena, there’s also Excite Ballpark — the former Municipal Stadium that was home to the San Jose Giants — and CEFCU Stadium, which many of us still think of as Spartan Stadium, across from Sharks Ice. Make no mistake, Provident Credit Union has secured the naming rights to the San Jose State Convention Center on campus. Star One Credit Union has stayed out of the name game so far, but there may be a possibility if this new cricket facility is built at the Santa Clara County Fairgrounds.

(And if you’re wondering why so many banks and other related businesses have their names on sports arenas like Chase Center, SoFi Stadium, and PayPal Park, that’s the same reason Willie Sutton robbed banks: Because that’s where the money is.)

Incidentally, the council’s approval came a few weeks later than expected, as it was discovered that while the arena’s longer official name included “San Jose,” the outdoor signage planned for the facility did not. The resolution, passed Tuesday, includes wording requiring Sharks Ice to include the city’s name on outdoor signage in any future naming rights agreements for the city-owned facility.

PROJECT CORNERSTONE RETURN: Given that the driving force behind the YMCA’s Project Cornerstone initiative is to provide students with good role models and a caring environment, one might have guessed that the program would not be delayed long because of COVID-19. After being forced to cancel and hold a virtual event with no awards in 2020, Project Cornerstone is bringing back its list of awards for this year’s Virtual Asset Champions Celebration on March 24th.

Kindness Boomerang video artist Orly Wahba will host the event, which will also feature entertainment from San Jose Junior Taiko and San Jose native Megan Masako Haley, who has appeared in both Broadway and Off-Broadway productions. More information about the program and the free registration at 10 a.m. can be found at www.ymcasv.org/ymca-project-cornerstone.

A LAUGHTER FOR HEALTHCARE WORKERS: After two years of delays caused by COVID-19, the San Jose Playhouse is finally kicking off its live theater season with the comedy “La Cage Aux Folles,” which opens March 31 at the 3Below Theaters downtown. And as a special thank you for their heroic service during the pandemic, healthcare workers are being offered free tickets to the show, which runs through April 24 and will feature Stephen Guggenheim and Alan Palmer (known for his Off-Broadway show, ‘The Fabulous Divas of Broadway.”

“We have patiently awaited a slot on our production schedule that would match Mr. Palmer’s availability to bring his considerable talent and experience to the role,” said Scott Guggenheim, executive director of the San Jose Playhouse.

To request free tickets for yourself or as a gift for a healthcare worker, please visit sanjoseplayhouse.org/hero.

https://www.mercurynews.com/2022/03/16/san-jose-barracudas-planned-arena-gets-a-name-creating-a-corner-for-credit-unions/ San Jose Barracuda’s proposed arena gets a name and creates a corner for credit unions