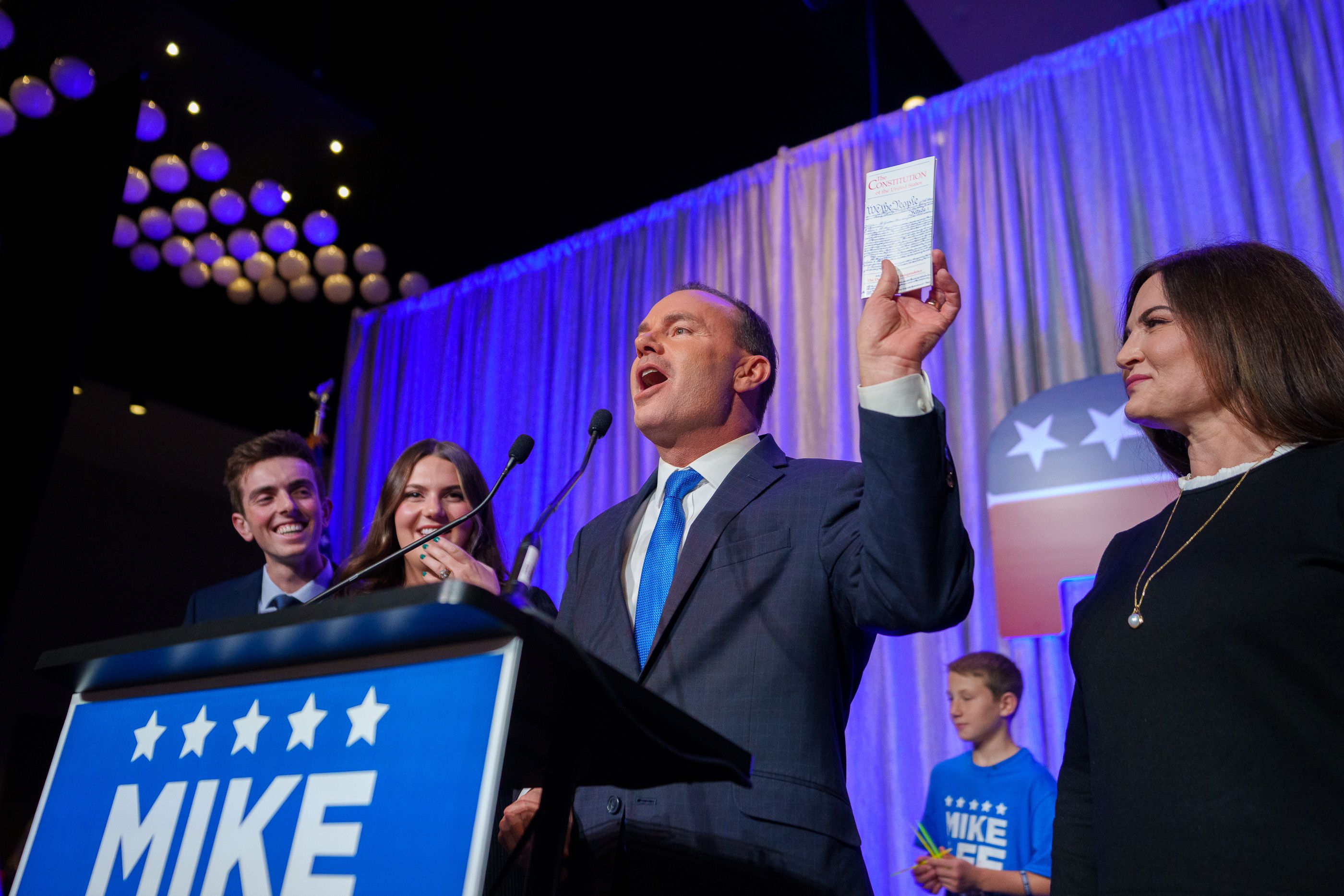 The LDS Church supported the Respect for Marriage Act after an amendment was added that provided some exceptions for religious institutions.

(Trent Nelson | The Salt Lake Tribune) Senator Mike Lee delivers his victory speech at the Utah Republican Party election night party at the Hyatt Regency on Tuesday, November 8, 2022 in Salt Lake City. On Tuesday, November 29, Lee voted against the Respect for Marriage Act after an amendment he had proposed was rejected. The same-sex marriage bill passed the Seante, with Utah Senator Mitt Romney voting in favor of the bill, which will now go before the US House of Representatives.

The right for same-sex couples to marry has moved one step closer to becoming federal law after a bipartisan group of US senators passed the Respect for Marriage Act on Tuesday.

The Respect for Marriage Act passed the Senate by a vote of 61 to 36. Utah’s GOP senators split their vote Tuesday, with Sen. Mitt Romney voting in favor of the bill and Sen. Mike Lee voting against. The bill goes back to the US House of Representatives, allowing a Senate-added religious-exemption amendment to be voted on in the final weeks of Congress’ lame duck session.

The bipartisan support in the Senate came after lawmakers added an amendment to the House bill to provide exclusions for religious organizations, meaning these groups “are not required to provide services, housing, benefits, facilities, goods or privileges to the To provide celebration or celebration of a marriage,” the amendment reads.

After adding the amendment, The Church of Jesus Christ of Latter-day Saints offered its support for passage of the law, but added that its doctrine on “marriage between a man and a woman is well known and will remain unchanged.”

Three other amendments, including one by Utah Sen. Mike Lee, were defeated by the Senate on Tuesday. The sponsors of the other two amendments – Sens. James Lankford, R-OK, and Marco Rubio, R-FL – also voted against the bill.

Earlier this month, the bill cleared a procedural hurdle that signaled the bill was on the way to passage. On Nov. 16, a bipartisan majority that included 12 Republicans — including Romney — and all 50 Democrats voted 62 to 37 to begin debate on the bill. The Senate attempted to vote to pass the bill the next day, but later chose to vote on the bill after Thanksgiving.

“This legislation gives reassurance to many LGBTQ Americans and signals that Congress — and I — value and love all of our fellow Americans equally,” he said in the statement.

Lee was one of the biggest of the bill vocal opponents in the Senate, and has repeatedly argued that the draft law’s exemption for religious groups did not go far enough, calling the protection “severely anaemic”. Instead, he says religious freedoms would be guaranteed if an additional amendment that Lee moved inwould be included in the existing bill.

My amendment to the RFMA – which would allow the law to protect both freedom of religion and same-sex marriage – should be passed immediately. I urge my colleagues to oppose the RFMA unless, or until, this happens. https://t.co/hQsAdf9y5Y

Ahead of Tuesday’s vote, Lee took the floor in the Senate — as he did twice against the current law on Nov. 17 — again arguing that the law does not adequately protect faith groups and that senators should support his amendment.

Current religious exemption states that groups are under no obligation to provide services, goods, or accommodation to same-sex couples. It also says that a refusal to provide such services “does not create a civil claim or cause of action,” according to the bill.

In an opinion piece published by Fox News Monday morning, Lee claimed the current law would threaten the tax-exempt status of religious groups and adding his amendment should be a “no-brainer.”

“My simple, sensible amendment would prohibit the federal government from taking retaliatory action against any person or group who holds sincere religious beliefs and moral beliefs regarding marriage,” Lee wrote.

Lee’s amendment would have added language to the law that attempted to prevent the federal government from removing the tax-exempt status of religious organizations.

Citing the language of the amendment, Durbin said nothing in the law: “shall be construed to reduce or nullify any freedom of religion or protection of conscience otherwise available to an individual or organization under the United States Constitution or federal law.”

Lee’s amendment, which required 60 votes, was defeated by a vote of 48 to 49 before the bill passed.

With its passage, the Respect for Marriage Act will head back to the House of Representatives, where it must pass with the new Senate amendment before it can go to President Joe Biden’s desk.

After the vote, Lee released a statement on Twitter The passage is a “disheartening development in our country’s turbulent history of protecting the free exercise of religion”.

“While I am disappointed that my amendment was not included, I remain committed to upholding the religious freedoms enshrined in our Constitution for all Americans,” Lee said in a statement.

“I proudly voted to codify these vitally important protections in July, and I look forward to voting again for this legislation,” Stewart told The Salt Lake Tribune earlier this month.