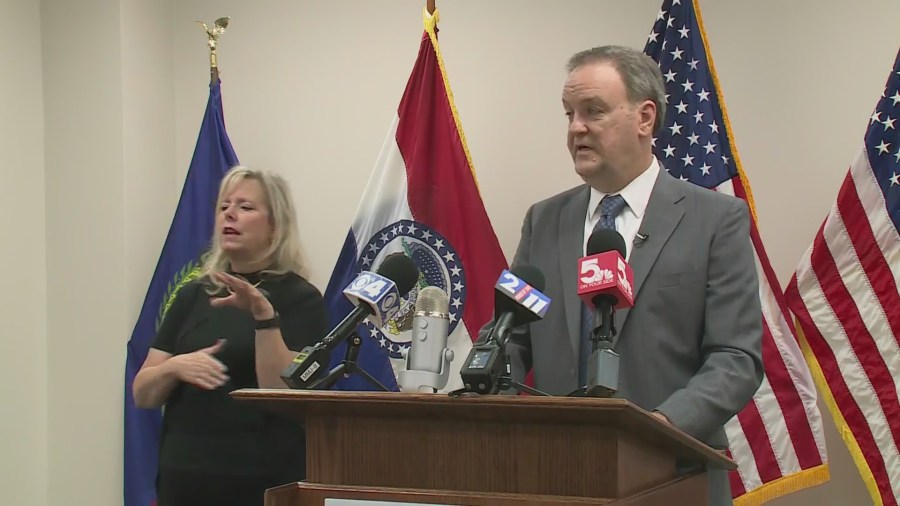 CLAYTON, Mo. — St. Louis County chief executive Sam Page held a news conference Wednesday unveiling federal funding for projects in St. Louis County, and he also addressed the sextape and the resignation of his former chief of staff. After the press conference, however, details became known in a surprising appearance.

“Do you really believe that? Do you really think the precinct didn’t say what videotape?” Fitch asked. ‘What’s on the videotape? Where did that happen?”

He was responding minutes earlier to Page’s responses to the sex tape that led to his former chief of staff’s resignation. Calvin Harris had issued a resignation letter through the office last week citing family reasons.

“The Highway Patrol came up to the ninth floor to see Calvin Harris and as soon as they left I asked Cal what was going on,” Page said. “He told me there was a video and he was quitting.”

“That is his statement. That’s not what I’m saying,” he said.

Harder also addressed counter-allegations against him when he confirmed he received the video from Missouri Republican Representative Shamed Dogan, who will run for county executive office this fall.


“It wasn’t passed around like popcorn. This has been handled with the utmost care,” said Harder. “That’s why we handed it over to the police. There could be a crime here and we don’t want to do anything to get in the way of this investigation.”

He said Rep. Dogan, who received the video from an anonymous concerned citizen, then sent it to him because Harder is his council representative and also chairs the ethics committee. Harder then consulted Fitch.

“That was the right way to deal with it,” Fitch said. “As soon as Councilor Harder brought it to me and said, ‘Hey, I have this video, I don’t know what to do with it.’ I said this may be a crime sign, you must give it to the police.

Jane Dueker, who is running against Page in the Aug. 2 Democratic primary, said she wasn’t surprised when Page’s Republican critics surfaced.

“There are Democrats and Republicans all lining up to say enough is enough,” Dueker said.

She said she was struck by Page’s admission that he always knew the real reason Harris resigned.

During the press conference, Page said he asked for patience while they await prosecution results.

“We’ll have to wait for the current investigation to tell us what happened,” Page said. “This is an incident between my former employee and the Highway Patrol.”

https://fox2now.com/news/fox-files/sam-page-acknowledges-he-always-knew-why-his-chief-of-staff-resigned/ Sam Page admits he knew why his chief of staff resigned