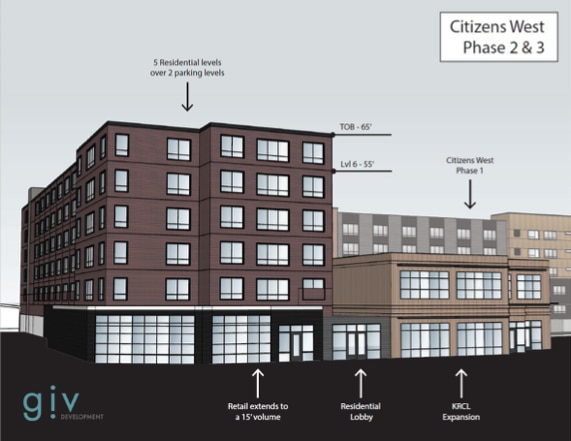 These loans show our housing policy is working, says one councillor.

(Giv Development, via Salt Lake City) A depiction of Citizens West, an affordable housing development being proposed at 509 W. 300 North in Salt Lake City. It was one of eight projects approved by the city’s Soft Loan Redevelopment Agency.

Salt Lake City will provide $8.36 million in soft loans to developers of eight new housing projects that will include a significant portion of rent-subsidized housing.

This is the last round of money the city’s redevelopment agency has offered at least annually since around 2016 to stimulate the construction of more affordable homes by providing so-called gap financing and contributing a significant portion of total lending.

With Tuesday’s approval by the city council, in its role as regulator of the RDA, loans ranging from $280,000 to $1.825 million with reduced interest rates and 40-year terms will be used to support the construction of up to 888 new units.

These will range from studios to four-bedroom apartments, according to the developers, with only eight of the units being let at market rates.

The projects are spread across the city, west and east of Interstate 15. Two will involve the conversion of old buildings for new uses, and several others will provide future tenants with proximity to local transportation.

Nearly 438 of the homes will be affordable to residents earning less than 40% of the area’s median income, which is defined as extremely affordable, according to the RDA review. Another 278 would be moderately affordable and accessible to those whose incomes are between 40% and 60% of the regional median.

About 168 will be three- and four-bedroom units, a type of affordable housing that’s said to be in short supply as officials try to attract more families as the city’s population grows. The RDA recently changed its rules for reviewing loan applications to give higher priority to family housing and highly affordable units.

Six of the eight projects funded on Tuesday are said to include both. Several Council members marveled that their recent move had led to these results.

“It actually worked,” outgoing RDA chair Councilor Ana Valdemoros said of the prospect of more family housing. “I’m impressed and excited about what we’ve been able to achieve with our policies.”

However, Valdemoros noted that none of the latest projects are in the downtown area she represents, where the need for rent-subsidized family housing is particularly acute.

The RDA originally had $6 million for this year’s discount loan, which was offered at 1% and 2% interest rates, but a previous loan recipient funded by the RDA in 2021 returned the money and wagered another 2, $36 million free.

Approved for funding on Tuesday:

• Two phases of victory heights, 1060 E. 100 South, with loans of $1.865 million and $280,000, respectively. Salt Lake City developers from BCG Holdings are proposing to construct up to 88 apartments in two phases in an adaptive repurposing of the former Alpine Medical Group building for a project worth approximately $33.6 million.

• Atkinson stacks, 543 S. 500 West, with a $500,000 loan to developer HAME, or Housing Assistance Management Enterprise, another name for the Salt Lake City Housing Authority. The agency is proposing the construction of 114 studio units to be reserved for disabled and vulnerable residents. The project will cost about $29.8 million.

• Book Cliff Lodge, 1159 S. West Temple, where HAME also plans to build 55 one- and three-bedroom units primarily for veterans and the homeless. It is getting $540,000 this round after a previous $1 million RDA loan. The price of the project will be around $15.4 million.

• Citizen West 2 and Citizen West 3, two phases of work being undertaken at 509 W. 300 North by Giv Development with loans of $1.85 million and $1.2 million, respectively. The first tier has 50 units and the second 30, with portions of both being earmarked for formerly homeless, disabled residents and refugees. Together, the two phases will cost approximately $36 million.

• Ville 1659, at 1659 W. North Temple, featuring 197 studio apartments to be built by Ville Property Management in a repurposing of a former motel. The loan is $1.825 million for a $18.25 million project. Housing units are restricted to renters earning no more than 30% of the area’s median income.