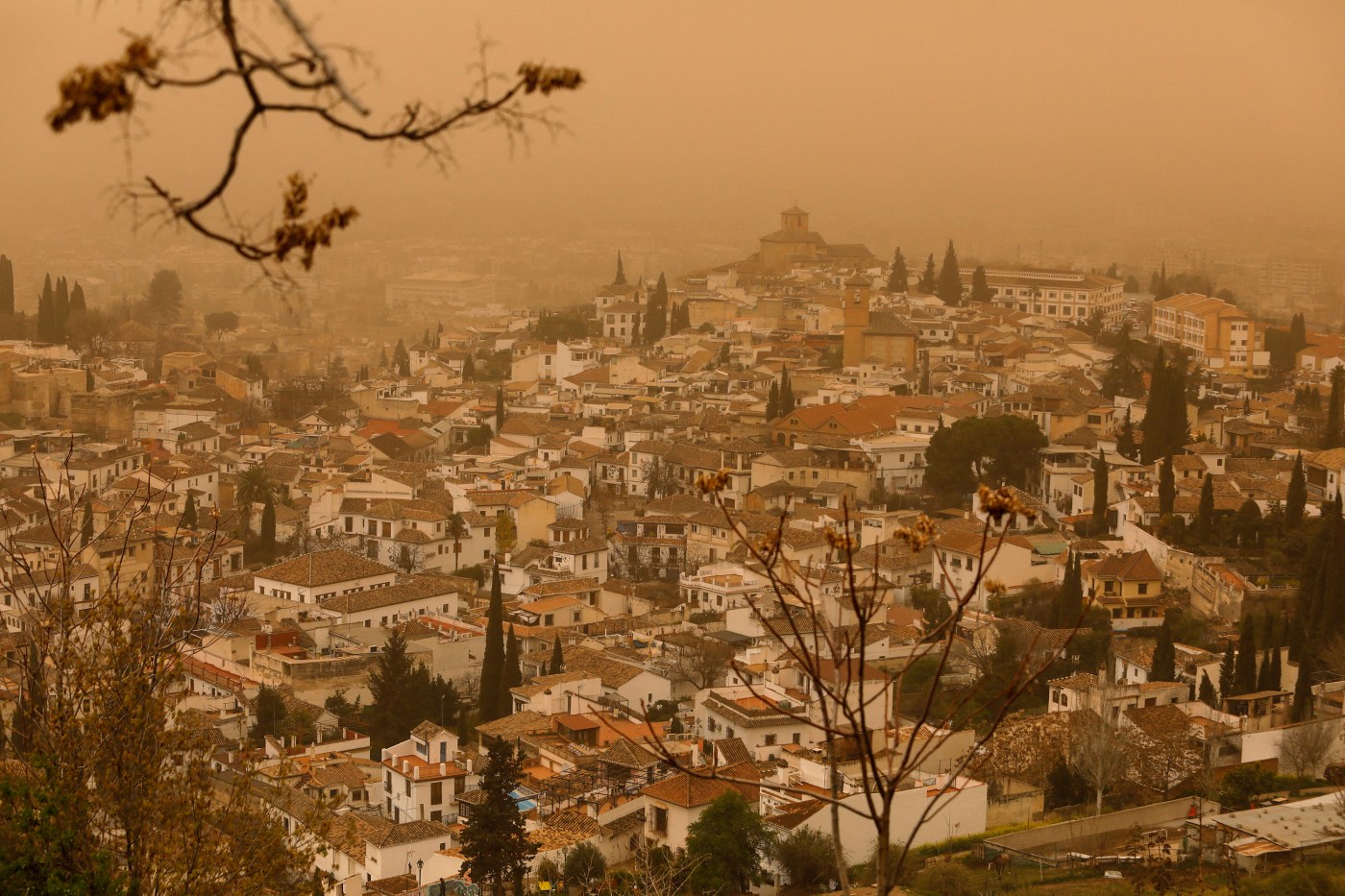 Ski resorts that look like deserts, skies are hues of bright orange, and air quality is five times worse than ideal conditions all have one thing in common: Saharan dust, which is expected to worsen over western and central Europe, even bringing ‘blood rain’. ”

Storm Celia’s strong winds off the north-west coast of Africa picked up dust from the Sahara and threw it into the atmosphere. The southerly winds then blew the dust northward into Europe, creating haunting scenes across the region.

A video posted by the World Meteorological Organization (WMO) shows the eerie scene at a ski resort in Spain, where the snow looks like sand and the sky emits a brilliant orange glow.

The WMO also released a photo from Switzerland showing the snow-capped mountains appearing a rusty shade of orange, which is a sharp contrast to the pristine white snow typical of the region.

Europe can expect brilliant sunsets as the dust particles scatter the sun’s rays.

Stunning orange and red skies can be expected as the sun rises and sets, with limited visibility and hazy skies expected throughout the day.

With enough dust in the air to change the hues of natural landscapes across Western Europe, there are obviously air quality concerns too.

Spain, France and Portugal are particularly at risk of reducing air quality due to the highest amounts of dust from the cloud.

On Tuesday, the European Environment Agency measured dust levels in Spain five times the European Union-recommended air quality threshold, according to Copernicus, the EU’s Earth observation programme. Even today, the air quality in the region is poor.

“Air quality is considered vital to human health, as high concentrations of dust can cause respiratory health effects for everyone in the affected regions and contribute to air pollution from local sources of particulate matter,” explains Copernicus.

Reduced air quality makes people with respiratory conditions like asthma particularly vulnerable over the next few days as air quality continues to decline.

What goes up must come down again

Later in the week, Storm Celia is expected to bring showers across much of western Europe, with heavy rain expected in southeastern Spain. This chance for greater rainfall brings the potential for “blood rain” to parts of Spain as the rain mixes with the high concentration of dust.

“It is understood that blood rain occurs when relatively high concentrations of red-colored dust or particles are mixed into the rain, giving it a red appearance as it falls,” the UK Met Office said.

As the rain falls through the atmosphere, it captures the dust particles that are in the air, causing dust deposits to fall and cover cars, homes, and roads.

With more dust reaching western and central Europe by the end of the week, there will be plenty of dust in the atmosphere for rain to bring to the surface.

Once the dust settles, Europe should expect the dust to clear early next week, welcoming back blue skies and improved air quality.

Saharan dust clouds are not an uncommon phenomenon in Europe

Dust storms are a well-known event in the world of meteorology, especially in dry areas. They are usually caused by storm systems moving into an area where the strong winds can lift dust over a large region, the WMO notes.

We’ll likely see more of these events in the near future. Climate change could worsen the transport of Saharan dust to Europe as wind and precipitation patterns change as a result of land and ocean warming.

Research has shown that widespread desertification in North Africa and stronger winds over the Mediterranean could make these dust events more intense.