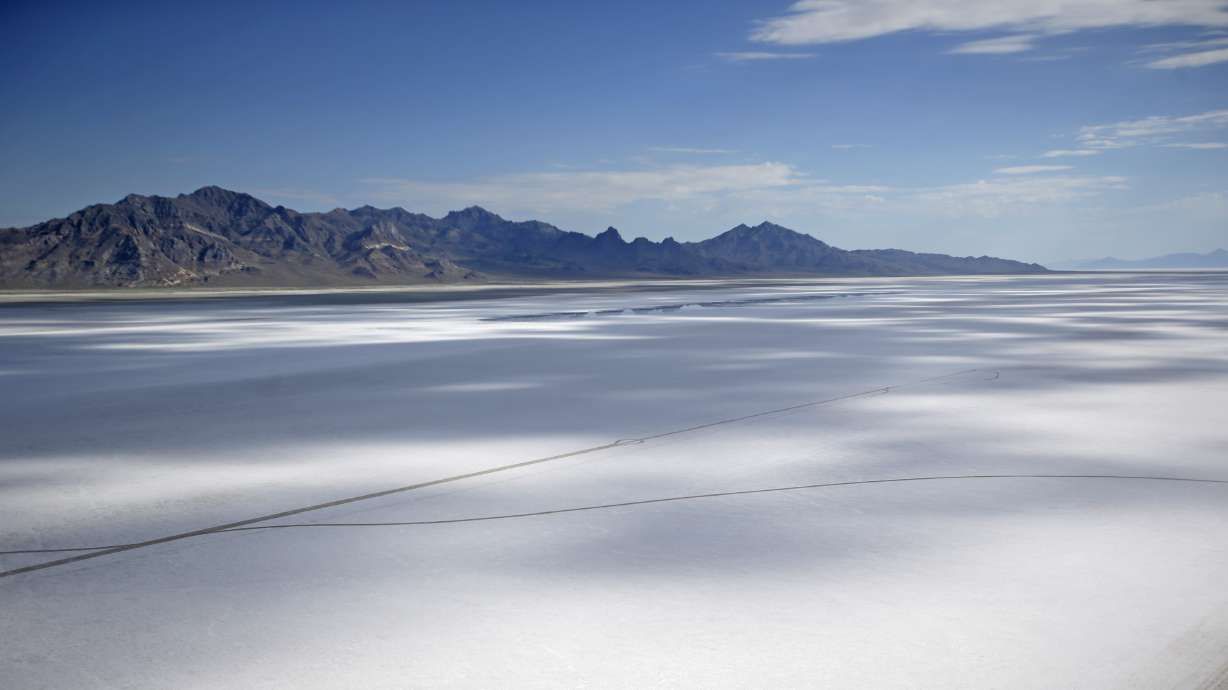 Daron Duke is fascinated by an image he projected onto a screen that he shared with curious archaeologists and prehistoric enthusiasts.

There are two images in northwestern Utah: Blue Lake, south of Wendover on the Utah-Nevada border, and the surrounding desert. One is a relatively small wetland, while the other looks like it could have come from the lunar surface. This, he says, essentially captures the vast difference of about 10,000 years in what is now Utah’s western desert, though it’s difficult to really imagine what kind of place the western desert once was.

“Imagine more plants, more cattails, rushes (and) willows, spreading all over the area,” said Duke, a Nevada-based director of the Far Western Anthropological Research Group, during an online event hosted by the Utah State Historic Preservation Office hosted on Wednesday.

As the second photo shows, the entire western desert is now the exact opposite of what the area once was. The planet warmed as it exited the Pleistocene, and Lake Bonneville receded into what is now the Great Salt Lake. And as the Great Salt Lake now dries to the lowest point in its recorded history, there’s much more lunar landscape to explore.

While many conservation experts, lawmakers, and others focus on the demise of the Great Salt Lake, Duke continues to explore the “lost oasis,” the Western Desert. His studies provide clues that help historians understand what the area once looked like and how it was used at the end of the Pleistocene, which is roughly the same period when human activity began in modern-day Utah.

Most of what is now considered the Great Basin is massive—covering most of the area west of the Rocky Mountains and east of the Sierra Nevada mountain ranges—reaching south to the Mojave Desert and north to present-day Oregon. These areas are mostly desert today, but were once a vast array of thriving lakes, rivers and wetlands.

The section near old Lake Bonneville was no exception. When the prehistoric lake began to recede around 14,000 or 15,000 years ago, there was still plenty of water left to make it a productive habitat because temperatures were cool enough that the water didn’t evaporate as much as it does today.

“For the nothingness it is now, the contrast is that not only would it have been an attractive wetland for people and animals and everything else – just for life in general, it would be the largest in the entire Great Basin and the entire desert.” been to (space in) the West,” Duke said. “It’s creating a freshwater wetland, and it looks like that’s what attracted people.”

So he’s not surprised — though it may be a coincidence — that some of the earlier evidence of human life in Utah, dating back at least 13,000 years, was found in the northwest corner of the state.

Artifacts include Clovis points and other items that appear to be related to hunting tools, although that’s still more of a theory. One artifact found in the western desert even contained elephant antiserum, which Duke says suggests mammoths once roamed the land — and were likely hunted by the earliest human inhabitants.

However, his work is focused on what is known as the Wishbone Site, located on US Air Force land about 30 miles south of Interstate 80 in Tooele County. The barren landscape is close to what would once have been the edge of the wetlands.

Archaeologists were drawn to the site after finding charcoal and bone fragments of waterfowl eroded from the ground about a decade ago. It was a unique find because the mix of wind, salty land and humidity beneath the desert can quickly destroy prehistoric evidence; however, it can also preserve the past if the conditions are right.

The artifacts collected turned out to be burned willow wood, as well as bones, waterfowl gastrolites, fragments of prehistoric tools and tobacco seeds dating back 12,300 years. The latter of these finds appears to have been cultivated on land when this was possible; it is also the earliest known human use of tobacco anywhere in North and South America.

All of this helps archaeologists figure out how the land was used thousands of years ago when it was habitable.

“It just gives you a glimpse of the people — I mean, that’s a campfire scene that we get here (with) all the little bits of what’s going on out here,” explains Duke. “(It’s) a fireside activity, eating ducks… and then enjoying tobacco.”

Subsequent studies of the area have helped determine the various plants that once grew on the land, such as: Archaeologists also plan to dig elsewhere in the area in the near future.

But the prehistoric windows that experts have found in the western desert are only about 3,000 years old and close 10,000 years ago. Human hunting tools also appear to have dwindled over this span, suggesting that the animals that hunted humans became extinct. The end of the window is also about when scientists believe the megafauna went extinct.

The end of the Pleistocene came as the Earth began to shift into a warming period known as the Holocene Epoch. Duke essentially refers to this as “Global Warming 1.0” as the era drastically changed the region’s climate. The Great Basin was slowly and surely becoming a desert with little if any evidence that it was once a thriving wetland.

This also led to a change in human behavior. What began as “high mobility” led to a more “localized” civilization, Duke says.

This is evident in the range of obsidian-based prehistoric tools. The range of the oldest obsidian tools stretches all over the west, from present-day Beaver in southern Utah to northeastern Idaho and west to northern Nevada. Similar tools dating back 9,000 years ago, found primarily in areas closest to the original source of obsidian in Utah, are shrinking in range.

“We have this to tell ourselves that there is a great momentum going on. When you get out of the Ice Age … things start to kind of dry up in other areas of the Great Basin,” Duke said. “They assumed long, mobile ranges and probably a much sparser population in the landscape. … It’s like the faucet went out out here and the people changed.”

Artifacts in Utah indicate that people began moving away from the wetlands and into the highlands, such as Danger Cave near Wendover. New innovations, such as pickleweed seed milling, appear as the drying up of ancient wetlands continues.

This change is also when artifacts of life near Utah Lake begin to accumulate. It is one of the places where people and animals immigrated.

Elizabeth Hora, an archaeologist with the Utah State Historic Preservation Office, presented her finds of the region where freshwater remained in March, calling the wetlands a “prehistoric grocery store.” Her research on artifacts also indicates that people became even more localized as the Great Basin continued to dry up.

The Great Basin region is only drying up from the 20-year western mega-drought, believed to be the worst in 1,200 years. It has caused the Great Salt Lake and other western waters to dry up at an alarming rate as global temperatures soar to new record highs.

Does that make the end of the western desert wetlands more relevant today?

It’s difficult to understand the human connection of prehistoric human life to modern times because thousands of years ago there were fewer people with very different lifestyles, Hora said. Furthermore, most of what is known about prehistoric life is the result of putting together fragments of the past, making it impossible to know how it really changed human thinking.

Nonetheless, the story of the lost oasis seems to show a connection to contemporary patterns, in the sense that people and animals follow the water. Its availability and scarcity transform behaviors and lifestyles, leading to adaptation and innovation.

It remains to be seen what the ultimate impact of the ongoing mega-drought will be, beyond the fact that it’s already changing the way people in the West and the Great Salt Lake use water.

“In a desert, it’s important when the water’s gone,” says Duke. “It was important to these people in the past and it is important now. They couldn’t stop it. Can we? I do not know.”

This article is published by the Great Salt Lake Collaborative, a solutions journalism initiative that brings together news, education, and media organizations to educate people about the plight of the Great Salt Lake — and what can be done to help make a difference before it’s too late. Read all of our stories below greatsaltlakenews.org

Sonos stock soars as demand for its speakers pays dividends