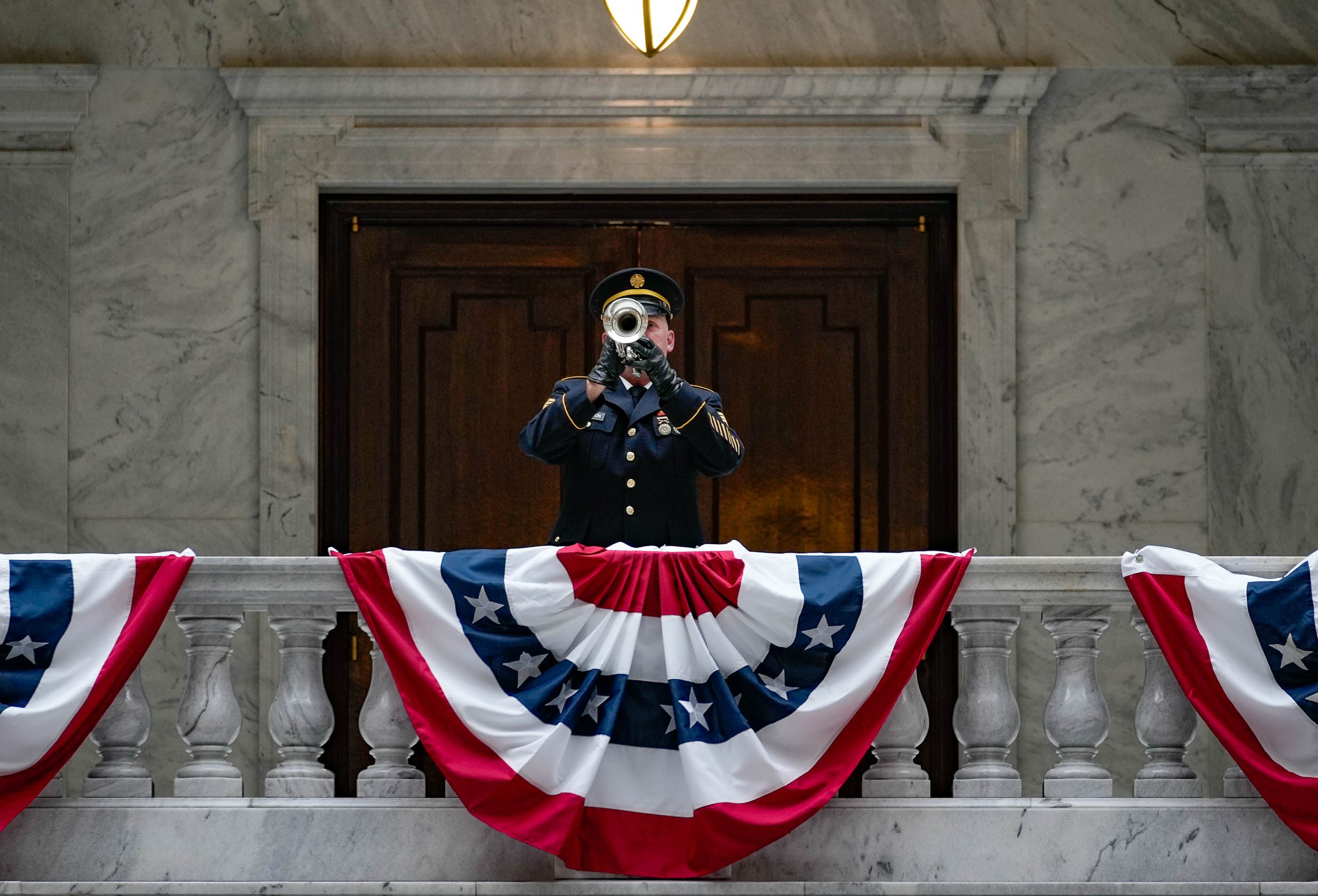 Since World War I, nearly 3,000 Utahns have been killed serving in the United States Armed Forces

Memorial Day is often a day of barbecues, fun and family gatherings, Gov. Spencer Cox said Monday at the Utah Capitol. But he liked the morning rain, he said, not just because of the drought the state is experiencing, but because “a day like today helps us really take a step back and remind ourselves what it’s all about.”

Cox spoke at a Memorial Day ceremony organized by the Utah Department of Veterans and Military Affairs and attended by dozens of Utahns. The event, which included remarks from Utah Senator Mitt Romney, was brief but meaningful.

“I thought it was very dignified and respectful,” Terry Rogerson, a Vietnam War veteran, told a Salt Lake Tribune reporter. “It greatly honored the fallen soldiers of America and especially Utah.”

(Francisco Kjolseth | The Salt Lake Tribune) Vietnam veteran David Howland of Taylorsville joins other visitors at his first memorial service at the Utah Capitol on Monday, May 30, 2022.

Another Vietnam veteran, David Howland of Taylorsville, had never attended a Memorial Day ceremony at the Capitol before Monday. His wife, Sherry Howland, said that his PTSD can make it difficult for him to be around other veterans.

“But he still wants to do it and represent the Vietnam War because it’s been sealed off and unrecognized for so long,” she said.

The ceremony was supposed to take place outside on the Capitol steps, but the wet, cool weather drew crowds inside the rotunda. As they placed their right hand over their heart for the American flag, people also held umbrellas and listened somberly as the Utah National Guard Choir sang the national anthem.

After the choir’s performance echoed through the expansive space, Cox said the acoustics in the circular rotunda made it “a terrible place to give a speech” but “an amazing place to sing.”

Since World War I, nearly 3,000 Utahns have been killed serving in the United States Armed Forces, he said, “and today we hope to show them, their families and their descendants that we will never forget them.”

The Capitol ceremony was one of many Memorial Day events held across the state on Monday to honor fallen veterans, Cox said, “and yet we continue to fail in our efforts to pay tribute.”

“So today I’m going to ask you not to try to remember what I said,” the governor continued. “Pay attention to how you are feeling today. I ask that you carry that respect and gratitude with you on this special day and carry it with you tomorrow, the next day and the day after.”

During Romney’s speech, the senator said, “We are all very fortunate to live in Utah. … This fullness of life is our gratitude to the men and women who won our freedom, who protect us from oppressors, and who defend our nation from threats here and abroad.” After that, the participants crowded around him, around themselves to be photographed.

Romney didn’t speak about politics at the U.S. Capitol ceremony, but he spoke to reporters at the Utah Olympic Oval on Friday about keeping young people from getting their hands on guns.

To conclude Monday’s event, the Utah National Guard staged a 21-gun salute on the Capitol lawn, smoke from each blast appearing to mix with the gray clouds. The American flag outside and at all state facilities flew at half-staff until noon in honor of Memorial Day, as directed by Cox.

A wreath and flag will remain in the rotunda throughout Memorial Day.