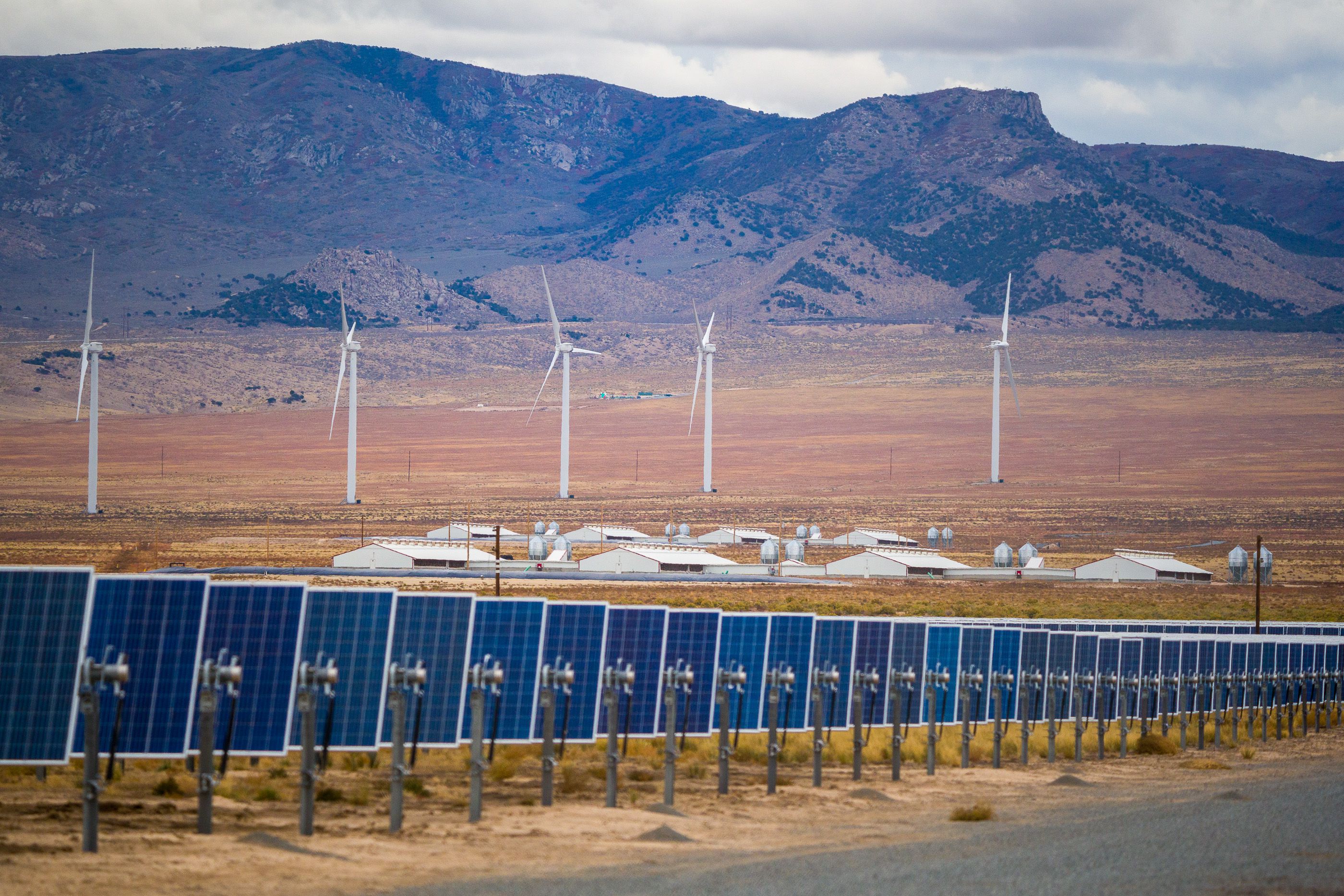 (Trent Nelson | The Salt Lake Tribune) Wind turbines, solar panels and hog farms north of Milford on Tuesday, October 5, 2021. Pacificorp, the parent company of Utah’s largest electric utility, is teaming up with the California utility to create a new market, where utility companies in the West can buy and sell electricity.

It’s all happening now, and two of the largest electric utilities in the western states want to promote more of it.

Pacificorp, parent company of Rocky Mountain Power and electric utility in six states, has partnered with the California Independent System Operator (CAISO) to set up the “Extended Day-Ahead Market,” where utilities in 11 states will sell their surplus power, or surplus power can buy from others as needed to supply their customers.

The market builds on the Western Energy Imbalance Market, also established in 2014 by Pacificorp and CAISO. The Imbalance Market is a real-time resource that allows utilities to buy and sell their electricity every 5 minutes, allowing them to adjust when their customers demand more or less than expected. About 5% of the electricity in the west comes through this imbalance market.

“Every system has quirks and inefficiencies,” said Scott Bolton, Pacificorp’s senior vice president of transmission and market development. By pooling everyone’s resources in a market, one utility’s inefficiency can become another’s valuable resource.

In particular, this pooling of resources allows for greater and better use of renewable sources like wind and solar, which vary by climate, Bolton said. “The idea is to reduce fuels” when sources other than fuels are available, he said.

According to Pacificorp and CAISO, the imbalance market has saved customers $2 billion since its inception, including $500 million for Pacificorp’s customers alone. Pacificorp powers approximately 80% of Utah residents.

“We sell Northwest Hydro in the spring and early summer runoff months. …. We sell thermal resources (coal power) out of Utah,” Bolton said, when wind and sun produce less.

The day-ahead market will essentially make this imbalance market proactive rather than reactive. Utilities in the west can buy and sell electricity a day in advance, allowing them to plan their resources based on the next day’s weather forecast and other factors such as power plant maintenance.

Instead of 5% of power bought through the imbalance market, 80% or more of western power could be bought and sold through the day-ahead market, Bolton said.

The day-ahead market is characterized by what it is not: a regional broadcast organization. In an RTO, power sources and transmission lines are controlled by a single entity.

Pacificorp and CAISO proposed setting up an RTO back in 2016, but faced political opposition from then-Utah Gov. Gary Herbert and others who thought it would give California too much control over Utah’s power.

Unlike an RTO, the day-ahead market does not require approval from the Utah Public Service Commission, which regulates electric utilities in the state. But it still allows for much of the efficiencies that would come with an RTO.

Michele Beck, whose Office of Consumer Services champions Utah electricity customers, believes the potential savings for consumers may not be as great as the project’s advocates, but she still sees a benefit.

“I think studies and experience show that the day-ahead market will provide additional benefits that customers are already getting from the energy imbalance market,” she said.

Utah Associated Municipal Power Systems, which represents most of Utah’s power customers who aren’t Rocky Mountain customers, isn’t currently participating in the imbalance market, but spokesman LaVarr Webb said UAMPS could still see impact from the day-ahead market because of what Pacificorp manages the net in Utah.

“Currently, it is believed that the vast majority of the impacts of UAMPS operations are primarily administrative,” Webb said. “Nonetheless, UAMPS has worked with external consultants to conduct a full analysis of what this means for UAMPS, not only operational implications, but also opportunities for UAMPS to become a participant.”

Pacificorp also joins the Western Resource Adequacy Program, an attempt to standardize energy planning so utilities have a common understanding.

Contrary to the plan for a regional transmission organization, no political opposition to the day-ahead market has emerged, and clean energy groups have advocated in favor of it.

“We are pleased that this final CAISO proposal will be advanced with other options for day-ahead energy markets, all of which would help maximize transmission and integrate lower-cost clean energy resources into the grid, and we look forward to more.” Work on regional expansion energy markets and transmission efficiency,” said Heidi Ratz, senior manager of market and policy innovation at the Clean Energy Buyers Association.

https://www.sltrib.com/renewable-energy/2022/12/14/pacificorp-california-power/ Pacificcorp and the California energy giant are taking another step to transform the western power grid