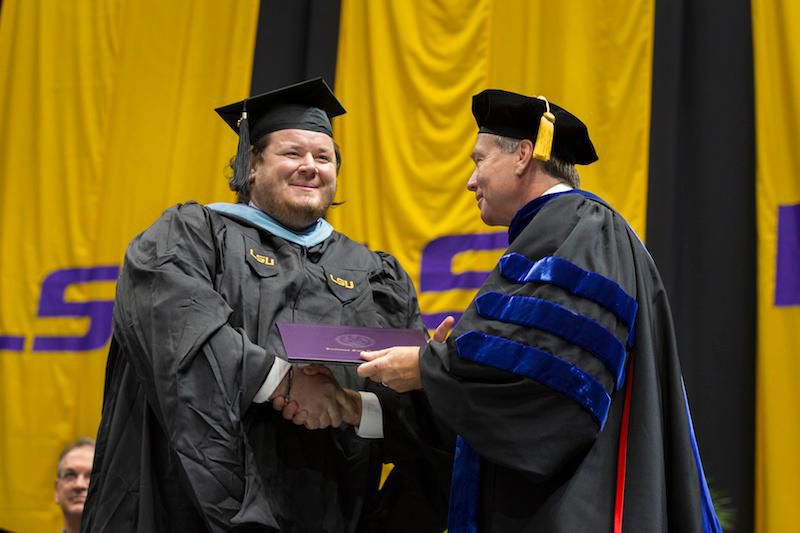 St George • Now that Matt Devore has finally found a home, the director of student services at Utah Tech University is helping freshmen, many of whom are struggling to feel at home.

At first glance, Devore and struggling students seem to be polar opposites. While a student at Utah Tech, the accomplished academic was on the Dean’s List three times, on the President’s List once, and served as the school’s student body president during his senior year.

Since graduating from the school with a Bachelors in Integrated Studies in 2016, Devore has earned an online Masters in College Administration from Louisiana State University and will soon begin her PhD.

Appearance isn’t all it seems, however. The reality is that few know the value and stability a home can bring better than Devore, who was born in Phoenix and was homeless for much of his formative years, sometimes begging for money and living outside with his mother and sister of the car lived.

“My mother fought with some [drug] Addiction and that addiction dictated her life, which in turn dictated my life because I was her child,” Devore recalled. “It got to the point where we didn’t have a vehicle and we went from hotel to hotel asking for money to pay for food and [shelter].”

To turn things around, the single family moved to Mesquite, Nevada, where Devore was in fifth grade. Unfortunately, old habits are hard to break, and new locations don’t always mean a fresh start.

“There was no job, no money, nothing,” says Devore. “It was just doing what you can to survive… And for that [my mom], Drugs were a powerful thing. That was her big motivation.”

Fortunately, since his mother was unable to meet the challenge of overcoming addiction, members of the community stepped in to help Devore. When he was 15 and once again without an apartment, Devore persuaded a friend’s mother and sister to put him up in their house for a week until an apartment was ready. In reality, there was no apartment, and his temporary accommodation became a permanent home apart from his mother until he graduated from Virgin Valley High School three years later. Other families also lent a helping hand, providing shelter and emotional support.

Still, it was a challenge to complete his freshman year at Utah Tech. Devore did not have a car to commute to work and school or an apartment. Eventually he shared a room with a Mesquite friend at that friend’s sister and friend’s house. When his two friends from Mesquite dropped out that freshman year, Devore’s support system went with him.

He was soon working full-time at Walmart and taking night classes at what was then Dixie State University.

“The only interaction I really had with campus was just going to class, doing homework, going home and going to sleep,” says Devore. “I didn’t want to go to any events.”

By the end of his freshman year, Devore had an 1.8 GPA, was on academic probation, and was told he would have to change course or lose his financial support. From all appearances, it looked like his time at university might be over.

But then fate – or more specifically Del Beatty, the university’s dean of studies at the time – intervened. Devore was filling shelves in Walmart’s toy department when he saw and stopped to speak to Beatty, who advised him to get involved in student government. A friend who was on the student council backed Beatty’s advice.

During his sophomore year, Devore signed on as an unpaid committee member on student administration. It was a volunteer position without a grant. His GPA rose to a 4.0 that semester and he found a sense of purpose and belonging.

“That changed the game for me right there because I found where I fit in and found a home,” says Devore. “And I had 40 new friends because they were [in student government.]”

Jordon Sharp, then Director of Student Involvement & Leadership, recalls urging Devore to decorate the campus during Homecoming Week in a way that would far exceed the efforts of previous years – all in an attempt to give students that to feel more involved in the celebrations. Devore recruited more than 50 students to join him in the endeavor and got to work.

“As soon as I walked onto campus just before returning home, I literally started yelling because he had literally decorated every inch of the campus,” says Sharp. “Everywhere you looked there were decorations, just like I asked. That’s when I saw things take a turn for Matt. That’s when I saw that you could give him a job and something special would happen.”

From there, in his junior year, Matt became Marketing Manager for Student Administration, a scholarship position, and subsequently became President of the Student Union. As Devore’s mentor at the time, Sharp recalls helping the student leader – who had no experience in public speaking – to craft his first major speech on the state of the university. They started filing the speech in the afternoon and finished around midnight.

“He had to have it perfect,” says Sharp. “So here was a guy who had never done anything like this before. But just like decorating the campus, he was willing to find mentors and people who would help him, and then he would just kill himself until he got the job done or needed to be where he needed to be.”

Not only did Devore wow fellow students and faculty, he also impressed Utah Tech President Richard Williams, with whom he frequently interacted on campus as student body president and with whom he still speaks occasionally.

During one of his speeches a few years ago, Williams told students that if they wanted mentoring and university presidents, they should come to him.

“So [Matt] came into my office and said, “I want to be president of Dixie State University one day,” Williams said. “I think he will because he’s on that path.”

For Williams, Devore exemplifies the fact that Utah Tech can and does change lives for the better — that the university can meet students where they are and take them where they want to go academically and professionally.

He won’t get an argument from Devore, for whom life has come full circle. Except now he’s more of a giver than a recipient of student aid. As University Director of Student Services, he oversees 45 peer coaches who meet with freshmen, helping them navigate the college experience and feel more connected to the campus and all that the university has to offer.

As a result of these efforts, the retention rate among first-time and full-time students pursuing a bachelor’s degree at the university has increased from 54% in 2014 to 59% this year. And Devore is excited about the role he and others play in helping students adjust to the academic stage.

More than ever, Utah Tech University feels like home to Devore and his charges.

ALDI celebrates the reopening of the Fenton branch

US trip to China postponed over spy balloon