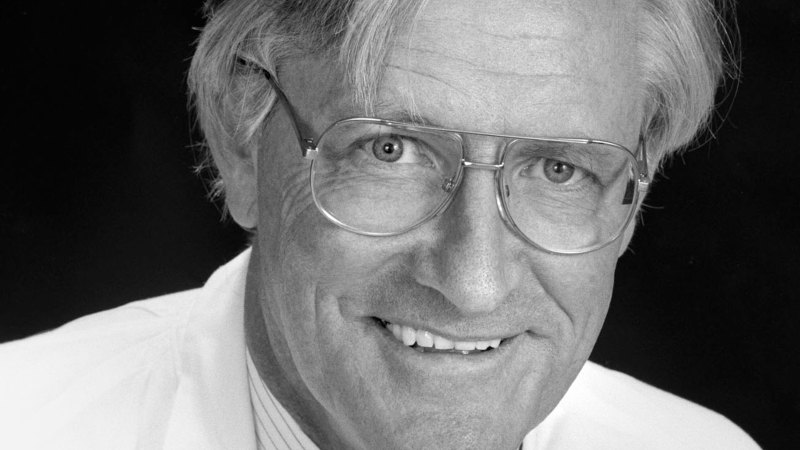 In the years that followed, McLeod worked feverishly; there was never an unproductive hour. He didn’t stop for lunch and got through the day on an apple combined with a steady flow of instant coffee. He said he didn’t have time for lunch – and that eating allowed blood to flow from the brain to the stomach and therefore made the afternoon less productive. He also worked late into the night in his home office, writing, dictating and correcting.

McLeod’s international legacy in neurology is immense. In the late 1960s and early 1970s he co-founded Australia’s first clinical neurophysiology department with John Walsh at the RPAH. They developed new techniques that allowed definitive diagnosis of common neuropathies, and neurologists and other doctors came from all over Australia and New Zealand to learn them. McLeod studied many patients with hereditary neuropathies and carefully created and collected family histories. Using this data, Garth Nicholson, one of McLeod’s protégés, achieved a world first in defining the gene abnormality responsible for the most common genetic neuropathy.

McLeod was one of the first researchers internationally to define a group of severely disabling neuropathies that have been shown to have an autoimmune basis (chronic inflammatory demyelinating polyneuropathy – CIDP). With Professors John Prineas, Pam McCombe and John Pollard, he studied their pathology and detailed clinical, neurophysiological and immunogenic features.

He promoted research into new immunotherapies and his team worked with the Hematology and Immunology departments at the RPAH, introducing plasmapheresis and intravenous immunoglobulin for the first time in Australia, benefiting many patients who would otherwise have been wheelchair bound.

When McLeod was appointed chief of neurology at RPAH, he established specialized departments in stroke, neuropsychology, hearing and balance, molecular neurology, comprehensive epilepsy services, neuromuscular and others. It was a bold plan and he carried it out with distinction. Some of these units are internationally known.

McLeod began to focus his interest on the most common autoimmune neurological disease, multiple sclerosis (MS), and made important contributions to its epidemiology and treatment. With Professor Basten he conducted the first clinical trials of immunotherapy in MS in Australia, first with transfer factor and then with beta-interferon. Subsequent internationally controlled immunotherapy studies that build on this work have changed the course of multiple sclerosis for many people.

In 1993, McLeod, in partnership with the MS Society of NSW, set up a weekly clinic for the assessment and treatment of patients suspected of having MS, offering physical therapy and other support services, available free of charge to all patients throughout NSW. This clinic continues and is attended by many people from rural centers where specialized medical services are more difficult to obtain.

In addition to his demanding work at the forefront of research, McLeod worked to develop the necessary infrastructure to support research and patients affected by MS. He has been actively involved with the Multiple Sclerosis Society of Australia for over 20 years, as a member of the Research Advisory Board, including as Chair and Vice Chair. He was a member of the International Advisory Board of the International Federation of MS Societies. With colleagues at the university, he founded the Nerve Research Foundation to support research into MS and other neurological diseases.

In 1990 McLeod was appointed Chair of the Department of Neuroscience at the RPAH and in 1995 Director of Neuroscience at the Central Sydney Area Health Service. He later became President of the Australian Association of Neurologists. These many appointments reflect only a fraction of Jim McLeod’s service life.

McLeod was an outstanding mentor and an inspiration to a generation of students, neurologists and scientists. He had a kind and generous manner and was referred to as “Gentlemen Jim” by colleagues, patients and students alike. As a manager, his approach was one of rigor combined with tolerance. He created a highly supportive environment in which young researchers could learn and thrive.

We can all learn elements of leadership, but some, like McLeod, were born to lead. He had such a sharp mind that he could define the essential issues in complex issues and situations and was not afraid to take the actions that he believed would make a difference. He would never ask anyone on his team to take responsibility that he would not be willing to take on himself.

McLeod was a man of integrity in his life and work. He never spoke of his many achievements; they did not motivate him but came in abundance, rather a by-product of his academic excellence, sharp mind, dedication and integrity, and in short, strength of character. He spent countless hours helping his peers with promotions and other honors.

The University of Sydney