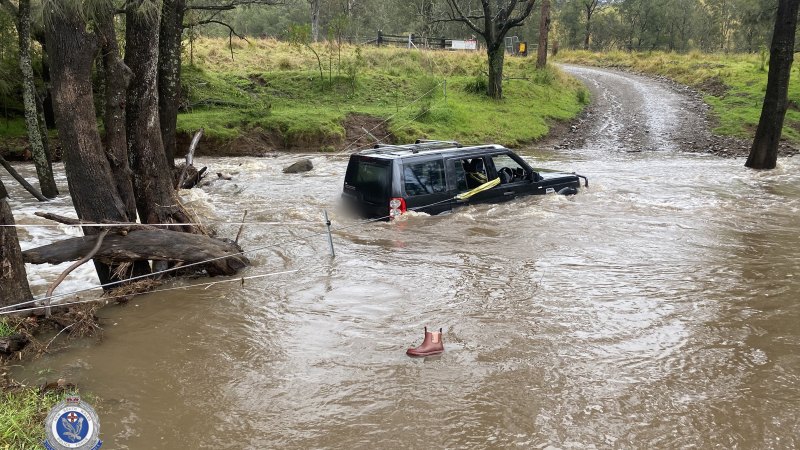 On Thursday, Jane Golding of the Bureau of Meteorology said terrain in the region would only become more saturated in the coming days.

“Almost a few hundred millimeters have fallen in some locations in the last 24 to 36 hours and we are expecting more rain and thunderstorms,” ​​she said.

“We expect areas to see 24-hour totals just over 100 millimeters, but there will be some bullseyes, with some higher totals.”

The extreme weather led to the dramatic rescue of three people from flood waters at Bingleburra near Dungog on Thursday.

Using a rope as a safety line, Senior Police Officer Richard Hansen entered the floodwaters to reach a car that was submerged.

Getting back into the water three times, the policeman managed to bring a four-year-old boy and two women, aged 51 and 47, to safety. They were unharmed but were treated for shock.

At a news conference on Friday morning, Hansen said the “real drama” came after the evening news played the rescue vision, and his wife saw how far he went to save the trio.

“She understands, it’s the nature of the beast,” he said.

Hansen said he positioned a camera on the car to record the rescue so loved ones could see what he was trying to achieve if things went wrong.

The heavy rain also forced a campsite in Helensvale, which is close to the popular Gold Coast theme parks, to be evacuated in the middle of the night.

Earlier this month, the bureau said a third La Nina event was underway in the Pacific Ocean.

The weather event will increase the likelihood of above-average rainfall in eastern and northern Australia in spring and the upcoming summer season.