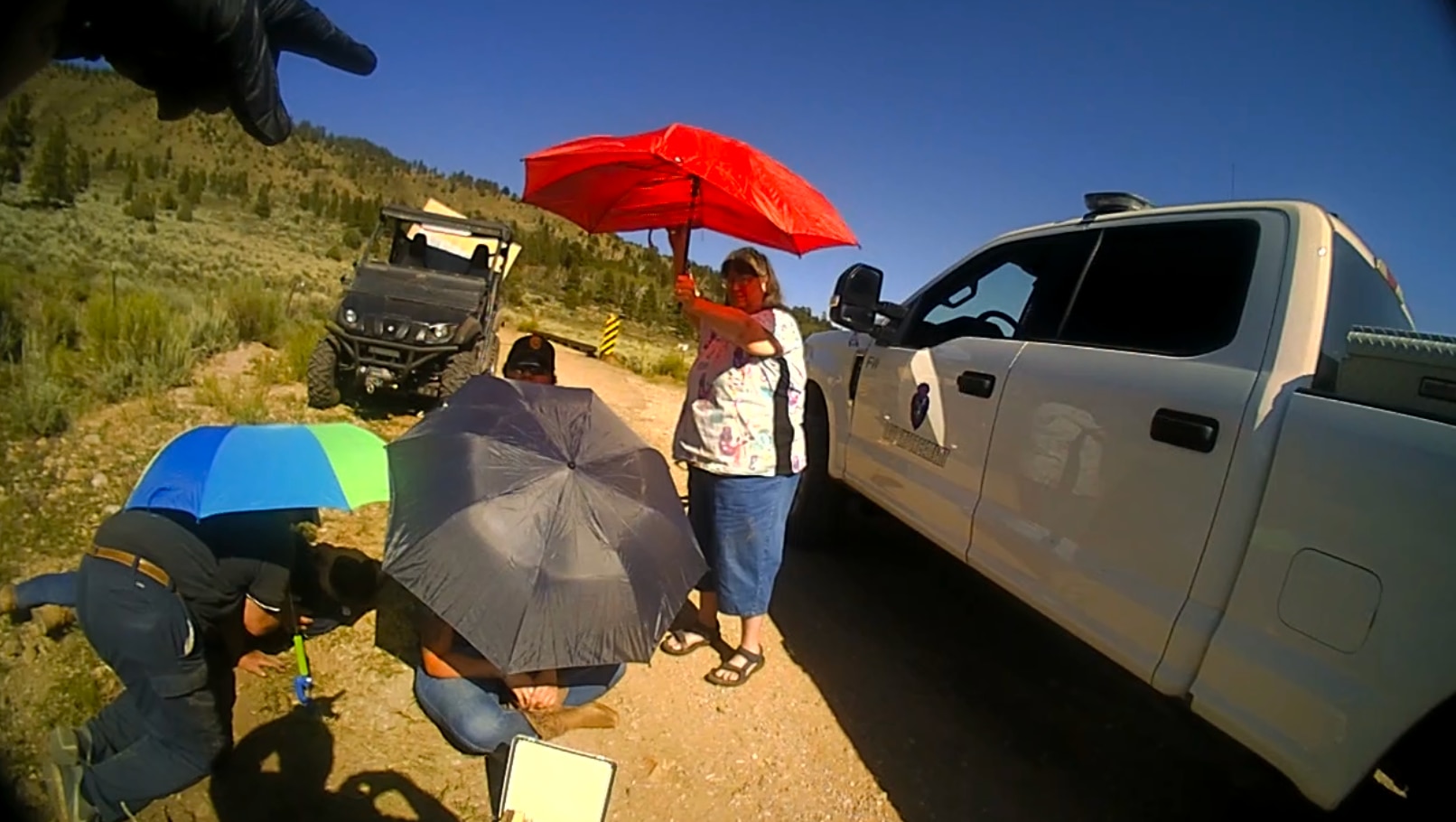 In July, an officer with the Ute Indian Tribe Fish and Wildlife shot two people in the back, police said.

(Duchesne County Sheriff’s Office) Two people provide first aid to two wounded people under the green and black umbrellas near Uinta Canyon in Duchesne County. In the center is the policewoman who reportedly shot the couple. Top left is a Member’s hand pointing at the officer.

Newly released records show what happened immediately after a man and woman were shot and killed by a Ute Indian Tribe Fish and Wildlife officer on July 17 while the couple appeared to be recovering near Uinta Canyon.

Body camera footage and documents offer no context as to what led to the two people being shot or confirmation of whether they were armed, although records suggest they were not. The tribal officer’s name was not released.

Shortly after the shooting, deputies from the Duchesne County Sheriff’s Office were dispatched to the scene on Ute tribal land near Uinta Canyon, north of Neola. The two people – a man and a woman whose names were not released – had been shot dead “following a UTV incident in tribal areas.” It is not clear from the records whether the two knew each other.

The body camera footage was recorded by a Duchesne County assemblyman and was obtained by The Salt Lake Tribune through an open record request. Footage shows the officer encountering five people and three vehicles on a dirt road in an open sagebrush area. Umbrellas are held over the two shot dead.

When the deputy approaches them, the officer says, “Two people. One has a shoulder wound, one on the back of the chest.”

The deputy asks her where the guns are, and she replies, “No. They retreated behind me on a side by side [unintelligible] me on and off. Turned around, come down again, he was shot and she was shot. They got out. Left her on the floor.”

“They were both shot by…” the deputy asks, pointing to the policewoman.

The deputy then requests a medical unit. When the deputy asks where the guns are, the man who was shot replies, “There are no guns.”

“Try not to move, mate,” the male deputy tells the man, assuring him that an ambulance will be arriving soon.

After the wounded man is placed in an ambulance, another officer asks the deputy what happened. The deputy then turns off his body cam.

In the MP’s report on the shooting, also obtained through a public filing request, he writes that the officer “was shot dead along with two suspects.” However, according to an FBI statement released shortly after the shooting, the tribal officer was not injured.

“After the medicine [personnel] After clearing the scene and taking the person to the hospital, I told the officer I wasn’t going to ask her about the incident but wanted to know if she was okay,” the deputy wrote in the report. “The officer said she was fine, a little shaken up.”

The report also states that another officer and his dog searched the crime scene for weapons and found none. According to records, a possible bullet was found in the UTV’s passenger seat.

The man and woman were taken to hospitals. On Thursday, an FBI spokesman said they had no current information on her condition.

The FBI spokesman also gave no further information about the shooting and referred to the ongoing investigation.

The July 17 police shooting was the ninth this year in Utah, according to a database maintained by The Salt Lake Tribune.

The most recent was in American Fork on Wednesday and involved a reported shoplifter. The 29-year-old man ran away from officers, then got into a car with a 5-year-old child in the back seat and drove away.

According to the American Fork Police Department, officers made several attempts to stop the vehicle, but were unsuccessful. The child was later found safely with relatives. The man remained at large as of Thursday evening.

https://www.sltrib.com/news/2022/08/12/new-records-detail-aftermath/ New records describe the aftermath of a Utah tribal officer who shot two people in the back

Scottish football: why this could be a big season for Arbroath | Soccer