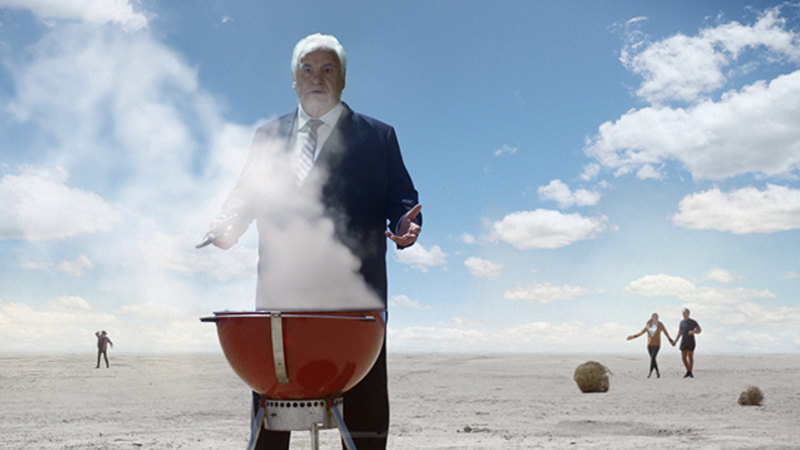 And then in drops Sam Kekovich with a barbecue full of lamb chops. How is that un-Australian someone asks him? “All I said was ‘Enjoy your meal,'” he replies.

It’s a solid 180 for the campaign, which began in 2005 with former Aussie Rules footballer and media personality Kekovich railing against the collapse of Australian values ​​in an alleged Australia Day speech.

“UnAustralianism is everywhere,” he thundered in a style that was both exaggerated and typical of the man. “Their long-haired, cashless dudes indulge their pierced taste buds with all sorts of exotic, foreign, and often vegetarian cuisine. Chicken burger dinners, pizza, a number 42 with rice: this is an absolute disgrace. And people ask why we need the death penalty.”

For the next decade, the gag was repeated, ever more elaborate and always with references to the more egregious episodes of the past year: the GFC in 2009, Mel Gibson’s meltdown in 2011, Shane Warne’s fling with Liz Hurley in 2012. (where Kekovich complained himself that old Warnie “would never have preferred a starlet to a chops, or a tweet to a meal”). In all, the faces were exclusively white, the tone simultaneously expressive and mocking of Anglo-Australian chauvinism.

However, as of 2015, the ads took a turn towards something broader. That was the year Richie Benaud invited some people over for a barbecue. The guest list included Captain Cook, Burke and Wills, Ned Kelly, Don Bradman, Ita Buttrose and of course Kekovich. A fake Bill Lawry was snubbed, as was anyone who wasn’t white.

The following year, Lee Lin Chin directed an ad based on the idea of ​​bringing Australians abroad home for an Australia Day barbecue. It was the first real glimpse of modern Australia.

Finally, in 2017, the campaign embraced the idea of ​​Australia as a truly multicultural nation for the first time. This ad starts with a bunch of tribals on the beach having a barbecue; Among them is Indigenous actress, author and activist Meyne Wyatt. Soon a sailing ship comes into view. It’s the Dutch. Then the British, the French, the Germans, the Italians, Serbs, Indians and more rock.

As a modern ship appears on the horizon, someone shouts “Boat People,” and TV chef and painter Poh Ling Yeow says, “Aren’t we all boat people?”

It is an explicit celebration of the idea of ​​Australia as a nation of immigrants based on an indigenous culture. In the years since we’ve had current ads: political polarization (2018), envy of New Zealand’s cool Prime Minister (2019), obsession with social media (2020), COVID-related border closures (2021), and isolation (2022).

Graeme Yardy, domestic market manager at MLA, points out: “We’ve pretty consistently delivered on the message – it brings people together to eat lamb”.

The latest reading doesn’t mark a complete break from the original position, he says. But he concedes that there was a deliberate attempt to “create controversy” in the older ads.

“Shock and awe were seen as a means of attracting attention,” he says. “But things have evolved. It’s important to us to be up to date, relevant and actually have perspective.”

From this perspective, Australia is a place of great diversity and there is room for people of all beliefs, backgrounds and beliefs – as long as they eat lamb, of course.

Humor is still key to the way the message is delivered, but is he concerned that MLA could be accused of signaling virtue, with its new found position being, in fact, pretty much the most Australian way to be un-Australian be what one could be ?

“It’s not Lamm’s place to tell you what’s Australian or not,” he says. “We are not the referee. Our job is to point out the ridiculousness of calling something un-Australian.”

This might be a bit hard to swallow considering where the campaign started, but it has to be said that it still suits the modern Australian palate much better.

Top things to see and do in February including WorldPride, Laneway Festival and Ed Sheeran

How an expression of tiredness, anxiety, fear, embarrassment, even flirting has become a sign of our times