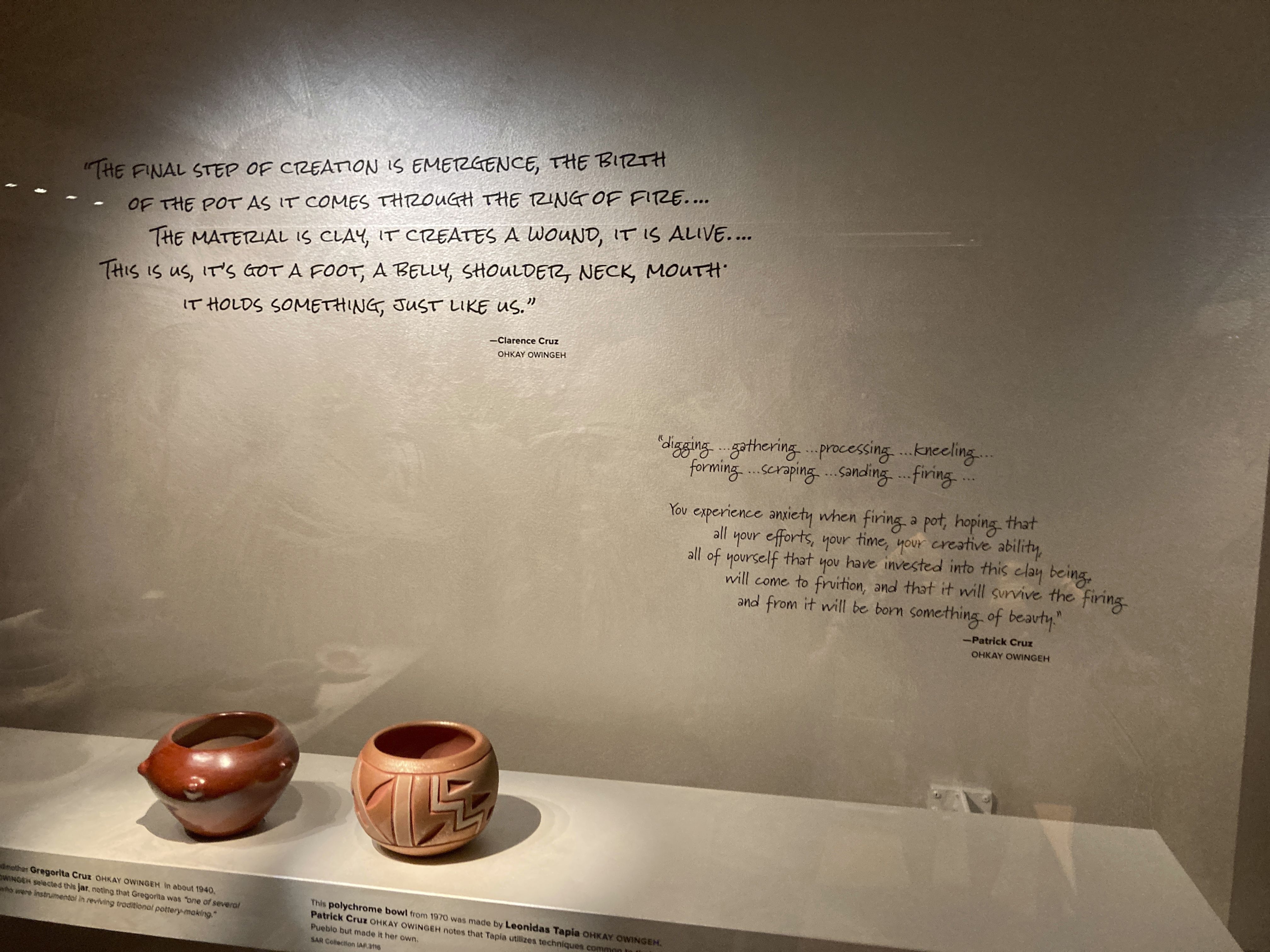 SANTA FE, N.M – Voices and artistry of Native Americans are the focus of a new touring exhibition of pottery vessels from the Pueblo Indian region of the American Southwest as major art institutions increasingly withdraw tribal communities to display ancestral art and artifacts.

A total of 60 Native American artists, museum professionals, storytellers and political leaders worked together to curate the exhibition.

Each selected some of their favorite pieces from institutional collections in New Mexico and New York, which did not always adhere to Indigenous perspectives. Personal statements and sometimes poetry accompany the clay ceramics.

Among the many curators, Tara Gatewood – a broadcaster and well-known voice on the daily Native American Calling talk radio show across the Indian country – selected an ancestral vessel adorned with curling arrows and made some 1,000 years ago.

For the exhibit, Gatewood asked the pot’s unnamed creator a few heartfelt questions.

“Is your blood mine?” she said. “Where else beyond the surface of this ship do your fingerprints appear on the blueprint of my own life?”

The exhibition ” Grounded in tone ‘ debuted July 31 at the Museum of Indian Arts and Culture in Santa Fe. She will travel to the Metropolitan Museum of Art in New York next year before making further stops at the Museum of Fine Arts in Houston and the Saint Louis Art Museum.

The majority of the approximately 110 pieces of ceramics in the exhibition come from the Indian Arts Research Center – once reserved for visiting scholars and archaeologists – on the campus of the century-old School of Advanced Researchin the middle of an affluent Santa Fe neighborhood with stucco houses.

For more than a decade, efforts have been made at the Center to transform the way Indigenous arts and artifacts are cared for, displayed and interpreted – with the guidance and collaboration of Indigenous communities.

The changes were initiated under Cynthia Chavez Lamar – recently appointed director of the Washington-based National Museum of the American Indian in Washington, DC. Efforts also created a number of Collaboration Guidelines This can help Native American communities everywhere communicate and build trust with museums.

The curators of Grounded in Clay are drawn from the 19 Native American communities of New Mexico, the West Texas community of Ysleta del Sur, and the Hopi tribe of Arizona.

These include a number of accomplished potters, jewelers, bead makers, fashion designers and museum professionals – among them the sculptor Cliff Fragua, who created the effigy of the leader of the 1680 Pueblo Revolt, Po’pay, which is housed in the National Statutory Hall in the US Capitol stands.

Elysia Poon, who led the curating process over a period of more than two years, walked through the museum gallery during the final touches before the opening.

“We’re trying to make sure everyone’s voice is represented in some way,” said Poon, director of the Indian Arts Research Center. “It’s either on the label or in the quote up here or in this panel. It is in poetic form, others in prose, others write more abstractly. Some really think about the pot itself…or vague memories of growing up potters, how that pot brings back memories.”

Pueblo pottery traditions rely on winding strands of clay into a variety of shapes and sizes—without a spinning potter’s wheel. Pots, plates or figures are often fired at ground level in improvised open-air kilns.

Brian Vallo, advisor to metropolitan museums and governor of Acoma Pueblo from 2019-21, has selected two pieces for the new touring exhibition – both with unmistakable connections to a comaknown for its mesa-top “Heaven City” and hundreds of contemporary artists and craftspeople.

He found her at the New York-based Vilcek Foundation, a participant in the traveling exhibition.

Something nice and refreshing awaits experienced museum visitors and curious tourists, he says.