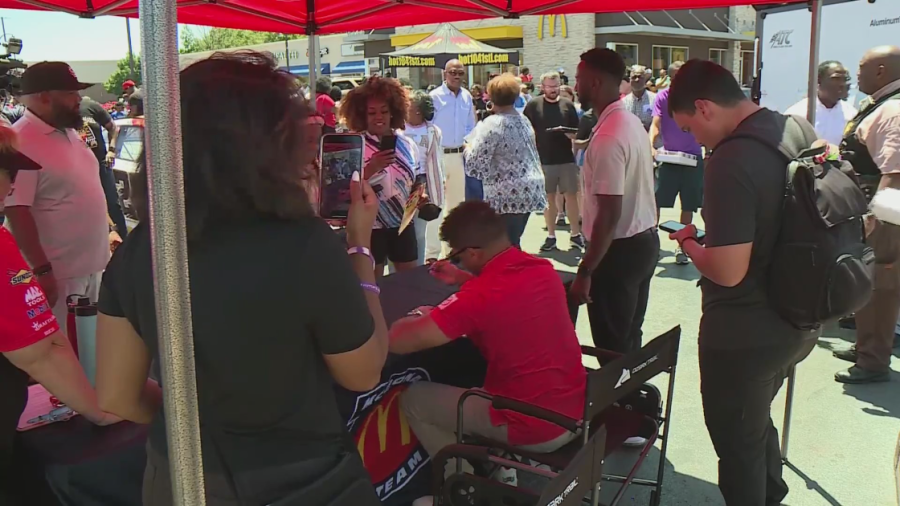 EAST ST. LOUIS, Il. – Bubba Wallace, a popular NASCAR Cup Series driver, spent the day visiting local children. He met with students at a McDonald’s in East St. Louis. He posed for photos, signed autographs and made a positive impression.

It’s a rare day when more people congregate in the McDonald’s parking lot than the drive-thru line during the lunch hour.

The full lot all because of NASCAR’s Bubba Wallace.

“Here to see Bubba Wallace and have his autograph signed,” said James Lefloie.

“I just want to meet one celebrity,” said Kevin Stevenson-Hines.

Wallace enjoyed the day interacting with the community.

“Out here at McDonalds with our nice 23 car. Give some autographs. Help make some great Macs. It’s a good day,” Wallace said.

In a city not traditionally known for NASCAR racing.

“I didn’t know what to expect. I’ve only been here once. To this area. And that was eight years ago,” Wallace said. “So it’s cool to see how many people actually came out and were all fans. So it really is something special.”

Many of these young fans, like Je’mori Wicker, were thrilled to meet Wallace.

“He is one of my absolute favorite racers. i just love him I like how many races he won. I like his car,” Wicker said.

But Wallace sees more in all the kid’s faces than just the excitement of meeting a celebrity.

“Lots of potential. Lots of options for them. It’s funny. You kind of look back when they’re that age, and it reminds you of when you were that age to just go out and have fun. Be with your friends, your family. And just out here getting autographs from someone famous. So hopefully they’ll remember that when they’re my age,” Wallace said.

As excited as they were to meet a NASCAR racing star, many of the kids in this crowd would have been even more excited if the car’s owner, Michael Jordan, had been here today.

“I don’t know if they really know who my boss is. They would have gone a lot crazier if they knew that,” Wallace said. “It’s cool. Obviously everyone is a fan of Michael Jordan, so to race for him and represent his number is very special. And to know that he has an impact on future generations is very cool.”

Wallace will compete in the Enjoy Illinois 300 race at World Wide Technology Raceway on Sunday afternoon at 2:30 p.m.

: A Chicago officer applied for a Section 8 housing voucher in 1993 — but only now 'made it to the top of the waiting list'