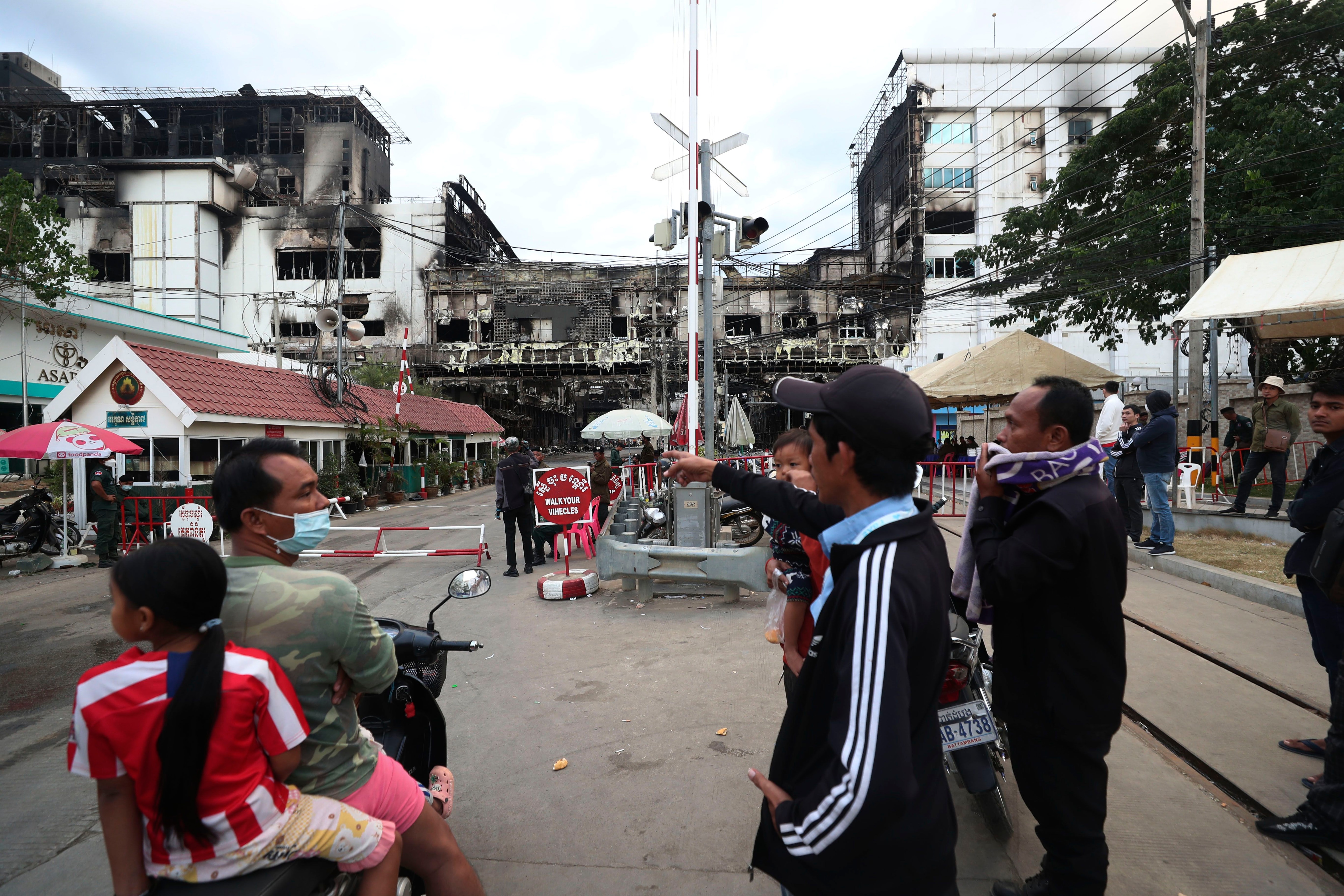 POIPET – The confirmed death toll from a massive fire at a casino-hotel complex in western Cambodia rose to 25 on Friday as searches for victims resumed, officials said.

The fire at the Grand Diamond City Casino and Hotel in the Thai border town of Poipet started around midnight on Wednesday and was extinguished more than 12 hours later on Thursday afternoon.

According to Sek Sokhom, head of Banteay Meanchey provincial intelligence department, 25 bodies had been recovered at the scene as of Friday morning. He said six bodies were found Friday morning, some in their rooms and others on stairs.

More than 60 people were injured, he said, and the death toll is expected to rise once rescuers are able to access victims believed to be under rubble or in locked rooms.

The Grand Diamond City casino complex has 500 employees and had 1,000 customers as of Wednesday, according to a report by Soth Kimkolmony, a spokesman for Cambodia’s National Committee for Disaster Management. It was unclear how many were present when the fire broke out and how many were able to get to safety.

An exact death toll has been difficult to ascertain due to the chaotic rescue effort and as many of those rescued were brought across the border for treatment in neighboring Thailand, which has better medical facilities.

Thai and Cambodian rescue teams have worked side by side to search the 17-story complex but paused their efforts overnight at the dangerously damaged site.

Many of the residents, both customers and employees, were from neighboring Thailand, which sent fire engines and rescue workers to help.

Thailand’s Sa Kaeo Provincial Disaster Prevention and Mitigation Bureau has counted 11 dead – all Thai – and 109 injured, including 57 in hospitals.

An initial investigation found the fire may have been caused by New Year’s decorations, which used too much electricity and caused the cables to overheat and burn, local authorities said.

“Hotel and casino workers used fire extinguishers to try to stop the fire but to no avail. People panicked and rushed everywhere, but mainly to the nearest exit,” he said. “I’m told there was a stampede at the main entrance as black smoke billowed through the building.”

He was quoted as saying he believed many of the deaths were from smoke inhalation and some people died jumping from high floors to escape the flames.

Poipet in western Cambodia is a place of bustling cross-border trade and tourism opposite the city of Aranyaprathet in more affluent Thailand.

Casinos are illegal in Thailand. Many Thais visit neighboring countries like Cambodia – a popular tourist destination with convenient international connections – to gamble. Poipet has more than a dozen casinos.

A short walk from the border checkpoint with Thailand, Grand Diamond City Casino is popular with customers making the four-hour drive from the Thai capital, Bangkok.

Cambodian Prime Minister Hun Sen made his first public statement on the tragedy at a road repair ceremony in southern Kampot province on Friday morning.

He expressed his condolences and said the incident shows that all tall buildings in the country must have adequate firefighting equipment. He also thanked all the people who worked on the rescue, including those from Thailand.