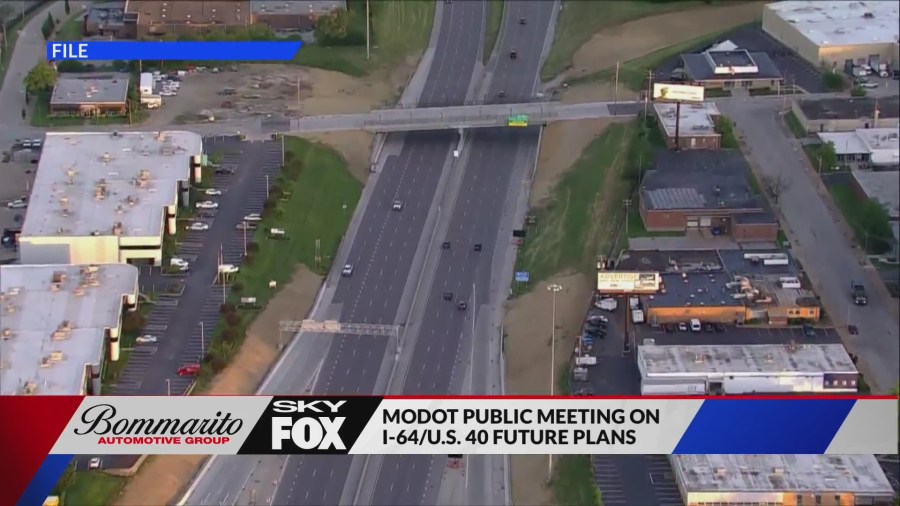 ST. LOUIS – Potential future improvements to Interstate 64 in the city of St. Louis were outlined at a MoDOT open house.

MoDOT focuses on the central corridor of I-64 between Jefferson Street and Kingshighway Street. Some of these potential changes could be made near Newstead Avenue, not far from Kingshighway Boulevard.

Bommarito Automotive Group’s SkyFOX of FOX 2 showed the view westbound across I-64 from Jefferson. MoDOT estimated that 64 in the area are in need of $100 million worth of bridge repairs.

MoDOT presented three different options at an open house in the cortex on Wednesday. Possibilities include everything from extending or building new ramps, to building bridges that would improve access to MetroLink stations, to creating bus-only lanes.

MoDOT welcomed public input at the open house and used many visual aids to help people understand the options.

MoDOT told FOX 2 a priority for citizens is improving safety and access along the corridor for cyclists and pedestrians.

Here’s some of what MoDOT and another person who attended the open house had to say.

“It’s just about time,” said MoDOT Area Engineer Jen Wade. “There’s no emergency here, but it’s time to invest in these structures — make sure they last for the next 50 to 70 years.”

Top Story: Police are searching for 5 escapees from the St. Francois County Jail


“It’s important to me to have good access to bike lanes, to have protected bike lanes, to be able to freely access some of these places in the north and south – railroad tracks and highways; quite important and I want to be able to see what ideas they come up with and what they share with us,” shared Jeff Stoecker of St. Louis.

Modot has said nothing has been selected yet, and it’s possible elements from each proposal could be included in a final plan. If you were unable to attend the open day but still want to give input, Click here.