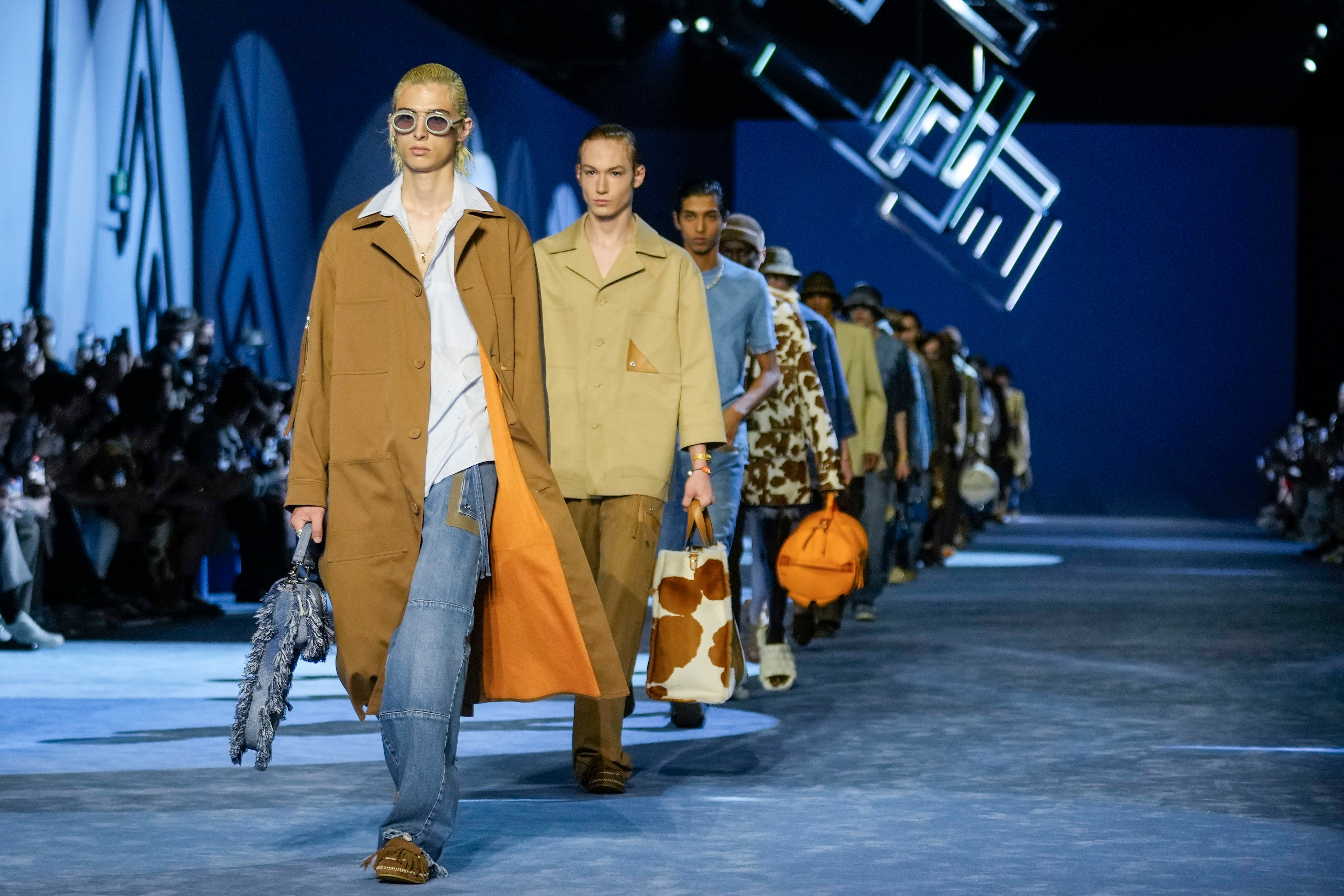 MILAN – Denim, fringes and chunky rubber sliders. These are the items for next year’s summer wardrobe, revealed on day two of Milan Fashion Week men’s previews.

Temperatures in Milan were unseasonably high and fashion crowds rushed from show to show, with temperatures topping 34°C (93°F) and forecasts to get even hotter in the coming days. This makes linen an easy sell, but less so for leather and even fur, which graced Milan’s Spring/Summer 2023 catwalks.

Milanese fashion houses Fendi, Emporio Armani and Dolce&Gabbana tried to inspire joy with collections that called for a return to leisure and some nostalgic notes. Highlights of the shows on Saturday:

Turning to the next generation, Versace reinvents the brand’s iconic Medusa in animated versions that seem to come to life as repeating patterns on silk. Call it pop baroque.

Donatella Versace returned to menswear with a fun and imaginative collection full of color and panache, shown in the courtyard of the fashion house’s central Milan headquarters. Mirrored columns came to life, casting images of classical statues.

In keeping with the younger generation’s concern for the planet, Versace replaced exotic skins with neon-accented python prints appearing as trench coats or trousers, supported by oversized pinstripe accent pieces. Leather looks made from eco-friendly latex have been well ventilated with a repeating diamond pattern.

Mixing design media and preserving prized possessions from the Versace Home collection, the new Versace man carries a precious urn, dangles a teacup from his belt and wears a spoon bent into a bracelet.

The catwalk featured the sons of classic Versace models such as Mark Vanderloo, Helena Christensen and Carla Bruni to drive the target audience home.

Marcelo Burlon celebrated the 10th anniversary of his label County of Milan with an inclusive outdoor catwalk show on an indoor athletics track.

The location tied in with the brand’s streetwear roots, opening with a graphic peace sign on an oversized sweatshirt and quickly switching the mood to a pastel patchwork jacket and cinch-waisted pant combo for him or her.

Burlon’s models covered a wider than usual age range, from a young girl in a dark suit featuring the brand’s feather motifs, to a grey-haired male model in a light-colored, matching and clashing patchwork tunic and trousers, paired with a suit jacket was crowned.

“I’ve always seen myself as a culture wanderer, with a growing network of creative, cool people, and that includes people of all ages and backgrounds,” Burlon said. “I guess you could say my goal is a contemporary melting pot.”

Italian Olympic gold medal sprinter Olympian Marcell Jacobs walked the show in a blue work overall. At the end of the show, the lap of honor went to Burlon.

The collection carried a touch of nostalgia for more innocent times, from frayed hems on jeans to soft stitching on jean pockets, embroidery accents reminiscent of beaded daisy necklaces, and long, lush tassels on moccasins. Bucket hats are cut out for a visor feel, while knitted cloches have a brim. Chunky rubber loafers were adorned with the inverted double F logo.

For a casual everyday look, denim trousers were worn with knitwear in matching tones, accompanied by Fendi totes in faded denim with a long fringed crossbody strap. For the beach there were short linen shorts with soft zippered jackets and chunky-soled loafers. On the dressier side are roomy Bermuda shorts in cream paired with a camel jacket and ocher back zip fastening, with the cut out bucket hat.

The swirling patterns of the earth featured on jacquard coats, intarsia knits and furs, and a pair of baggy overalls. The bags included a duffel and bucket combo in the shape of the lettering FENDI cut out in leather; a denim peekaboo incorporated as an external water bottle holder and light-colored tote bags were made from recycled plastic.

“It’s about a balance between decoration and simplicity,” Venturini told Fendi in show notes. “A timeless sense of freedom in play as we rediscover the luxury of leisure.”

Domenico Dolce and Stefano Gabbana have searched their archives for a new collection called “Re-Edition”, which takes inspiration from the past but is updated for the moment.

As if cleaning the slate, the designers opened the show with a barefoot model in a white tank and briefs.

Dolce&Gabbana mixed distressed elements with tailored pieces for a high-low fashion appeal. The fashion house’s traditional lace tops have been updated with a grungy distressed back, adding some streetwear credibility to the otherwise dressier piece. Frayed jeans were worn with a black jacket and white shirt unbuttoned to the waist – as with the entire re-edition collection, each piece carried a label with the original year of release and the 2023 season update, for a dose from time to time.

Patchwork denim became statement pieces, with knee-high boots that appeared to be molded from denim jackets paired with patchwork shorts, leaving only a glimpse of the leg in between. A soft white terrycloth tracksuit gave way to the familiar Dolce&Gabbana adornment: a crystal-studded rose-patterned jacket, worn with ripped white jeans and rhinestone-studded velvet slippers. Shoes included furry slippers, canvas or macrame sneakers with rope laces.

“I love the freedom of expression they have,” said stylist Apuje Kalu, who watched the show from the front row alongside NFL quarterback Tyrod Taylor and NBA players Rudy Gay, Jaren Jackson Jr. and Corey Kispert. “This use of color, texture and print, they’re not afraid to do that for men. You don’t always see that.”

The Emporio Armani collection carried the carefree touch of summer, from light chambray tones to faded coral prints. The point of the looks was that it’s time to get back to simple pleasures.

Soft shirts, vests and jackets with dramatic flaps, stand-up collars or zipper accents were paired with streamlined cargo shorts or pleated pants, often with informal slits at the leg.

Beachy looks, including drawstring pants and sheer knitwear, were finished off with chunky rubber slippers, while more urban, sophisticated, tailored looks – including a range of black and white one-piece suits – were grounded down with thick-soled black shoes.

Models of all colors wore hair in cornrows, which show notes said was “ironically overdone” and perhaps encapsulated the collection’s theme of a woven summer basket described by the fashion house as “full of surprises that bring holiday spirit to the city.”

As if to underscore the need for joy, a reggae dancer rushed through the middle of the stage to end the show.