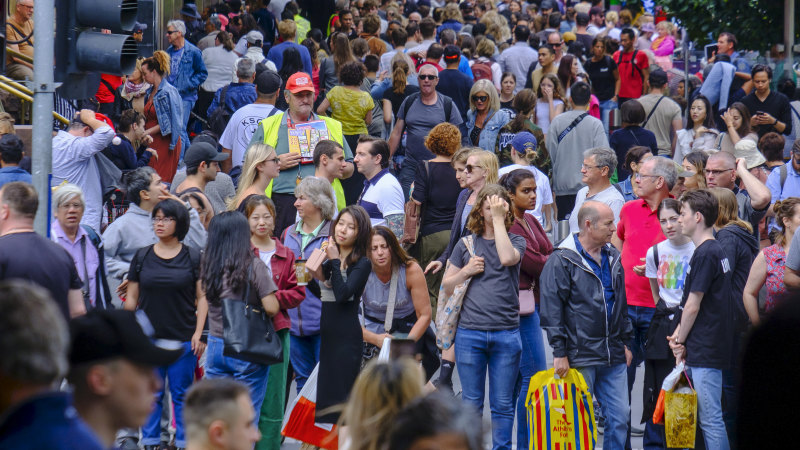 This would have a profound impact on the cost of healthcare, elder care and old-age pensions.

The 2021 Generations Report indicates that population aging will reduce the number of people in work, which means fewer people will have to pay income taxes.

“This poses long-term economic and fiscal challenges similar to those in most comparable countries,” the report said.

Migration slows down this aging effect because migrants tend to be younger. In many cases they move to Australia to study and then stay as skilled migrants.

These workers pay taxes in Australia, which helps fund our healthcare and elder care services, which are becoming increasingly expensive as the nation ages. They also spend money here, help keep the economy running, and other people in various jobs.

I’ve received a lot of correspondence over the past week from people who don’t like the idea of ​​Australia taking in more migrants. Won’t that exacerbate our aging problem in the future? What about the amount of housing or infrastructure including roads?

The government does need to ensure there is enough infrastructure to support our growing population and the Intergenerational Report found that migration is not a complete solution and should be well managed to maintain Australia’s high standard of living.

But what happens if we don’t take in enough migrants? Here are lessons from the country with the oldest population – Japan. According to the OECD, their fertility rate is 1.33 and their average age is 48.7 years, rising to 54.7 years by 2050.

The government there fears a growing wave of business closures as owners reach retirement age and no one can replace them despite healthy earnings, a recent study highlighted New York Times Article. Key businesses there could close, as could many workers who might be able to take the reins themselves near retirement.

This is just one example of the risks facing an aging country.

After my grandparents arrived in Australia, they became a chef, a train driver and a school principal. Together they had five children and more than a dozen grandchildren who had jobs as diverse as artists, vets, doctors, social workers and yes; a journalist.

In their little way, my grandparents came to Australia and made the most of their new circumstances and what this country has to offer. People like you will help shape the future.

Fascinating answers to perplexing questions, delivered to your inbox every week. Sign up for our new Explainer newsletter here.

https://www.smh.com.au/business/the-economy/my-grandparents-helped-shape-australia-migration-will-also-be-key-to-our-future-20230108-p5cb2r.html?ref=rss&utm_medium=rss&utm_source=rss_business Migration will be key to Australia’s future

Marrinawi Cove in Barangaroo opens for swimming this week